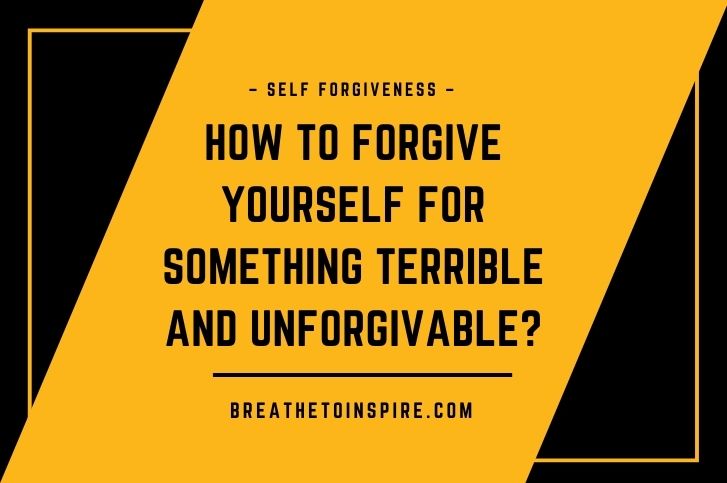 Self-forgiveness is necessary if you want to live with a peaceful mindset.

If someone has wronged you or you have done something unforgivable, you might ask how to forgive yourself for something terrible? However, it’s important to understand forgiveness isn’t about saying, It’s okay.

Forgiveness is about understanding that there are no bad people, just bad situations, and having compassion for everyone involved.

It takes empathy to be self-compassionate, so if someone is unkind towards you it could be because they’re having a rough day or didn’t mean any harm by what they said or did.

Even the most perfect person is capable of doing something terrible. You just need to learn to forgive yourself and start over.

We are all imperfect, and we are all capable of doing terrible things. But you can forgive yourself for your mistakes, learn from them, and start over with a clean slate.

In this guide follow these 5 different ways and 5 steps to forgive yourself for something terrible.

Recommended reading for you: Self-forgiveness: How to forgive yourself (complete guide)

How to forgive yourself for something terrible?

Everyone is guilty of doing something wrong at some point in their lives, but it’s important to forgive yourself for those mistakes.

Forgiving yourself for something terrible and unforgivable can be a long, hard journey. If you have done something so atrocious that you can’t imagine a time when it will be in your past, consider all of these ways you can work towards self-forgiveness:

No matter what you have done wrong or hurt someone with, you are worth forgiveness. You have reasons for doing what you did and they do not even have to be good ones.

Yes, it is true that there are things we all do that are simply inexcusable and heinous crimes against humanity. In fact, chances are good that if you feel like forgiving yourself over something it isn’t nearly as bad as anything most people think is unforgivable anyway.

If you did something terrible and unforgivable, it can be difficult, if not impossible, to move past it.

For many people who have done things they truly regret but can’t take back, living with their mistake for an extended period of time becomes emotionally painful—it hangs over them like a dark cloud that won’t go away.

And yet, these same people rarely see forgiveness as a viable option; they don’t know how to forgive themselves. It’s not that forgiving yourself is easy; it’s just that giving up isn’t an option either.

The goal here is not self-flagellation or self-hatred; instead, your job is simple: accept responsibility for what happened, let go of any anger or resentment toward yourself (or others), and try to make good choices moving forward.

5 steps to forgive yourself for something terrible

Step 1: Face what you did head-on.

The first step in forgiving yourself for a mistake is to admit that you have done wrong and own up to it. It can be anything from a blatant lie to an omission- anything that you know deep down is not the right thing.

Face whatever it is that you feel guilty about. It’s only by facing up to it that you can move past it and truly begin your healing process.

Make a list of all of your terrible mistakes, however big or small they may be, and then take a look at them in detail.

What exactly have you done? If it helps, ask a close friend or family member for advice—this could be key when it comes to taking responsibility for something awful.

Step 2: Consider why you did it.

You don’t have to justify what happened, but asking why allows you to explore your role in things from all angles.

For example, if you cheated on your partner, were there any deeper issues involved? Were you unfulfilled in some way? This might not help ease your pain, but finding out why will help you understand yourself better.

Step 3: Explore ways to repair your relationship with others.

Next, you need to come up with a plan of action on how you are going to fix the mistake that you made. Be honest with yourself about what needs fixing.

Even if they aren’t willing to talk with you just yet (if ever), think back to times when things were better between you two.

Can anything good come out of all of this bad news?

Don’t let negative emotions get in the way here; try instead to imagine what healthy interactions might look like between both parties.

Step 4: Think about ways that can make amends for everyone involved.

Sometimes it doesn’t matter if other people know what happened. For example, perhaps it’s time to give your partner space until they’re ready to trust you again.

However, if making direct amends is an option, keep in mind that these are powerful actions that will ultimately allow you to heal on many levels.

Step 5: Stay accountable for everything you do.

Letting go of guilt isn’t easy, but staying accountable for all of your actions is one of life’s greatest tools for self-improvement. Practice forgiving yourself every single day—for everything big and small. Remember, growth requires some pain!

5 Ways to forgive yourself for something terrible

1. Remind yourself of your good qualities.

We have all done bad things in our lives. No one is perfect and everyone has at least one thing they feel guilty about.

That’s OK because you also have a lot of good qualities that make up for any mistakes you might have made or anything bad you’ve done.

Sometimes we become what we do rather than doing things because we see them as who we really are.

In fact, sometimes we do terrible things without even thinking about it because deep down inside, no matter what it is or where it came from, we know that’s not who we’re supposed to be anyway.

If there is one important lesson to learn when dealing with forgiving yourself, it is that imperfection goes hand-in-hand with humanity.

There’s no such thing as perfection in people because there isn’t perfection anywhere else either.

4. Let go of guilt so you can move forward.

Guilt will only hold you back by stopping you from moving forward in life and accepting future opportunities to change yourself or improve upon things so they don’t happen again.

Forgiving yourself allows guilt to go away so you can stop living life for yesterday and start looking toward tomorrow instead.

5. It doesn’t mean you didn’t care; it means you did care enough to try harder next time.

This is one mistake people often fall into when attempting to forgive themselves for something bad. They say they didn’t care enough, but they did think about whether or not their actions would hurt someone else.

Actions speak louder than words, after all—even though many times we think words are just rationalizations for our actions later on anyway.

Remember that Self-forgiveness doesn’t mean you won’t feel negative emotions from time to time. Even those who have been through a complete forgiveness process may still occasionally feel resentment or anger toward themselves or other people.

Forgiveness is a continual learning process that leads toward a healthy acceptance of what happened and a hope for a better future. And remember: The next step in your journey toward self-forgiveness is up to you! Good luck!