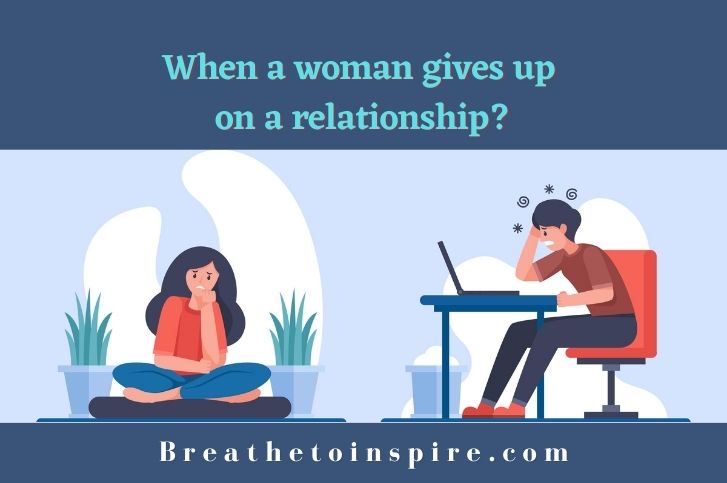 When a woman gives up on a relationship?

A study was done on 994 men and women combined. As per their research when a woman gives up on a relationship depends on many factors.

However, their results show that the stronger reasons to leave a relationship are Lack of satisfaction, lack of commitment, love compatibility issues, and need for personal fulfillment.

Whereas the weaker reasons to leave a relationship are: Looking for an alternative or a new relationship, investments, being alone, and having no family and friends support.

If you wonder why a woman gives up on a relationship, then in another research, a study conducted by Daily Mail through polls in the UK on 1000 women found.

Approximately 50% of women in relationships have a backup in case of separation from their current partner.

Nearly 1,000 women responded to the survey, and some said that Plan B could be someone they have known for as long as seven years. Additionally, one out of 10 women said their Plan B had already confessed their feelings to them.

Four out of ten women claimed that they had familiarized themselves with the other man during their existing relationships. Additionally, a minority of women said that their feelings for their backup plan were the same as those they had for their partner.

Approximately twelve percent of the women gave their current partner a higher ranking than their feelings for Plan B, according to a study published in Daily Mail.

Although the studies conducted are only on a small number of women. They don’t apply to the majority.

So, when a woman gives up on a relationship?

Basically, the answer, of course, changes based on an individual woman. However, there are some patterns.

A woman gives up on a relationship when she no longer sees a future with her partner. She can’t think of any way that the relationship will change for the better. No matter how much she loves him, she won’t stay with him.

A woman gives up on a man for various reasons. Some are beyond her control, like his infidelity and toxicity.

Usually, a woman will give up on a man if she feels that the relationship is not working for her. She feels trapped or unfulfilled. It doesn’t have to be romantic. If a man only wants sex, then she may feel used.

If a man is not emotionally available, then he may not be worth fighting for.

A woman who gives up on a man is manipulative or cruel. She genuinely feels that the relationship is not working and wants out.

11 Reasons why a woman gives up on a relationship.

1. She is no longer happy and feels lonely.

Getting into a relationship should be exciting. You’re looking forward to the future, and you enjoy being in each other’s company.

But as time goes on, the sparks should die down. If she is no longer happy in your relationship, it might be time to call it quits.

The betrayal of a partner’s trust can be enough to end a relationship. But often, cheating isn’t the reason for a relationship’s end.

Women who are victims of infidelity are often hurt, angry, and embarrassed. Their hearts are broken. And their self-esteem takes a hit.

If their partner is cheating on them, it’s often because they aren’t happy in the relationship.

Women who leave a relationship because of cheating often don’t want to deal with the heartache and humiliation of finding out they’re being cheated on again.

Relationships often fail when one or both partners are too insecure to give love a chance. Sometimes, a woman will bail on a relationship because she feels insecure.

Other times, she may not feel emotionally ready for a relationship and doesn’t want to get hurt again.

4. She is no longer in love and lacks chemistry.

Falling in love is an intense feeling. But it’s also temporary. If a woman is no longer head over heels with her significant other, she might be trying to move on.

She has stopped trying. If a woman hasn’t made the first move, it doesn’t necessarily mean she’s giving up.

But if she hadn’t tried to initiate contact with you or initiate plans with you, that’s a bad sign. If she is interested in you, she’ll make sure you’re on her radar.

5. She lost interest in physical and emotional intimacy.

She has no interest in the relationship anymore. Physical attraction can be fickle, but most women experience at least some level of passion in a relationship. If that fire goes then it’s hard to make it click again.

S#x is an important aspect of a relationship, and if it’s gone from your life, it might be time to re-evaluate your relationship. Again, women won’t give up if there’s no s#x. But she may not also put up with a guy who doesn’t satisfy her needs.

The moment she physically and emotionally stopped investing in a relationship, then it’s a good reason that she had already given up on the relationship.

6. She’s bored and looking for a backup partner.

When you’re in a relationship, you have to focus on the other person. But if you’re bored with your relationship, it might be time to call it quits.

Some women give up on relationships because they are looking for a partner. Such women, when they find that their man loses interest in her, conclude that he cannot stand her. And they look for another or turn to their ex.

7. Lack of trust and respect.

In a healthy relationship, a man and a woman feel a sense of safety with each other. They’re not afraid, to be honest with one another, and they trust one another.

Trust is an important part of any relationship, so if it’s gone, it might be time to move on.  If a guy is spending less time with her, or he’s not communicating, she’s less likely to stick around.

A lack of respect is also a huge turn-off. A woman doesn’t put up with this and will make sure the guy knows she isn’t happy.

Money is the cause of many arguments. But if you and your partner are constantly fighting about money, it might be time to call it quits.

9. Lack of communication and openness.

A woman gives up on a man who stops communicating with her. If he ignores her calls or emails.

Being in a relationship means spending time with each other. But if she constantly avoids the man. And no longer feel comfortable when both are around, then it’s a true sign that she gave on the relationship.

10. When a man is too controlling and abusive.

Sometimes, controlling behavior in relationships can be an indicator of abuser behavior. When a man feels the need to control the relationship, he might feel entitled to it. He may deny her access to her own money.

For example, or prevent you from doing certain things. However, not all-controlling behavior comes from a place of abuse. In some cases, it might just be a sign that the relationship itself is unhealthy and in need of repair.

11. When a man doesn’t have a great personality or is immature.

If he’s the initiator, there’s a good chance the relationship is one-sided. The woman isn’t getting anything out of it except for a sense of obligation. Then she loses interest in that relationship.

Related Article: How to know when to leave a relationship?