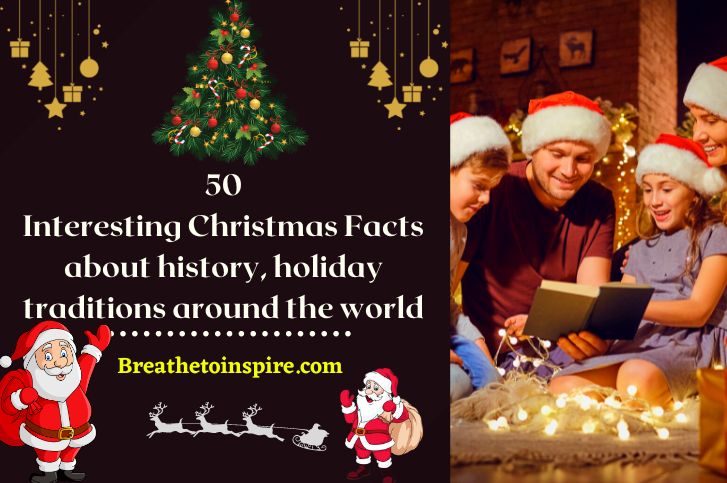 The holiday season is one of the most magical times of the year, and Christmas is the star of the show. Every year, people share stories, songs, and traditions that bring the festive spirit to life.

So, what better way to get into the festive spirit than to learn some fun facts about Christmas?

From the origins of the Christmas tree to the history of Santa Claus, here’s a look at some of the most interesting Christmas facts that you may not know.

Christmas has been celebrated for centuries, and it has a long and fascinating history. The celebration of Christmas goes all the way back to the 4th century, when it was first mentioned in Roman writings.

Over the centuries, different countries and cultures have added their own traditions and customs to the holiday, resulting in the wide variety of practices we see today.

Did you know that the tradition of sending Christmas cards dates back to 1843, when the first card was sent by Sir Henry Cole in England?

The first card was a simple design featuring an illustration of the family of a public official wishing them a Merry Christmas and a Happy New Year.

How about the fact that the traditional Christmas tree was first decorated with real candles? This was during the early 1800s in Germany and the tradition has since been adapted to be more fire-safe with electric lights.

Did you also know that the song “Jingle Bells” was originally written for Thanksgiving, not Christmas? It was written by James Pierpont in 1857 and was originally titled “One Horse Open Sleigh”.

The tradition of giving Christmas presents has been around since the 12th century, when the Three Kings presented baby Jesus with gifts of gold, frankincense, and myrrh.

Today, this tradition has been modernized and expanded to include all sorts of gifts for family and friends.

Furthermore, the festive red and green colours associated with Christmas actually come from the colours of holly, which was a sacred plant in many ancient cultures.

Also, did you know that during World War I, soldiers in the trenches sang Christmas carols to each other in order to boost morale? This was a small act of peace and solidarity during a time of war.

The Christmas tree is a beloved part of the holiday season, and its origins date back to 16th century Germany.

The first decorated Christmas tree was set up in the town of Riga, Latvia in 1510, and the tradition spread to other parts of Europe and eventually to the United States.

The modern Christmas tree is decorated with lights, ornaments, and tinsel, and is often topped with a star or angel.

If the above Christmas facts have blown your mind, in this blog post, you have 50 more such Amazing facts about Christmas that make you go wow! Read till the end to learn the traditions and history of Christmas around the world. Have Fun!

The following is a list of Christmas facts that are related to the holiday:

1. The Short term for Christmas is called “Xmas”

Think of Christmas and its shortened version, Xmas. The word Xmas appears nearly everywhere, from holiday ads to holiday cards. It is composed of the words ‘Christ’ and ‘mass’.

In Viking times, Christmas was called “Yule”, which is pronounced the same way as the Norwegian word for Christmas today, “Jul”. During the Viking era, the Vikings believed Odin, the great god and father of other gods, would visit them in their homes at night.

The first recorded incidence of Christmas being celebrated actually dates all the way back to the Roman Empire in 336, during the time of the Roman Emperor Constantine – so technically the Romans invented it, although there’s no specific person who is credited with having done so.

5. Saturnalia is the pagan name for Christmas

Saturnalia, held in mid-December, is an ancient Roman pagan festival honoring the agricultural god Saturn. Due to the holiday’s proximity to the winter solstice, Saturnalia celebrations are the source of many of the Christmas traditions we know today, such as wreaths, candles, feasting and gifts.

Here is a list of Funny christmas facts that are fun to know:

In fact, the origins of Santa Claus can be traced all the way back to a monk named Saint Nicholas, who was born between 260 and 280 A.D. in a village called Patara, which is part of modern-day Turkey.

2. Imin was the first elf

The first Elves to awaken were three pairs: Imin (“First”) and his wife Iminyë, Tata (“Second”) and Tatië, and Enel (“Third”) and Enelyë. They walked through the forests, finding other pairs of Elves, who became their folk.

SantaClaus.com states that Santa’s birthday is on March 15. Mark it on your calendar for next year!

4. Until Age 8 Most Kids believe in the existence of Santa

A study from 1978 found that about 85 percent of young American kids believe in Santa, and researchers today confirm those numbers still hold true, with many kids believing until about age eight.

The name, Santa Claus, was stated to evolve from Nick’s Dutch nickname, Sinter Klaas, a shortened form of Sint Nikolaas, which is translated as the Dutch name for St. Nicholas

The following are some Interesting Christmas Facts:

1. Adam of Saint Victor is the father of Christmas carols?

In the 12th century the Parisian monk Adam of Saint Victor began to derive music from popular songs, introducing something closer to the traditional Christmas carol.

In medieval Jewish texts, the holiday is referred to as Nittel, derived from the Medieval Latin Natale Dominus which is also the etymological source of the French name for Christmas Noël.

3. Joseph was the legal father who raised Jesus.

According to the Gospels, Mary, a virgin betrothed to Joseph, conceived Jesus by the power of the Holy Spirit – and therefore Christians consider Jesus the Son of God. However, most Christians understand Joseph to be a true father in every way except biological.

James Lord Pierpont was an American songwriter, arranger, organist, Confederate States soldier, and composer, best known for writing and composing “Jingle Bells” in 1857, originally titled “The One Horse Open Sleigh”. He was born in Boston, Massachusetts, and died in Winter Haven, Florida.

5. Nagar Sakthan Thampuran Ground was the largest gathering of Santas.

An astonishing 18,112 Saint Nicks came together at the Nagar Sakthan Thampuran Ground, Kerala, India, on 27 December 2014.

Here are some of the Best Christmas history facts:

1. The world’s tallest cut Christmas tree was a 221-foot Douglas fir erected in 1950 in the town of Woodinville, Washington.

3. The first electric Christmas lights were developed in 1882 by Edward H. Johnson, an associate of Thomas Edison.

4. The traditional colors of Christmas — red and green — are inspired by the colors of holly berries and evergreen trees.

5. The first Christmas card was created in 1843 by a London-based civil servant named Henry Cole.

7. The first person to decorate a Christmas tree was the Protestant reformer Martin Luther, who is said to have first added candles to a tree in the 16th century.

8. The traditional Christmas colors of red and green have been used since the 16th century.

9. The first artificial Christmas trees were made in Germany in the 19th century.

10. The first commercial Christmas card was produced by Sir Henry Cole in 1843.

Here are some Interesting and random Christmas Trivia facts:

11. The first Christmas stamp was issued in the United States in 1962.

12. Santa Claus is believed to have originated from a 4th century monk named St. Nicholas.

14. Christmas trees have been decorated with popcorn since the late 19th century.

17. The first Christmas movie was released in 1898 and the movie name is “Santa Claus.”

18. The first Christmas television special was aired in 1957.

19. The first Christmas postage stamp was issued in the United States in 1962.

20. The tradition of sending Christmas cards began in England in 1843.

Facts about christmas trees, movies, songs and traditions around the world

Here is a list of some facts about christmas trees, movies, songs and traditions around the world:

22. The use of poinsettias as Christmas decorations originated in Mexico.

23. The traditional 12 Days of Christmas song was first published in 1780 in England.

24. The first candy canes were all white and were invented in Germany in the 17th century.

25. The Christmas tree as we know it was first introduced to England by Prince Albert, husband of Queen Victoria, in the 1840s.

27. The first eggnog was made in the United States in the early 1700s

28. The traditional Santa Claus costume of red and white was popularized by the Coca-Cola Company in the 1930s.

30. The first Christmas tree in the White House was set up by Benjamin Harrison in 1889.

10 shares
This page may uses affiliate links. When you click an affiliate link, we get a small compensation at no cost to you. See Our affiliate policy for more info.