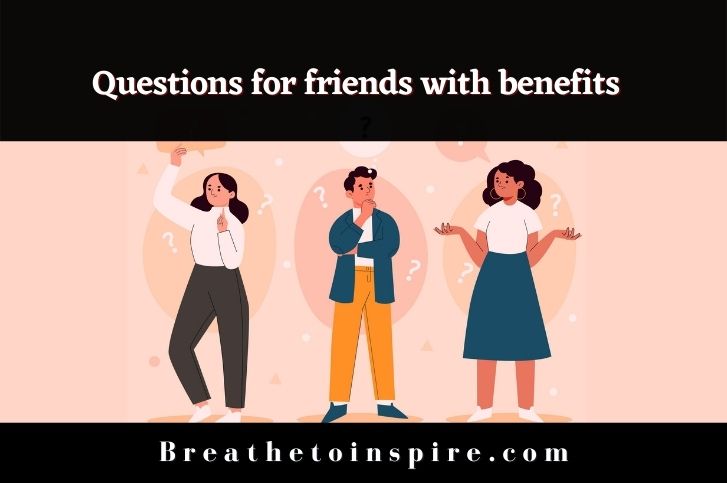 Deciding to enter into a friends-with-benefits (FWB) relationship, ask yourself and your fwb these questions:

Before considering some of the potential questions for friends with benefits, one more thing you need to do is understand what your expectations are for that relationship. What is it exactly that you want from someone who you’re only sleeping with? Do you want a new friend in addition to getting some action, or are s#x and friendship mutually exclusive?

You need to make sure both of you have an idea of what each other wants so there aren’t any surprises down the road. Just like every other type of romantic relationship, clear communication is key.

And since s#xual health needs to be addressed in any FWB situation—because there’s still no such thing as safe s#x when you don’t know someone well—talk about STDs, protection and pregnancy before things get physical.

Be honest with yourself and your partner: If you happen to be having multiple FWBs at once (we don’t recommend doing so unless they know about each other), now would be a good time to disclose that information.

Knowing what everyone has going on will help reduce risk as much as possible. One important thing to keep in mind is that if one of you wants something more out of it than just casual s#x, then only sleeping together could really cause problems down the road.

In fact, we think it might even spell trouble right off the bat! Many relationships have ended because one person was looking for something else and their partner wasn’t, making it difficult for either side to compromise down the line.

If both people are cool with whatever comes up between them s#xually without expectations or strings attached, then by all means have fun!

Related: 100+ Questions to ask your friends with benefits

Questions for friends with benefits

Here is a list of questions for friends with benefits you need to ask yourself and your FWB.

1. Are you emotionally stable?

3. Is your friendship strong enough to handle it?

4. Do you have similar interests and goals?

5. Are both of you being upfront about what you want from a FWB relationship?

6. Have both of you agreed on parameters for ending or continuing your FWB-type relationship should circumstances change, or has one person made an assumption about how far into a FWB-type situation he/she is willing to go based on assumptions rather than discussion with their partner(s)?

7. Are both of you willing and ready for an emotional connection (even if short term)?

8. Do both of you need someone in your life immediately?

9. Does either of you have an addictive personality?

10. Do both of you agree that relationships should be mutual agreements between people who are treated with respect and where all members are afforded equal input into decisions that affect them?

11. Will any future relationship between you end as a result of having s#x first then getting together as friends afterwards?

12. If there’s history between two people involved, e.g., same circle of friends, same school, previous romantic relationship(s), etc., does one person feel like they’re agreeing to take second place in favor of someone else who already had first place before he/she entered the picture (or vice versa)?

13. How long do each of you plan on doing FWB thing(s) before entering something more serious?

14. What would make FWB no longer work for each of you?

15. Who will deal with potential awkwardness when seeing friends socially now that one knows another after taking off his/her clothes or engaging in s#xual activity together previously?

16. Are STD’s currently discussed and clear between both parties?

17. Is birth control currently discussed and clear between both parties?

18. Will FWB continue after one friend moves away?

19. Where is safe s#x supplies kept by each person so neither needs to hunt around at home during possible impromptu sessions?

20. Is our agreement absolute between us regarding feelings?

21. Have we talked about whom we might date in future; is jealousy ok between us?

22. When parting ways will we say goodbye instead of just walking away without talking because we don’t know what to say anymore but try not to appear uncomfortable doing so out of politeness towards each other because feelings may exist after all despite just s#x arrangement(s).

23. When parting ways, will tears be shed by both persons whether male or female due to emotions connected with temporary loss of bond formed while enjoying FWB-type relationship(s).

24. Are you leaving feeling great with a smile upon your face and looking forward to next time and are you feeling good about yourself?

25. Are both of you communicating openly, honestly, and respectfully to reach mutually acceptable boundaries of FWB?

26. Is meeting each others’ friends important?

27. Are both partners planning on only FWB relationship(s) with each other, ever?

28. Is emotional commitment ruled out as unworkable between parties prior to starting FWB arrangements?

29. Is s#xual exclusivity ruled out as unworkable between parties prior to starting FWB arrangements?

30. Is hidden or separate s#x relationships outside of FWB arrangement(s) included in your understanding of what is allowed and will be tolerated, or excluded and strictly forbidden between both parties?

31. Have you decided upon what will happen should one person fall in love with each other after FWB arrangements began?

32. Have you decided who gets contact information of each other?

33. Are both still willing to wait until marriage for s#x within a monogamous relationship (with someone else)?

34. Are you able to walk away from an emotionally intense situation that could blow up on everyone if misinterpreted, unplanned for, or misunderstood?

35. Will both parties keep all appointments with each other, especially if inconvenient or necessary (emergency situations excepted)?

36. Will both parties schedule dates with each other even though one or both can’t make every appointment?

37. Are you able to trust someone else with your feelings?

38. Do you enjoy feeling passionate about someone?

Also read: 150+ friends with benefits questions that make you think

39. Are jealousies and insecurities under control for everyone concerned?

40. Have you discussed what things are going well and what’s not working so well between everyone involved to improve experience for everyone?

42. Will you make arrangements to see each other again?

43. Do both parties understand that friends-with-benefits arrangements are not considered official dating arrangements?

44. Do both parties understand that friends-with-benefits arrangements are not considered official relationships of any kind, just friends with benefits?

45. Are both people clear on why all s#xual activities and feelings stop abruptly, although friendship itself continues between parties once an agreed upon FWB arrangement(s) is over by ending such a relationship or by either party or by mutual consent?

46. Is it likely that one or both of you will use each other to relieve stress and loneliness (comfort s#x)?

47. Do you want to relieve stress and loneliness?

48. Are you comfortable with using each other for s#x?

49. Have both parties decided beforehand how far to go s#xually and what their s#xual limits are before they become involved in a friends-with-benefits arrangement(s)?

50. Are both parties aware that should one friend-with-benefits arrangement(s) become too physically or emotionally intimate, s#xual feelings will be stronger than originally agreed upon between both parties?

51. Will you refrain from telling anyone else about your friends-with-benefits relationship for as long as it lasts?

53. Will both parties refrain from mentioning their friends-with-benefits relationship to family members and nonfriends of opposite s#x for as long as it lasts?

Also read: Your complete guide to friends with benefits relationship.

55. Do you understand that if your arrangement becomes s#xual will be easy to become emotionally entangled before either of you is ready to be in an official long term committed relationship with someone else?

56. If you agree that your arrangement becomes s#xual, what safeguards will be put in place before either of you is ready to be in an official long term committed relationship with someone else?

57. Do both parties understand that it is absolutely inappropriate to tell friends or other people about your arrangement in any way?

58. Will both parties refrain from discussing their friends-with-benefits arrangement with everyone they talk to?

59. Will each promise not to go out of their way to start a fight if angry feelings occur?

60. Are you willing to discuss what happens should either one of you become involved with someone else after your FWB arrangement?

61. Do you agree to never have s#x with anyone in your extended circle of friends or acquaintances as long as you are involved in a FWB arrangement?

62. Do you realize that having s#x with other people is what makes a FWB arrangement go bad?

63. Do both parties understand that if one FWB arrangement becomes s#xual, it will be hard to refrain from becoming emotionally tangled in an official long term committed relationship with someone else?

64. If either party has trouble walking away after an FWB arrangement becomes s#xual, is there a danger of becoming involved in an official relationship before they are ready to do so?

65. Do both parties agree that if either party falls in love, or becomes involved in a long term committed relationship with someone else, no hard feelings will develop?

66. Have you discussed how you will explain an FWB arrangement to your current partner should they ask about it?

67. Are you willing to lie to anyone if it means protecting your friends-with-benefits arrangement?

68. Will you refrain from bragging about your friends-with-benefits arrangement with anyone else?

69. Will you refrain from posting anything about your friends-with-benefits arrangement on any social networking site?

70. Will you make sure that before an FWB arrangement occurs there is no one else in your life with whom it would be a conflict of interest?

71. Do both parties agree to inform each other immediately if they have s#x with anyone else, either before or after their FWB arrangement?

72. Have both parties agreed to a specified s#xual limit that must not be violated as long as they are involved in a FWB arrangement?

73. Are you willing to understand that if either of you becomes emotionally attached and it becomes clear there is no way for that relationship to work out, feelings will get hurt?

74. Are you willing to understand that if either of you becomes emotionally attached and it becomes clear there is no way for that relationship to work out, one or both of you will have to suffer emotional pain?

75. Do both parties agree to never threaten or blackmail each other in any way if their FWB arrangement ends?

Also read: What does FWB mean?

What are friends with benefits?