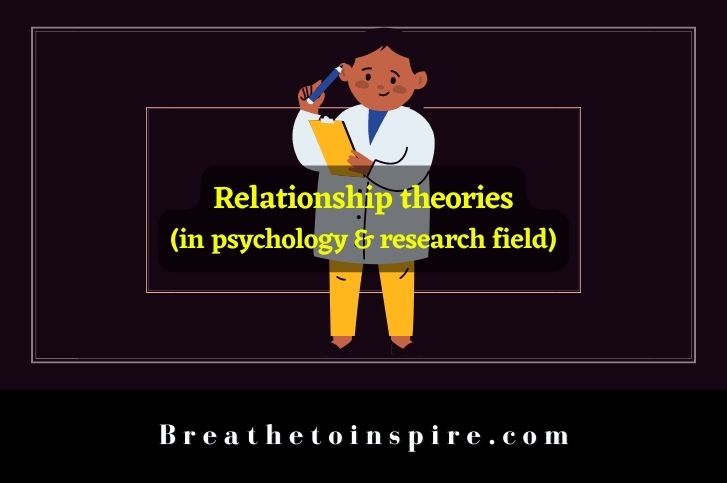 Relationships are fundamental to the social world, and this is especially true for romantic relationships.

Whether you want to deepen your understanding of psychology, or just fancy a little light reading on a Sunday afternoon.

In this guide explore a list of relationship theories and relationship studies that help you understand more about human psychology and also pursue this field if you are interested.

What is a relationship?

The term relationship has several meanings. The most general definition of a relationship is the connection or association between people or things, especially relationships of mutual dependence or interdependence.

The term can also be used to describe the nature of the interaction between people and social interaction in general.

It can refer to the quality of a person’s interpersonal relationship with others and the nature of that person’s connections with those people.

There are many types of relationships: However, here are some:

Love relationships: Love is one type of relationship that occurs because people care about each other and want to be with them. Love can be romantic, sexual, or platonic.

Friendship relationships: Friendship involves liking someone but not necessarily caring about them romantically. Friends usually spend time together doing things that they enjoy.

Family relationships: Family members often share feelings and thoughts with one another; they help each other out in times of need and comfort each other when they are upset by something outside their family units.

What are relationship theories?

Relationship theory is the study of human relationships as an objective phenomenon. It is an interdisciplinary field that includes psychology, sociology, anthropology, philosophy, and communication studies.

The field has been particularly influential in the fields of social psychology, sociocultural theory, and intergroup relations.

Let’s explore some important relationship theories and studies in the field of psychology.

These attachments are often characterized by one or more emotional bonds between individuals that provide security and comfort in an otherwise unpredictable world.

The way that an infant forms a secure attachment with its parents is thought to be critical to subsequent development, including intellectual and personality functioning as well as mental health outcomes such as anxiety disorders.

Insecure attachments are thought to contribute to depression, antisocial behavior, substance abuse, and other problems in adulthood.

Attachment has been linked to social cognition through the role of oxytocin in facilitating trust.

Attachment theory has its origins in the work of John Bowlby, an English psychoanalyst who worked with children during World War II. His research on human development focused on the relationship between parents and their infants, especially during the first year of life.

Attachment theory was later expanded by Mary Ainsworth in her study of mother-infant interaction, which examined patterns of attachment among children from birth through 12 months old.

Her work demonstrated that infants who develop secure attachments to their primary caregivers (usually their mothers) have greater emotional well-being than those who do not; this is reflected in their behavior as well as their responses to heart rate monitors used during therapy sessions.

These findings were later applied to adults in treatment programs for personality disorders such as borderline personality disorder, PTSD or major depression. Attachment theory has also been used to explain other forms of interpersonal relationships, including romantic love and friendships.

Social exchange theory is a psychological theory of relationships that states that people enter into relationships in order to obtain the benefits (e.g., self-esteem, companionship, and intimacy) or avoid the costs (e.g., rejection, shame) associated with them.

Social exchange theorists believe that people are motivated to engage in social interactions with others because they want to receive benefits from these interactions.

These benefits can be tangible like money or other goods or intangible like respect, approval, and recognition.

The person then adjusts his behavior accordingly so that he can receive more positive or less negative feedback from other people in order to maintain the balance of rewards throughout his life cycle (i.e., childhood, adolescence and adulthood).

Theories of social exchange explain why we seek out relationships in the first place, why we stay in them for as long as we do and why we sometimes want to get out of them.

For example, if someone likes you more than you like them, then you might feel more comfortable being friends with that person because it will give you more benefits than if you were only friends because you liked each other.

Social exchange theory was developed by George Homans, a sociologist. It first appeared in his essay “Social Behavior as Exchange,” in 1958. Homans studied small groups, and he initially believed that any society, community, or group was best seen as a social system.

It has been used extensively by sociologists as well as psychologists. Its major applications are in understanding how people form friendships, how they maintain them over time, and how they end them when they no longer benefit from the relationship (termination).

Social learning theory is a psychological theory that attempts to explain how people learn and adjust to their environments. According to this theory, people learn by observing others (social learning) and by using their own experiences (inductive learning).

The underlying principle behind social learning theory is that humans learn from each other through observation and imitation.

The main idea of social learning theory is that humans learn by observing others and by imitating them in various situations. This theory focuses on how people learn from one another, and how they can change their own behavior to match the behavior of others.

Social learning theory was developed by Albert Bandura in the 1950s. He believed that people could be taught new behaviors through modeling (a process in which a child learns from observing an adult). The theory became popular because it expanded on earlier studies of teaching and learning.

This theory can be seen as an extension of the person-environment fit theory which states that people are most likely to behave in a manner that is consistent with their personal goals and values when they have a good relationship with the environment (such as being liked by others).

Social learning theory asserts that people are more likely to act in accordance with their own personal goals when they have positive relationships with those around them.

The social learning theory has since been used in many fields of psychology, including sociology and education.

There are several applications of this theory: it can be used to explain how children learn new behaviors such as language and problem-solving skills.

It can also be used to explain how groups of people develop their own cultures through conflict and competition between different groups.

Finally, it can be used to predict how individuals will behave if they are exposed to certain situations or events that

Applications: Social learning theory has been used in many different fields including,

Evolutionary psychology is a branch of psychology that attempts to account for human behaviour by drawing on the theory of evolution by natural selection.

The field’s focus is on common human experiences, such as mating behaviour, parental investment, and sexual selection.

The history of evolutionary psychology began with Charles Darwin, who said that humans have social instincts that evolved by natural selection.

Darwin’s work inspired later psychologists such as William James and Sigmund Freud but for most of the 20th-century psychologists focused more on behaviorism and proximate explanations for human behavior.

Evolutionary psychologists believe that many traits and behaviours are adaptations or products of natural selection.

For instance, women who are attractive to men are more likely to be chosen as mates and/or mothers; thus, these women will pass down their attractive physical features to their daughters. In this way, beauty becomes “inherited” through sexual selection.

Another example is the peacock’s tail: males with large tails are more successful in attracting females than those with smaller tails.

This represents another case where an unusual trait was selected because it aided the male in attracting mates or defending territory against other males.

According to evolutionary psychology, we are hardwired to behave in certain ways that benefit our species’ survival over other species’. We have evolved over millions of years and adapted ourselves through millions more’. This includes our social interactions and how we relate to others.

Evolutionary psychologists believe that many of the instincts and behaviors people display are adaptations designed by natural selection to promote reproductive fitness.

The Social ecology theory, a combination of anthropology and sociology, examines people by considering the environment or context in which they live.

As they relate to relationships, social-ecological models explain the dynamics of relationships from the point of view of the external forces operating upon people in relationships, whether they are family members, friends, or romantic partners.

The major element of this theory is that it stresses the importance of human interactions. We may think of ourselves as individuals, but we are actually part of a larger community; therefore, we can never really be alone.

This theory helps us to understand how people interact with each other and why some relationships work better than others.

Social ecology also suggests that there is no one way to be human—rather, we all have different ways of behaving depending on our culture and background.

For example, an Eskimo might be very shy whereas someone from New York City would not think twice about going out alone at night

In both cases their behavior would be considered normal for their society; however, for an outsider these behaviors might seem strange or even alarming.

2 shares
This page may uses affiliate links. When you click an affiliate link, we get a small compensation at no cost to you. See Our affiliate policy for more info.