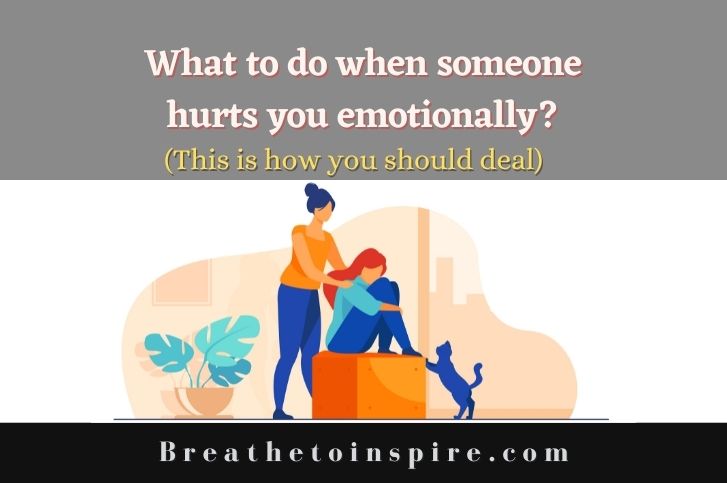 There are times when the person you’re angry with or hurt by is someone you care about deeply. Sometimes, that person is someone you’re married to or living with.

At those times, it’s painful to have to deal with someone who’s hurting you, but there are ways to cope.

Being hurt by someone you love can make you feel like you have no control over that person’s actions. You may feel guilty for feeling hurt. You may feel like the relationship is doomed.

It can be especially hard when the person causing the problem is someone you love. It’s even more painful when they hurt you again.

But you do have the power to take control. Here are a few things you can try:

Recommended reading for you: How to deal with someone who hurt you emotionally? (step-by-step guide)

What to do when someone hurts you emotionally?

An emotional reaction is natural when someone hurts you. But anger or sadness aren’t the only emotions you’re entitled to feel. You’re also allowed to feel hurt, betrayed, depressed, fearful, anxious or ashamed.

Your response to a person who hurts you can be based on how he or she makes you feel. If you feel angry, your instinct might be to respond in kind. If you feel hurt, you might react by withdrawing. If you feel ashamed, you might withdraw even further.

Think about it this way:

If you hurt someone physically, you can physically harm them back. A person can hurt you mentally, but you cannot harm them physically.

Unfortunately, “how” you choose to respond has a lot to do with you.

If you respond to your hurt with anger and resentment toward the other person, you’re likely to harm yourself or even feel guilty after you hurt them back.

If you respond to your hurt with love toward the other person, you’re likely to grow and have a chance of helping them to realize their mistakes.

Questions to ask yourself when someone hurts you emotionally.

1. What caused the other person to behave this way? Were they having a bad day? Did they make a mistake? Were they acting out of character?

2. Why did they do what they did? Were they simply thoughtless, or were they trying to hurt you?

3. Are they just a bad communicator? Are they simply unaware of how they’re coming across?

4. Are they deliberately trying to hurt you? If so, why does that matter?

5. Can you learn something from the situation? Is there a way to turn this negative experience into a positive one? Can you find a way to work with the other person in the future?

6. Is it even worth continuing the conversation? If you still feel hurt or angry after thinking about these questions, it might be best to move on.

It’s easy to get defensive when someone’s behavior triggers you. But responding angrily or defensively only escalates the situation. Instead, try looking at the other person’s perspective, and ask yourself what you can do to make things better.

Your hurt feelings can have an impact on other areas of your life, such as your work and relationships.

Acknowledge that other people are hurting, too. Everyone hurts from time to time, and it’s natural to feel empathy for others who are hurting.

You don’t have to feel responsible, but you might want to do what’s best for you and the person who hurt you.

2. Work through your feelings.

Remember, everyone hurts sometimes. Even the person you’re angry with.

Instead of focusing on the issues the other person brought to your attention, focus on your own feelings. What caused you to hurt so deeply? What were you thinking? What were you feeling? Did you snap? Take time now to reflect on and analyze your emotions with a rational mind.

Hurt feelings can linger, which can make you feel worse. Accept that things might be different. If the hurt feelings aren’t going away, it might be time to re-evaluate your friendship with the person.

Don’t dwell on the “what ifs.” Some people believe that if you can “think” or “wonder” about what would have happened different, you can somehow change the outcome.

However, this is often the case in our heads, not in real life. In the real world, we can’t change the past, we can only learn from it.

If you think about it logically, when someone hurts you, their intentions are rarely malicious. They may not mean to hurt you, and they may not even realize they hurt you. Sometimes, they may have been through a traumatic event, or they may be drunk or drugged and don’t realize what they’re doing.

5. Avoid blaming yourself or them

Realize that you can’t control another person’s feelings. We can’t force someone to like us, want to be with us, or even feel a certain way. We can only control our own behavior. Don’t blame the other person for your hurt feelings

Things get worse when two people argue about what happened. Avoid arguments by staying quiet, and by letting the other person know that you’re willing to listen.

If you feel like you’re being hurt too often, consider taking a break.

When someone hurts you, it’s natural to feel angry, angry, angry. However, if someone else’s hurtful behavior leaves you feeling vulnerable, betrayed, or unloved, it’s best to take a more conciliatory approach. In order to deal with pain take some alone time until you heal and bounce back as an emotionally strong person.

So, that even if in future someone tries to disrespect you or treats you badly. You will be mature enough not to take their ignorance personally to your gentle heart.

8. Don’t control or try to change the other person.

When another person hurts us, it’s normal to want revenge. But revenge only hurts us. Revenge won’t resolve the situation. It won’t bring the person back into our life.

Revenge is destructive. When we seek revenge, we give up our power to control the situation.

It will never bring us happiness. It’s OK to be mad. It’s OK to have negative feelings. But revenge only hurts us, and that doesn’t make us happy.

When you’re dealing with someone who isn’t being polite, patient or considerate, it can be tempting to become angry or defensive. But the best way to deal with someone who’s hurting you emotionally isn’t to react — it’s always best to try to see the situation from the other person’s perspective. And communicate your feelings with utmost honesty and resolve the conflict.

Forgiveness is empowering. When someone hurts us, we have two options. We can focus on the pain, the hurt, the anger, whatever emotion is strongest at that moment. Or we can focus on forgiving them for their foolishness and move away from them as soon as possible.

Unfortunately, when someone hurts you, it’s hard to know what to do. Sometimes the only choice you have is to set healthy boundaries. If, after trying all of these options, you still feel hurt or angry, the best thing to do is walk away.

That’s easier said than done, of course, because when someone hurts you, it can bring up all kinds of emotions–anger, sadness, fear. But spending time stewing will only make you feel worse later.