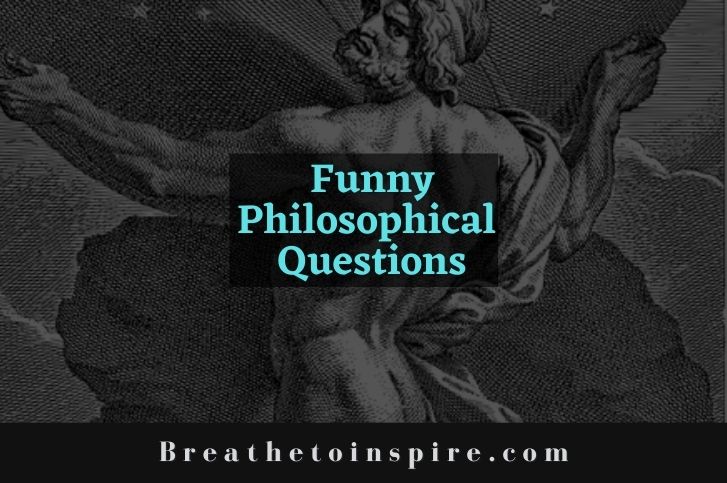 1. Why to live when it is eventually going to end?

2. Are you sure you want to exist?

There are several issues with this question. First, we need to know what does “exist” means? If we are clear about its existence.

Second, we need to analyze and ask, “Do we really exist?” What if we don’t exist at all? What if it is only thinking and thoughts are real and we never really existed to that matter?

Okay! Even if we consider we do exist and want to exist. But what if we don’t have any choice other than to exist?

3. If a fish were into existential philosophy, would it smoke from its mouth or its gills?

The real question is how does it light its cigarette? I’m sure, Socrates would really disappoint with this funny philosophical question.

But anyway. Considering the fish lighted its cigarette somehow. Now relate it to humans. As we humans smoke with the mouth, not with nostrils. The fish would smoke from its mouth and exhale through its gills. Do you have any second opinion?

4. What if you’re an immortal until proven otherwise? (prove to me I am an immortal)

You’re made of cells. Cells regenerate every day. So, if they are mortal. Therefore, you are too.

5. Does a trace of the true self exists in the false self?

“A lie that is a half-truth, is the darkest of all lies.” – Alfred Tennyson. That’s an ultimate confirmation bias. Hence, proved. Stay smart.

6. What do you worry about the most in life? (Funny philosophical answer)

2. Everything that is happening.

3. Everything that will happen and

4. Everything that has not happened.

7. How do you keep your opinion to yourself when the conversation at home turns pseudo-philosophical?

It’s not possible. Anyway, I used to enter the discussion. If I hold it, my staggering intellect would increase the of my cranium to an unhealthy extent.

However, I learned to shut my mouth a long time ago, regardless of any heated debate. What’s your journey though?

8. Why was philosopher camus’s hair so soft?

9. How can you discover something that doesn’t exist?

With the help of objective morality without claiming the existence of a higher being.

How do I know I’m not dreaming?

How do I know this isn’t a simulation?

Is this conversation going to fulfill my destiny?

Where do sleep paralysis demons come from?

Am I being authentic?

By the way, what goes through your head all day?

11. How do you prove your existence without proving it?