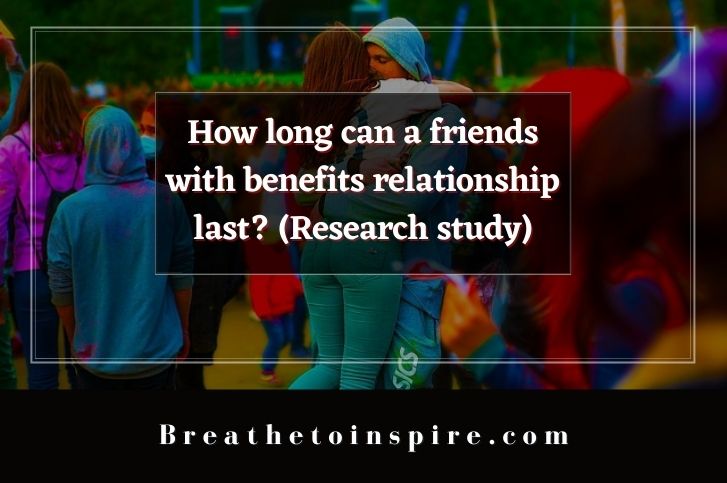 Friends with Benefits (FWB) is a type of romantic relationship that is casual, non-exclusive, and lacks emotional ties.

It’s similar to a friends-with-benefits situation where both parties are interested in each other but not as lovers or boyfriend/girlfriend.

This type of relationship doesn’t imply that you don’t have feelings for each other. Instead, it means that you only care about each other as potential physical relationship partners without any strings attached.

It doesn’t mean that both people will never fall in love; it just means that they won’t do so during their time together.

Either you plan to get into a FWBR or already part of it, It’s obvious to have many doubts and questions regarding how long can a friends with benefits relationship last and what precautions you should take to make it work?

So, Let’s get straight to the point:

How long can a friends with benefits relationship last?

They found that only 15% of people are able to change from being FWBs to being in real relationships.

About 70% of the participants were women, 74% white, and 72% heteros#xual. About half of them were 30 years old and under. Participants knew their benefits-eligible friends for about three years, on average, before the study.

Also read: 31 Questions to ask yourself before getting into a relationship

After two surveys within the gap of 2 years, it was discovered that 25% of people kept friendships with benefits, 15 percent were romantically interested in one another, 28% got rid of their benefits and kept being friends, and 31% cut all ties.

Interestingly, the study shows some relationships lasted longer than others. Most of the people who returned to just being friends were successful, with 60 percent saying they were just friends after the first encounter.

However, 40 percent of the couples still remained friends with benefits after going out a second time.

Another study published in the Canadian journal of human s#xuality regarding friends with benefits relationship among Canadian undergraduates of 146 men and 135 women; ages 18-40.

During the research, the participants described their experiences with “friends with benefits” relationships (FWBRs).

They discovered that 38% of them experienced positive friends with benefits relationships, 37% neutral FWBR experiences, yet 40% of the participants reported that they would not enter an FWBR again.

Women and men equally experienced emotional complications throughout the relationship, which predicted severe negative outcomes in 22% of cases.

A significantly greater proportion of men than women entered the relationship hoping for it to turn into a dating relationship and expressed a desire to avoid an FWBR in the future.

Based on the results, gender differences in FWBRs are nuanced and confirm and depart from traditional gender roles.

On average, only 14% of FWB relationships lasted past four months; 32% happened between four and six months; 24%, between six and eight months; 17%, between eight and ten months; 7%, for ten to twelve months; 6%, from twelve to twenty-four months.

This is surprising because most assume that once a friend has s#x with someone, they will no longer be able to be friends; however, this is disproved by research.

Friends with benefits is an ongoing thing rather than something fleeting, which many people view it as. It isn’t as easy to transition from FWB into a real relationship; however, there are ways to do so successfully.

The findings showed that s#xual exclusivity was less likely among women; compared to men, FWB relationships tended to occur between relatively older individuals (above 24), homos#xual or bis#xual men were unlikely partners for FWBs.

That said, emotional intimacy may lead more quickly towards commitment in same-s#x relations. Having feelings towards your partner can positively affect how you see them s#xually.

Relationships between FWBs may not last forever; however, sometimes their end is not a matter of time.

Also read: How to be friends with benefits relationship?

You and your “friend” might have a few weeks or months of friendship with benefits left – but what matters most is how comfortable you are and the chemistry between you are your FWB. If you start to feel something isn’t right, maybe it’s time to end the friendship.

So, in conclusion, how long can a friends with benefits relationship last? The answer is, Just like any other type of relationship, there’s no one perfect amount of time for a FWB situation.

Some are long-term and others are more casual or just physical in nature; it all depends on how comfortable you and your partner feel after both have been in similar situations before.

Friends with benefits relationships tend to be a lot more casual and less involved than other types of relationships. That means that they’re also more likely to fizzle out and end.

How long a FWB lasts is dependent on many different factors, including how much time you both put into it, your own expectations, and what kind of commitment either of you want out of it.

And in some cases, once one or both parties have started looking for something more (and are willing to compromise their standards), a friends-with-benefits relationship may not last at all.