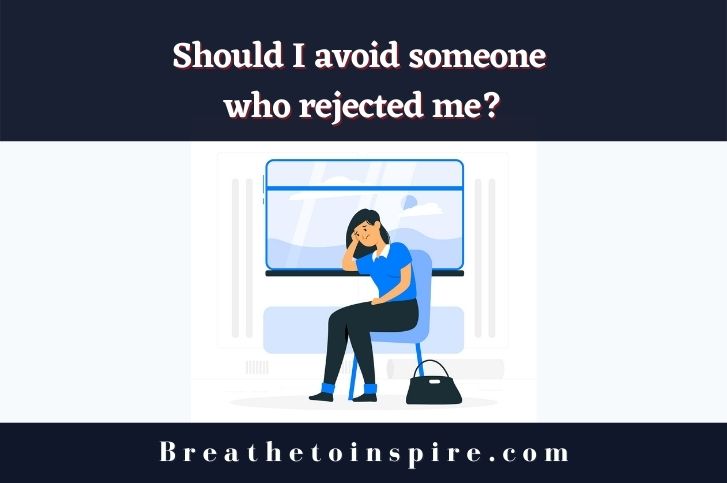 If you’ve been rejected by someone you love, your thoughts might be running something like this: I’ll never find a significant other. Everyone around me thinks I’m terrible and will never speak to me again. You might be feeling some pain over it.

Rejection can affect your self-esteem, or it can make you feel that nobody cares about you. It’s normal to feel this way, but you shouldn’t let rejection define your life or keep you from doing what makes you happy in the long run.

Although some people do feel that way after being rejected, others don’t give it any more thought than that they were rejected in that one instance and move on to the next opportunity that comes along their way without an ounce of hesitation or fear of getting rejected again.

Should you avoid someone who rejected you? Or should you try to win them back? It’s an interesting question, and one that doesn’t have an easy answer.

Recommended reading: How to say goodbye to someone you love but doesn’t love you back?

There are plenty of compelling reasons to avoid someone who rejected you, but there are also good reasons to stick around. This article will help you think through whether or not you should avoid someone who has hurt your feelings before and might hurt them again in the future.

Should I be friends with someone who rejected me?

No. This is not to say that you can’t try to still befriend them, but if they turned you down it likely means you aren’t right for each other in some way.

Friendship is based on more than just your suitability for each other; it also requires mutual compatibility. A person that rejects another isn’t always right for friendship either. If you’re interested in maintaining a relationship with them, go ahead and ask why they did what they did (maybe there was something they didn’t like about you).

But don’t blame yourself; no one is totally perfect. You were simply wrong for them at that time of their life. You’ll get a lot of conflicting answers to that question, but my best advice is that you should do what makes you feel good.

Being social and making friends can help boost your mood and build important skills like patience, listening and empathy. Plus, it’s hard to move on from an ex if you’re still in touch.

On the other hand, sometimes it feels good to know where you stand with people—both romantically and otherwise—so sometimes it might be worth giving some distance so you can both recover on your own terms.

Should I avoid someone who rejected me?

Should I Avoid Someone Who Rejected me? This is a difficult question to answer, since most people are aware of how traumatic it can be to deal with rejection. However, there are many things to consider before you make any decision.

Rejection can hurt, no matter what form it takes. It can be brutal to get rejected by someone you love. There are many reasons that people reject others, some of which are more legitimate than others, but the result of rejection is always the same—it hurts.

It’s always hard to be rejected by someone you’re interested in, whether it’s romantic or not. They rejected you because they didn’t share the same feelings as you, but should you avoid them after the fact? To answer this question, If you’ve been on the receiving end of a rejection, you know how it can stick with you and affect your personal life.

If you’re thinking about avoiding or ignoring someone who rejected you, this advice may help you rethink that strategy. For one thing, it could be considered rude by some people, while others may perceive it as an opportunity to get closure and put your relationship in perspective once and for all.

You may still think about that person, especially if you’re trying to get over them. It may be difficult to move on without seeing how they’re doing. Perhaps you need closure, or maybe it’s just hard to face up to the fact that your feelings for them were unrequited.

Whatever your reason for wondering whether you should see them after they reject you, there are many factors at play when it comes to deciding whether or not it’s a good idea in any given situation.

Also read: Can you stop loving someone you truly loved?

You can gain some insight into how other people feel about avoiding exes by considering their circumstances and examining how they handled rejection before making up their minds.

If you’re on the receiving end of a rejection, don’t immediately assume that your self-esteem will be permanently damaged. Even though it feels like they took something from you at that moment, they didn’t really take anything away.

You still have everything that makes you special and unique. It might feel like your life is over after being rejected, but by giving yourself time to recover and process what happened, you can make peace with it sooner rather than later.

Avoiding someone who rejected you won’t make their reasons any less true or valid; there are still reasons why they might not want to be with you. The first thing to realize is that being rude, avoiding or ignoring your ex after you break up or are rejected can hurt you more than it hurts them.

If you find yourself on either side of rejection, it’s important to keep things in perspective. One of the worst things you can do is take rejection personally. It means that person didn’t want to get to know you better, but it doesn’t mean there’s anything wrong with you as a person.

Many people go through multiple rejections throughout their lives and still manage to be happy and successful in all sorts of relationships—romantic and otherwise.

What matters most is how you deal with your own rejection and how much work you put into improving yourself when needed. By rejecting others when they don’t deserve it, we aren’t doing ourselves any favors either—and we’re likely hurting our self-esteem in the process.

It might also hold back your personal growth and future relationships; generally speaking, people don’t like to get over their pasts until they resolve all loose ends with those who hurt them in the past.

Whether you’re trying to figure out if you should make amends or eliminate a person from your life, there are a few factors that can help you decide what’s best.

The most important thing is how much of an impact did their rejection have on your life and how it affected your self-esteem? If they did something that was unforgivable, then it may be a good idea to have no contact with them.

But if they were just being honest about their feelings toward you, giving up on them altogether isn’t necessary. In some cases, avoiding someone who rejected you may be difficult because of shared friends or family members.

In these cases, it might be easier to get along by remaining cordial and avoiding more sensitive subjects while talking with them.

Even if you believe that they made a bad decision, try to keep it in perspective. When you feel like avoiding or ignoring someone, remind yourself of how hard it is to be on either side of rejection. While rejection is tough for everyone involved, if possible, make an effort to separate your emotions from their actions and understand where they were coming from.

It may also help to put yourself in their shoes and imagine how you’d react if someone broke up with you or ignored you after being rejected by them. This can give you insight into why they acted that way towards you after being hurt by them first.

Ignoring a person who has rejected you, whether they’re a friend or significant other, can have negative consequences in your life. It may feel good in the moment to brush them off when they turn down your request for a date or ignore your phone call, but that momentary satisfaction will be fleeting.

Ignoring a person won’t improve their opinion of you and it won’t stop them from rejecting you again next time. If you want to keep improving yourself and having positive relationships with people in your life, take steps to mend fences with anyone whose relationship is important to you.

In fact, accepting rejection from others can actually make you stronger and more confident in future romantic relationships.

Second, you might not get over your feelings of rejection by avoiding that person. Sometimes, people get hurt because they withdraw and isolate themselves after a breakup or end to a relationship.

Also read: How long does it take to get over someone you love?

Being around an ex is likely to only stir up your feelings again, which could lead to another awkward situation or more hurt feelings. On top of that, some people use avoidance as a defense mechanism when it comes to dealing with rejection. It’s certainly easier to ignore an ex than it is to face them head-on.

But not facing rejection head-on means you’re also avoiding taking steps toward healing and moving on from it; meanwhile, you’re stuck in limbo wondering what could have been and beating yourself up for being rejected in the first place.

Rejection is a difficult thing to deal with, but it can be more destructive if you let it consume you. It’s okay to take some time for yourself and think about how you feel, but remember that you have more going for you than your romantic life. Focus on things that make you happy and surround yourself with people who care about your well-being.

Reach out to friends or family if they can help you through a rough time. If needed, seek out counseling services from a professional therapist who has experience helping people recover from rejection and move on with their lives.

How to say goodbye to someone you don’t want to leave?

Should I avoid someone who rejected me?
0 shares