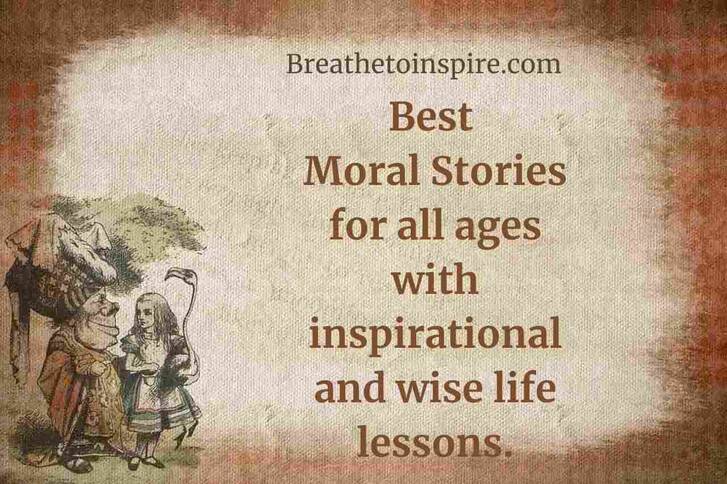 Importance of Stories With Moral.

I have never heard or come across any man who mastered life in his most loving moments. Everyone will be happy and inspiring when everything goes as per their will.

However, only a few know how to stand for themselves and be prepared to fight for their loved ones when there is no single hope left to dream of a bright future.

Perhaps, unlike many, these very rare men or women discovered the secrecy of life, It’s because they have either experienced severe tragedies in their personal lives or possessed an extreme level of empathy towards the world they are living in.

It’s a great gift to feel the pain of their own life and a worse nightmare to carry the burdens of others by possessing such sensitive hearts.

Nonetheless, these people see the things, feel the depths and showcase the beauties of life, that others might barely notice or not ever realizes for their entire life.

I wrote another story related to moral stories for kids: A wolf and the black sheep.

Having said that, No Matter how old we are, in front of our unsure future, we always tend to be lost and confused by our own thoughts when time hits us hard.

But, the best part of being human. We share common ground, we help each other. The one who is good at understanding one subject helps the other to clear his mind, and heart and purify his soul.

Thus, for ages, writers are great and gifted artists who see the life through deepest lenses.

Make us realize our weaknesses and faults in each other and always try to bring an impact and make a difference through their wisdom of life, especially through Stories with morals.

Always remind us, that we all learn life lessons a hard way and that’s how we grow together when we inspire each other and support one another during the darkest hours.

I have written moral short stories which are applicable to kids, adults, and all age groups. These life lessons are must suggest to practice, especially for children. So that they inculcate morals and ethics of being human and doing service to others.

Continue reading all the short stories with morals until the end. Hope you will learn some inspiring and motivational moral life lessons that truly make you good, and wise and change your perspectives for the better towards the world.

“The Greatest Wealth” – A short story with moral lesson

Back in the day there lived three childhood friends – who embraced their individual possessions and had memorable instances by sharing happiness with one another during good and hard times.

Everyone in the village who witnessed their friendship was surprised by their wit, charisma, and caring nature. However, such togetherness didn’t last long and was long ago when they were not consumed by life’s trials.

Each of them has higher aspirations and bigger plans to be fulfilled. As they reached adulthood, at the right age, each married their respective chosen women and had children of their own, and learned to lead a decent lifestyle.

Not to mention, with family there comes great responsibility. Along with it, there also come unshareable internal conflicts.

Soon weather began to change in their private lives since the burdens of their hearts were controlled by the uncertainties of fate. The strength of the relationship between these 3 friends was not the same as it was.

As time made them very busy, they avoided all the external influences only with the aim not to worsen the status of their adversity which they were unfortunately already in.

They decided not to open and express their minds and hearts, neither to a stranger nor to their beloved friends. As years passed by, the distance between their bonds stretched so far and faded away into the morning mist.

It’s been a long journey, almost 10 years they missed each other’s presence.

One day after working very hard for hours, one of the three friends named “Solomon” In fact, all his life he put incredible efforts and made many sacrifices yet he didn’t reach where he wanted to be.

Weary and tired of the difficulties he seated himself next to his loving wife. He questioned his existence and said,

“Oh, dear God, my problems are more miserable than any other human. I pray no one ever should be bestowed to poverty as such of my very status.”

Later, the next day he was reminded of his other two friends and what they are up to. He was ashamed of seeking any financial help. However, he wanted to go and rekindle their broken bonds.

After much thought, he packed his luggage, gathered his little earnings, and started his journey on foot to meet his longing friend.

Soon after he reached his home, he was saddened by what he had to witness. He thought no point in seeking any help. And continued his journey to the other friend,

The moment he saw what his other friend was going through, he was devastated. He didn’t even dare to ask or talk to him and returned to his home and realized how grateful he was for having a loving family.

That very moment he realized that the greatest wealth was having a good state of mind and good health in the body. And moreover, he realized he was blessed with a loving family and understood how peaceful his life was when compared to the other two.

Afterthought, further, he talked to himself, “It will be unholy or inhuman if I didn’t take a stand for my notable companionship.” Therefore, whatever savings were left in his home, he gathered and has taken his wife along with him, after reaching there, he asked,

“Steve, what’s happening to you, my friend? What is the cause of your mental illness?”

Moral of the story is: All the memories in the mind don’t store moments but are occupied by the people who touched their hearts and raised their souls from dust and remind their gifts. Without them, we are not who we are today. Appreciate all the people in your life.

If you learn to realize every aspect of the past, future, and the very moment of your breath, all the questions in your head find a new meaning raise you higher than heaven, and keep you down to earth.

Such balance is only for people when we practice the morals  After all, “love is the reason we move forward.”