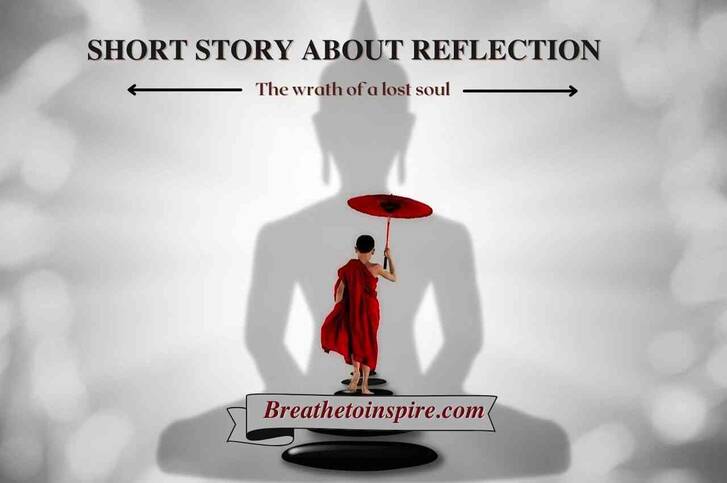 Moral Short story about reflection and self discovery: “The Wrath of a lost soul.”

It’s been a year, a man from the East who belongs to the Arab world was named “Abdullah” appeared to be missed from his home; his village; his native country; and mainly from the lives of his beloved wife, children, and relatives.

In deep love for him, all the dearly people in the village who truly admired him for his honesty, could not bear his sudden absence.

So, they searched to find him near the hills where he used to spend his lonely times – In the woods where he once used to pass his peaceful moments to feed the wild and gentle beasts.

And also looked nearby river where he sings songs to the flowing water and the birds who listen to his mystic musings.

They searched during the darkest hours of the terrible nights and the brightest times of brilliant days. Everyone searched everywhere they thought he could possibly be found. Yet, they could not trace a single mark of the message. And finally, they gave up once and all.

Read related philosophical story about self:  Best short stories with moral lessons for everyone.

However, they were unaware of the fact that neither had he missed from the home nor his country, but he missed from himself and lost in the unanswerable questions of his existence.

At a young age due to the tragic death of his beloved parents, he felt betrayed by them – for leaving him all alone too soon in this strange world, without really experiencing the true love which he deserved from them.

Thus, as he grew into an orphan, unreasonable wrath too grew in him for himself and for the life around him due to his difficult childhood.

Though he carried a burden in his soul, with a thoughtful, thought he decided to marry a woman so that she would fill the void in him.

As soon as he decided, fortunately, he came across a woman who was equal to his personality. They married each other and had children.

The sweet moments didn’t last long. He began to feel the same emotions that he experienced when he was a bachelor.

With so many unfulfilled desires Abdullah was not satisfied with what he had in his life, it’s clear that he was still stuck in the past and didn’t know how to let go of it.

One day without thinking of his family for twice, and not even informing anyone he left home.

By the motive to travel the world in the hope to find himself again from the people he encountered, from the stories they share on self-realization, and the experiences he gathered. He firmly affirmed and wished to change himself and find his true self.

Previously he heard legendary stories about self-discovery techniques of the Asian philosophy and the healing power of their occult magic and ancient tantrums.

Also, it was believed that just with their mystical vocals even all the evil forces would treat from the presence of their holy lands.

Thereupon he made himself ready for the long voyage to the unknown lands in the aim of self-awareness.

You may love to read another post related to the short story on self realization: Who Am I? A brief researched article on self-discovery.

He declared to travel to China, as he thought, he reached a secluded region named Qinghai Lake of that country.

After some dedicated research he was fortunate to discover a revered Zen master who was known for his impressing skills in martial arts.

From many parts of the world, people travel to visit a man who is well known for his wisdom.  He barely opens his mouth and chooses not to utter a word unless the situation demands it.

“How to find myself Master?” He asked

“Meet me tomorrow at the bank of lake by leaving everything that you have brought with yourself.” Master replied.

Next day as he requested, Abdullah came with empty hands and eagerly waiting for the master’s arrival.

Within no time, the Zen master arrived and said, “I told you to leave everything that you have carried with you here. Today is not your day, come to me next day”

As the master ordered, he returned to his room and lost in deep thoughts by impatiently waiting for the next day.

The sun rose on the following day, after being freshened up Abdullah arrived completely naked without any clothes on his body as exactly the master asked him to.

By the time the master has come to the lake, Abdullah stood still with shame on his face. The discomfort can be easily witnessed from the eyes of the master.

“You are delaying your precious time Abdullah” Master continued, “I asked you to approach me empty not naked. Your schedule is postponed to the next day. You may take your leave now.”

Abdullah couldn’t understand what was actually happening there, being entirely shy in his face, he rushed to his room and shamed himself for such an insult by the master.

After continues reasoning with himself and his thoughts afterthoughts, he couldn’t wait for the next day and decided to approach the master on the same day.

He went and asked, “Master! What do you mean when you say, ‘leave everything’?”

“Great question! Come with me”

He took Abdullah into the middle of the flowing lake and says,

“You have only five chances. I ask you five questions, if you do not answer what I expect from you, I cannot be your master. You may answer as quickly as you can, or you can take your whole life to respond.”

Abdullah didn’t say anything and thought, “It’s not fair.” But he knows there is no other wise man in the country.

He did not want to lose such a legendary master and thought to himself, “If the master says something very forwardly, there might be some major purpose behind his words.”

As he talked to himself and continued, “Okay, master I try my best to meet your thoughts. What’s the first question?”

“What do you see?” Master asked, “Be careful before you utter a word. Remember you have only 5 lifelines, if you do not pass the test you are dead to me.”

“Master what do you mean by your question, I am not clear with your intention. Ask me specifically.”

“You lost your first lifeline” Zen Master responded, “You are not listening to me, Just now I warned you to be careful before you utter a word. Pay attention and focus – ‘What do you see?’”

The disappointed, discouraged and detached Abdullah lost his temper and said, “I see you in me.”

“That’s a well put answer. The choice of your words are near to intelligence.” Master Continued,

“Though you are so closer to the reality but far away from the perfection. You lost your second chance  Abdullah.”

Abdullah is high on his mind and wished to run away from this country too, for a moment. But as he himself chose this master, he has no other way than accepting his fate to lead him.

By seeing the wrath in his eyes, the Master said, “Remember, you have your entire life to answer the question.”

Abdullah began to pay attention and focused on what is what it is.

Now he knows if he opens his mouth he loses his third chance. He chose not to utter a word and moves to his chamber.

The following day he arrives at the same spot with fresh thoughts and answers “I see myself in the reflection of water and that is ‘everything’.”

“With your yesterday’s behavior I thought you would come to me with the answer today.”

Master said, “Have you forgotten my first request? I asked you to leave everything that you have carried with yourself here. How Ignorant are you Abdullah? I feel regretted to announce that you lost your third chance.”

After hearing those words, Abdullah didn’t return for Ten days and on the Eleventh day he arrived and uttered “Nothing.”

“You have lost your fourth lifeline. You are one step away from the death. However, I was impressed by your answers, I need to mention – with your each presence, you are coming closer than ever.

Finally, for once and one last time can I suggest you something Abdullah? Master continued “Your impatience may kill you”

Abdullah returned to the room and observed everything he could, with detailed focus surroundings, he searched for every clue that he thinks would be benefitted for his answer.

He moved in and out of the room, and flipped the books for days and months on end. Gathered information, sharpened his mind, fed his soul, and from the information that has been gathered, he mastered the skills of martial arts by himself.

Time flew, he contented himself with unlearning and freed himself from everything. Now he knows what he carries and what has to be let go of.

After three years of vigorous self-learning, Abdullah goes to the master and salutes with his gestures on a fine morning. Now, the master says, “Go on.”

Abdullah neither reacted nor responded to the master, but stood in stillness without thinking, without feeling, and without anything. The Whole day he stood in the middle of the lake.

The day finished, and night has begun. Months ended, and years flew. Both stood still.

After 5 years of ‘Silence’ the master says to Abdullah, “Now you are ready for the actual training.” He continued. “Be prepared for yourself. Zen.” And suddenly he disappears by leaving his body in the lake and handing over his soul to the ‘Zen.’

A Short story about reflection

12 shares
This page may uses affiliate links. When you click an affiliate link, we get a small compensation at no cost to you. See Our affiliate policy for more info.