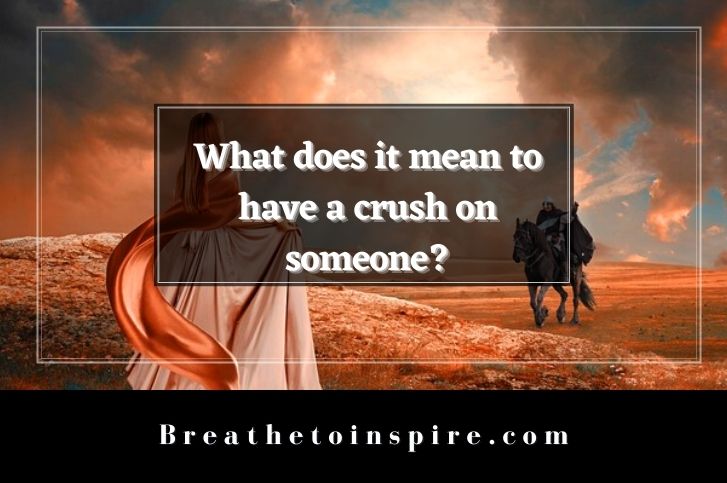 You see someone you think is attractive. You immediately start to feel intimidated, yet intrigued. It is almost as if you are looking at them through a pair of binoculars, studying their every move.

If you ever found your mind drifting off to the person you were attracted to, and then suddenly felt embarrassed at the thought of getting caught thinking or talking about them. What does this situation really mean? This is what it means to have a crush on someone.

What does it mean to have a crush on someone?

So, what is a crush? I think the best definition of the word crush is: the person you can’t stop thinking about. It’s that strong infatuation you feel for someone. You have a crush on them.

That feeling of butterflies in your stomach when you’re around them, that overwhelming urge to be near them, even if it means making a fool of yourself.

Also read: 25 Psychological facts about crushes and falling in love

As per psychology, A crush is a psychological phenomenon that occurs when an individual becomes infatuated with another person, a classmate, or friend that you really like. or someone you just met recently.

Crushes are a natural part of life and are usually harmless. However, if crushes start to affect your day-to-day life or your mental health, then it’s time to ask for professional help.

What does it mean to have a crush on someone?

To have a crush on someone means that you’re attracted to them, or you’re interested in them romantically. You may want to start a relationship with them, but haven’t done so yet.

It’s important not to confuse crushes with love. A crush is a strong feeling of infatuation that you have for someone else. It’s normal to have a crush and to start to feel some attraction and attraction for people other than your partner or spouse as we get older.

When we are young, it can sometimes be confusing to distinguish between love and lust, but as we mature, we learn how to identify what each feels like and recognize them as separate feelings.

When you have a crush on someone, you feel like you really like them, and it’s hard for you to control how you think and feel about them. You might feel uncomfortable around the person, or nervous.

Crushes are a strange thing that happen to all of us at one point or another. They can be intense, they can be confusing, and they can be downright painful.

Crushes are pretty universal in the human experience, but it’s always nice to know that you’re not alone.

When people have crushes on each other, the line between friends and lovers often gets blurry. There are those who cross that line intentionally and those who do so accidentally. The thing is, crushes will fade. Sometimes it happens quickly and sometimes, it takes years.

Crushes are not meant to last forever. They come and go as we get to know someone better or decide we don’t like them anymore.

If your crush has lasted more than four months, then there’s a good chance it’s not just infatuation; try taking some steps to deepen your relationship with this person for real.

How long does a crush last?

According to results from two Stanford University studies about love, crushes can last for a long time — even a lifetime. The first study asked 926 adults and found that people tend to have crushes on average for 18 months. The second one asked 1,032 adults and found that half of them had experienced a crush lasting longer than four months.

The term “crush” is usually used in a casual context, but the feelings can be intense. What is it about someone that makes you feel so attracted to them? A crush can cause people to act in ways they might not normally, and it can affect how they feel about themselves.

In the Stanford studies, both men and women were attracted to people of the opposite sex who were intelligent, funny and good-looking. Intelligence was rated higher than physical attractiveness among both sexes. Having a good sense of humor also ranked highly for men, but not as much for women.

Why do we have crushes?

Psychologically speaking, crushes are based on idealization. You see something in that person that makes you feel good, so you project all sorts of wonderful qualities onto them.

The image of the crush becomes more important than the reality; the reality is often ignored or distorted. In some cases, the person with the crush may actually be projecting an idealized version of themselves onto the other person.

You can also get “addicted” to having a crush on someone in much the same way as someone who is addicted to drugs or alcohol.

Someone with a crush may feel constant excitement and anticipation, followed by disappointment and depression when their hopes are dashed once again. If they reach out to the object of their affection and get rejected, they might even feel a sense of shame or humiliation.

Someone who has been crushing on someone for a long time may start to feel anger at being continually disappointed, which can lead to resentment if left unchecked.

What happens in our brains when we have a crush on someone?

Studies have shown that people with a crush experience emotions similar to those who are in love or suffering from a mild obsession.

When you fall in love with someone, your brain releases certain chemicals like adrenaline, dopamine and norepinephrine.

Your heart rate increases as well when you’re around your crush or think about them.

When we experience feelings for someone, it is because our brains react to various chemicals which build up during the attraction.

The initial feelings of attraction stems from the brain also releasing a chemical called phenylethylamine or PEA. This chemical is found in chocolate and is one of the reasons why humans crave this particular food.

The same chemical is released in our brain when we fall in love with someone. When this happens, we feel exhilarated, euphoric, giddy and excited by the presence of the person we are attracted to.

In this stage of attraction, we do not know much about one another but we wish to learn everything there is to know about each other.

This can be experienced when a man is interested in a woman and he will always want to know more about her interests and hobbies because he just wants to understand more about her.

After this initial rush of attraction, if the two people continue to engage with each other both physically and emotionally, their brains will release oxytocin which is known as the bonding chemical that helps us feel attached to our partners.

This chemical also allows us to feel a sense of calmness and contentment around our partner even during times of stress. Another hormone that gets released during these intimate moments is vasopress.

What should you do about your feelings when you have a crush on someone?

If you have a crush on someone, it’s perfectly normal to wonder if they like you back… or even notice you.

While there’s no way of knowing for sure without asking them directly, there are some signs and signals you can watch out for that may indicate that they’re interested in being more than just friends with you.

However, it’s important to remember that many of these signals can be ambiguous and easily misinterpreted, so keep that in mind when trying to get a read on how your crush feels about you.

For starters, be happy that you are feeling this way. Sometimes the feelings take over and we do not realize how good it feels to have a crush on someone! The first thing to do is to figure out whether or not it’s worth pursuing. If the person you like is single and available (and single) then it’s definitely worth taking the next step.

But if he/she is already attached or not interested in dating, then you might want to think twice before getting involved in an emotional mess that will only leave you heartbroken and miserable.

It often gives you a pleasantly anxious, butterflies-in-your-stomach feeling and can make you feel giddy, excited and even naughty.

Infatuation is not in itself a bad thing — it’s normal. But if left unchecked, it can easily become unhealthy.

You begin to obsess over the object of your affection; you start daydreaming about him or her constantly and find yourself unable to focus on anything else. You often don’t think clearly and might make impulsive decisions that you’ll later regret.

Having a crush is like falling in love with someone, but then again it isn’t because you don’t have the same emotions towards them as you would if you fell in love with that person.

Having a crush doesn’t mean you want to date them, it just means that you are attracted to them and think they are cute/hot.

Having crushes is fun! It’s exciting to think about someone you really like and fantasize what it would be like to date them. You look forward to seeing them every day and you feel happy when they’re around.

Crushes give you something to look forward to, whether it’s talking to him or her in class or texting each other all weekend long.

It’s also normal to have lots of different crushes over time, especially if you’re young.

Most people have at least one serious crush during high school or college, but plenty of people have crushes on multiple people at once or even change crushes frequently (I’ve heard some girls say they “change”