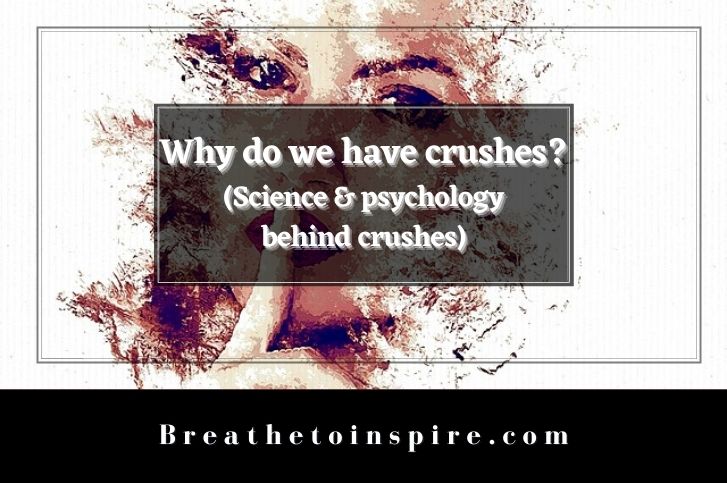 Most people will experience a crush at some point in their lives. Some crushes are so intense that people feel like they’re in love with the other person.

This can be made worse if your crush doesn’t return your feelings or notice that you’re there at all.

When you have a crush on someone it’s natural to want them to feel the same way about you. Sometimes this happens, but unfortunately, it doesn’t always work out that way.

Crushes can also be one-sided, where one person feels something and the other does not.

Also read: What does it mean to have a crush on someone?

This can cause a lot of pain, particularly if the unrequited feelings are strong enough that they cannot be ignored.

This article will explain Why do we have crushes? What is the psychology behind this natural phenomenon? Why humans can develop deep feelings of attraction toward another person.

It will also explore how a crush may lead to changes in our personality and behavior.

Why do we have crushes?

Crushes come in many forms. They can be an innocent childhood phase that kids grow out of, or they can be a symptom of a deeper emotional problem.

Either way, having a crush is one of the most common things that happen to us in our childhood. It happens to people of all age groups, but it is more common in children and teenagers.

While some crushes may seem harmless, others can develop into unhealthy obsessions or even dangerous situations.”

The psychology behind a crush: Why do people have crushes?

Scientists have found out that crushes are actually the result of several chemical reactions in your brain.

The science and psychology behind why do we have crushes is: Your brain activates its cognitive network, the region that stores past experiences, preferences, and self-image when you see a potential mate, whether they are strangers, acquaintances, or partners. As this area activates, it “instructs our eyes on who to love.”

Also, the brain releases the “pleasure hormone” dopamine when you begin liking someone.

It also releases Oxytocin, a hormone that helps you bond with someone on a deep emotional level. These hormones control your feelings and emotions at times when you are in love with someone.

Most crushes start from early adolescence and continue throughout our teenage years. As we grow older, we get over them gradually and move onto mature relationships like friendship and marriage.

However, some people may never get over their childhood crushes even after entering their adulthood

When do first crushes happen?

At what age does a crush happen? Generally, first crushes occur around 10-13 years of age but can happen at any age.

They play a vital role in developing normal, healthy romantic relationships, and allow you to learn how to compromise and communicate more effectively.

What triggers a crush?

Crushes are largely driven by fantasy and projection. When we have a crush on someone, our emotions can be intense and irrational as we project our hopes and dreams onto another person.

What makes you develop crush feelings on someone?

Crush is an interesting phenomenon, psychologists have done a lot of research on it.

People usually develop a crush on people whom they meet or interact with frequently and come to know about their positive qualities.

The personal traits and qualities which attract them can be physical beauty, kindness, sense of humor, intelligence, confidence etc.

One common thing in all those who like a particular person is that all of them like some specific quality of that person.

Personality traits are the most important reason for developing attraction toward someone. When we like someone, we try to learn more about him/her and this is our brain’s attempt to predict whether the person will be a good partner or not.

Physical beauty has its own role in developing a crush but it’s not as important as personality traits.

In fact, in many cases, you may not find someone attractive at first sight but then when you come to know his/her personality traits, your opinion may change and you might start liking him/her.

It’s just that people are more concerned about looks than personality because it matters in the first impression and also because people think good-looking people will get lots of other good opportunities in life whereas average looking.

Reasons why you develop a crush on someone

Crushes can occur for a variety of reasons, and the results can vary as well. Some people might develop a crush on someone because they feel the need to be validated by that person.

This infatuation could also happen for various reasons, such as being attracted by the beauty of this person, listening to some rumors about him/her, having some common interests with him/her, or just being impressed by his/her words and deeds.

Others might develop a crush because they’re enamored by the other person’s physical appearance or personality traits.

When we have a crush on someone, it’s typically because they display the qualities we’re looking for in a romantic partner.

We also tend to project our hopes and wishes onto the other person, which can lead to feelings of disappointment when they don’t live up to our expectations.

Regardless of the reason, crushes often leave individuals feeling like they’re in a trance-like state.

They might develop physical symptoms such as sweats, rapid heartbeat, and increased blood pressure while they’re talking to or thinking about their crush.

They also tend to obsess over their crush, which can lead to difficulty sleeping, eating, and focusing on work or other tasks at hand.

Crushes are usually temporary feelings that occur when an individual is unable to move forward from his or her attraction to another person. These feelings can eventually pass in time if left alone to subside naturally.

However, some individuals may choose to act on their crushes and pursue their love interests regardless of whether they have been rejected before.

It is important to note that a crush is, not love. It may feel like love, but it is more of an infatuation with the person’s appearance, mannerisms, or other superficial characteristics.

A crush usually develops when a person has certain feelings for someone who he or she likes.

Can Crushes be mutual?

Often crushes aren’t always reciprocated. But it’s very rare that they can be mutual.

In fact, many times crushes are one-sided: either the other person isn’t aware of your feelings or doesn’t return those feelings.

It’s also possible for a person who doesn’t have any interest in romantic relationships (such as because they’re already in a relationship) to get butterflies from seeing someone else that makes their heart flutter.

This can happen even if you don’t want it to! Sometimes we just don’t have control over whether we like someone or not.

Crushes are important because they allow us to get insight into our own attitudes toward love and romance.

However, being too attached to the idea of having a crush on someone can prevent us from seeing them for who they really are and make it harder for us to open ourselves up to love.

When you have a crush on someone, you can’t stop thinking about them. You’re probably crushing on someone without even realizing it.

How do crushes influence our personality and behavior?

Crushes can influence our personality in many ways. When we fall for someone, we feel more energetic and active.

We feel more excited about spending time with the person we love. Sometimes our crushes can even change the way we dress or behave.

So basically, when we have a crush on someone, we tend to behave in a very different way around them compared to other people. Here are some examples:

You start behaving very cool and calm around them, instead of your usual hyper self. This happens because you feel like you need to impress them by showing your “cool” side and not your “hyper” side (because you think that will make them like you more).

You might even try to show off in front of them by doing things like impressing them with your singing skills or trying to act all smart or something just to get their attention because maybe that’s what your crush likes in someone.

You have butterflies whenever you see them or hear their name, and you get nervous when talking to them. Crushing on someone is a natural phenomenon that happens to everyone at some point, whether it’s being 13 or 30 years old.

Though there are many reasons why do we have crushes on some people, having a crush on someone is a natural phenomenon that most of us experience.

I don’t think there is any age limit to it, but I also feel that the intensity of crush changes as we grow up and have more experiences in our life.

It all begins with a perception that someone is attractive and you would like to know them better.

The interaction maybe only for a certain period of time but the person unknowingly starts becoming an important part of your life. You share your feelings with them, you expect validation from them.

However, make sure that whatever the attachment may be toward your crush, don’t make it unhealthy.