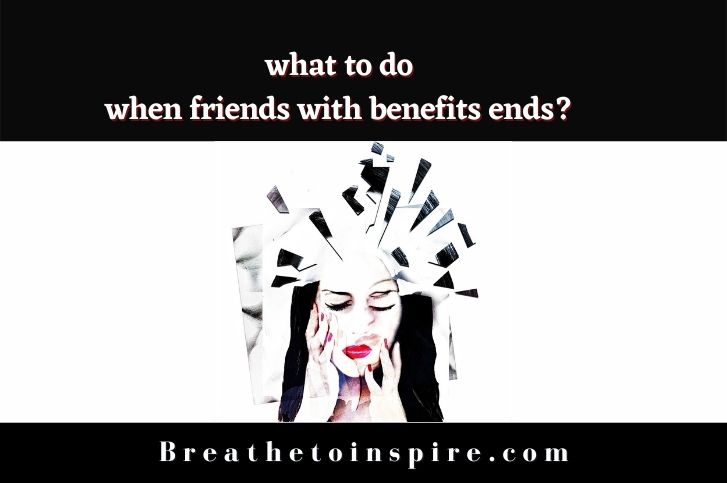 What to do when friends with benefits ends?

Friends with benefits situations usually don’t end on a bad note. Most people involved understand that it’s impossible for FWBs to become anything more than a physical fling, so in most cases things just naturally come to an end when one or both partners decide that it’s time for something else.

However, if you find yourself ending a FWB situation because your partner is falling in love and doesn’t want anything from you but s#x – then, by all means, do not settle.

Just because someone wants more from their FWB doesn’t mean that they’re entitled to chase you or guilt trip you into giving them whatever they desire – if you value your personal happiness above everything else then please stand up for yourself.

Also read: 20+ Signs your FWB is over

Being constantly pressured like that isn’t going to make you happy at all, so either try talking things through together (if possible) or simply pack your bags and get out of there.

If there’s one thing I’m sure of though, is that many have been in a fwb situation at some point in their lives – meaning that it will be much easier for someone who was previously interested to figure out whether or not they might still have feelings down the road if/when another opportunity presents itself (if only we could predict such outcomes!).

There are a few things you can do when an FWB situation comes to an end. If you’re feeling sad and looking for someone to commiserate with, I’d suggest going ahead and finding yourself a boyfriend/girlfriend – someone whose heart belongs completely to you and only you (in other words: no one that’s been involved in FWBs or polyamorous relationships).

Also read: Can Friends with benefits turn into a relationship?

Alternatively, if talking about it won’t help but would just make things worse, then go ahead and distract yourself! Do something fun that makes you happy. Remember how good it feels to be in love (the real thing), right?

Even if nothing happens between now and your next serious relationship, at least there’ll always be something bright on your horizon. After all, who doesn’t want to look forward to better days?! As always – stay strong and keep smiling.

What to do when friends with benefits ends?

9 Things to do when friends with benefits ends

Even if you want to stay and try and work things out, don’t. The only way you’ll really know what is going on in their head is if you step back for a while (at least a month) and allow them time to think about what they want without being distracted by your company every time they see you or talk to you on chat/social media.

This doesn’t mean never contacting them again, it just means putting some distance between both of you for a bit so that there isn’t any confusion about whether or not both of you have other intentions towards each other from here on out – trust me when I say it’s a smart move even if it feels like losing all your common ground at first.

Even if you’re still in love, it’s very possible that he/she doesn’t feel quite as strongly about you as you do about them.

Unfortunately, it may take some time and self-reflection on both of your parts before anything really changes; but at least now that they’ve had some time alone they’ll be able to think more clearly and hopefully decide what their next move is going to be, too (if they want another chance).

You might even find out from them (if you haven’t already) that all of your previous assumptions were completely off-base.

No matter what happened, your friendship was a wonderful part of your life for a time and it deserves more than just being pushed aside because someone fell in love with you and didn’t want anything but s#x anymore.

If you feel comfortable doing so, keep in touch on social media; even if they never come back around that doesn’t mean you can’t still support each other’s interests or check up on them every now and then as long as things don’t get awkward or uncomfortable.

They were once a very big part of your life and will always be special, no matter how things end up between you two going forward.

Again, no matter what you do or don’t do at any point during your friendship with them going forward, they need time and space to figure out what they really want out of life before they come back around (if they ever decide that you are worth pursuing).

If they never do come back around then it’s a blessing in disguise; you dodged a bullet by getting rid of that toxic person sooner rather than later.

Not only will it make you feel better about yourself for not staying stuck in a dead-end situation, but it’ll also free up a ton of mental energy for things like school/work/friends/family and whatever else is occupying your thoughts right now.

5. Give yourself a little space

If you truly want things to work out then give both of you time and space to figure things out on your own; it may seem like cruel and unusual punishment at first but if they’re worth it they’ll come back around, no matter how long it takes them (sometimes things just take longer than we’d like).

Keep in touch every now and then so that there isn’t any confusion about your intentions or whether or not you’re still interested; but don’t allow yourself to get dragged into an endless cycle of chasing them or waiting for them – either way all you’ll do is waste time and energy, both of which are better served focusing on everything else in your life instead.

Once you’ve done all you can to stay on their radar and show that you’re ready and willing if they ever decide that they want a second chance, move on (again).

It doesn’t matter how long it takes or how much longer you need to go without them; just do whatever it takes for you not to have any contact with them going forward, even if it’s something as simple as unfollowing them or deleting them from your messenger list so that every time you look at your phone or computer there isn’t anything reminding you of them.

Although it might feel like a big step at first, letting go is always easier than holding onto someone who doesn’t want you – even if they used to.

Also read: Pros and cons of friends with benefits

7.Do what makes you happy

Start getting back into your hobbies and interests; it’s important that you focus on staying positive and moving forward as best you can so that you don’t get stuck in a downward spiral of self-destructive behaviors like eating or overspending because they’re no longer a part of your life.

Keep yourself busy, surround yourself with good people who want nothing but the best for you, find new interests/hobbies/etc., and make sure that your self-esteem is strong by giving yourself plenty of positive affirmations and thinking about all of your amazing qualities.

At some point, they’ll notice what they’re missing out on and come back around if they really want another chance.

If all else fails, keep on being your happy self and remain positive! Remember that you don’t need anyone in your life who isn’t good for you.

Not everyone is going to want a relationship but if they’re worthy of another chance then trust that they’ll come back around when they’re ready, no matter how long it takes.

Although you may be tempted to sit around waiting for them or allow yourself to get dragged into an endless cycle of back-and-forth communication, stay strong and remember that there are plenty of other great people out there who do want relationships who will appreciate everything about you.

9. Always listen to your intuition

Finally, always trust that you’re doing what’s best for you and believe in yourself! Although it may seem like things will never get better or that there isn’t any other option but to wait around for someone who doesn’t want you.

Remember that things will get better in time if you allow them too and don’t allow anyone to convince you otherwise; they may have convinced you that they were worth a shot before but just because they said something before doesn’t mean it’s true.

In conclusion, regardless of whether or not you choose to stay positive and move forward or decide that it’s best for you to sit around waiting for them – just remember that there are plenty of other great people out there who do want relationships and will appreciate all of your hard work.

These relationships may be more than a little rough at first but once you’ve decided that enough is enough it will get easier and easier every day.

Take care of yourself, do what makes you happy, surround yourself with good people who want nothing but the best for you and most importantly, listen to your intuition – if something doesn’t feel right then trust your gut – either way, things will work out how they’re supposed too because they always do. Best wishes.

50+ Questions to ask your FWB

What are friends with benefits?

Your complete guide to friends with benefits relationship

Naveen’s expertise as a self-help and relationship Coach has been highlighted through his articles in thoughtcatalog, themindsjournal, elephantjournal, power of positivity, medium, substack and marc and angel to name a few.