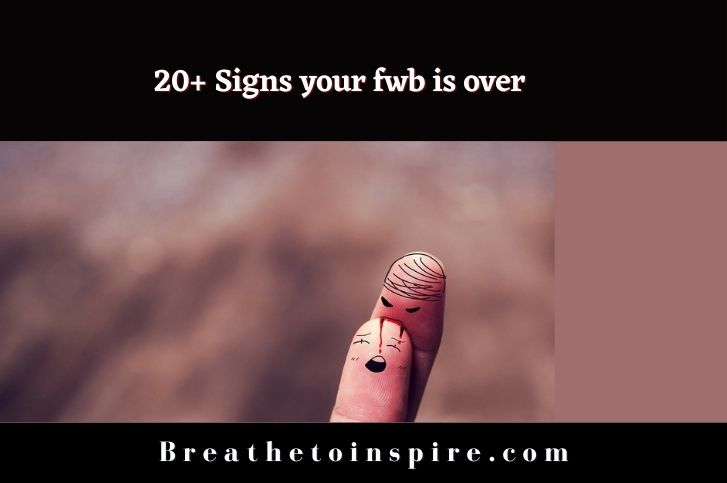 How to tell if fwb is over?

Like any other relationship, Friends with benefits relationships don’t last long. When it does come to an end there is usually a reason for it.

There are many telltale signs your fwb is over. Either they lack emotional maturity or have an unhealthy emotional attachment or any other common relationship issues.

If you’ve been in a FWB situation for an extended period of time and start noticing some of these red flags, it might be time to move on:

A friend is acting distant. If your friends have a significant other, they might not be as excited about seeing you, because they’re worried their partner will find out. You’re avoiding talking about your feelings and/or future together:

Avoiding deep conversations isn’t normal in any type of relationship—no matter how casual. When couples avoid talking about feelings, that’s usually a sign they aren’t emotionally invested in one another.

Also read: Can fwb turn into a relationship?

If you notice at least a few of these signs, get yourself prepared. It’s time to move on. You can keep being friends or just move on completely.

Whatever your choice is- it will be better than stressing over someone you had s#x with once in a while.

signs fwb is over

1. Getting involved in things together

From spending every weekend together to moving in together, there’s a chance he or she is starting to develop romantic feelings for you.

While you may not have any problems with being in such a serious FWB relationship, don’t be surprised if he doesn’t feel ready.

He might be hiding his emotions from you because he’s scared of getting hurt again.

If your FWB partner has feelings for you but you don’t feel exactly how he does, it might mean that things are about to get complicated!

Perhaps he’s questioning whether or not he is ready for a serious relationship with you yet, which would mean he might be getting scared of commitment?

Or he might have a secret and don’t know how you’d react if you found out what it was.

If you look like a couple on social media, chances are people will start thinking that you two are together so there’s no hiding it anymore.

Friends may even confront him about your relationship; while they might just be looking out for him, remember that not everyone likes FWB relationships so he may start doubting himself as well.

Even though being too attached is never healthy for a friend with benefits, taking things too slow isn’t either.

He might think that since you aren’t pressuring him into anything serious means that he can take advantage of your time.

When in reality he should be doing everything possible to make sure it doesn’t change at all unless both parties agree upon it; otherwise things could get ugly very quickly.

Being able to trust someone completely takes time, but if your guy seems uncomfortable around other guys then chances are something is going on inside his head.

Your FWB shouldn’t get upset when you’re hanging out with male friends but if after time passes by and these instances keep happening then there might be some reason behind it.

His insecurities will slowly come up and once they do you’ll see them weighing every option within reach before making any decisions; he’ll want to see exactly where you stand before moving forward.

Just because he wants more out of your relationship doesn’t mean that he’s ready for anything serious just yet.

Also read: Pros and cons of friends with benefits.

1. The what are we? conversation is starting to happen more than once a week.

2. You’re not even sure you like each other that much anymore.

3. You never, ever hang out outside of bed.

4. At first, FWB felt effortless—now it feels like a grind.

5. Your friends and family don’t know about your situation—and you’re starting to feel guilty.

6. You’ve made your feelings very clear, but your friend still won’t change anything.

7. There’s always some kind of drama or tension.

8. One of you has started dating someone else.

9. You’re feeling better about things without him/her around.

10. One of you is trying to get over an ex while in an FWB-situation.

11. Neither one of you will make any changes.

12. Both of you have ended up spending way too much time thinking about s#x.

13. Any time either one of you talks about wanting something more, both parties clam up.

14. An argument could be easily resolved if only one person just changed their behavior.

15. It’s so easy to slip back into old patterns

16. Neither party really trusts each other.

17. Either no one is really seeing anyone right now or everyone involved is seeing multiple people.

18. Your s#x life goes from practically every day to seeing each other once a month.

19. You begin making excuses not to hang out, and he/she isn’t trying as hard as you are.

20. When you spend time together, it’s always in group outings.

21. There’s no sense of chemistry or anticipation for your next meetup.

Instead focus on figuring out if something serious has happened in his life that requires attention, or perhaps it’s time to let go.

Once you’ve reached a certain level of intimacy in your friendship and benefits begin coming into play, then no one said it had to end.

So here are three ways staying platonic friends is better than trying desperately to fix a messy situation:

1. Doing right by yourself

You may worry about hurting your partner but don’t forget about yourself as well; women tend to give until there’s nothing left, allowing men walk all over them until she eventually breaks down from feelings of resentment and hopelessness.

It’s okay to be upset and not feel great after a breakup, but it’s important to remind yourself that you deserve better and move on.

Sometimes it’s easy to get caught up in what-if scenarios, believing that finding love again might be impossible due to a few past experiences with hurtful partners.

But if you force yourself back out there and put a smile on your face while you interact with new people, who knows what amazing opportunities may present themselves? There is always someone out there for us, we just need to be patient.

Just because he decided to be honest with you doesn’t mean that he will be ready to commit to a serious relationship.

A man is allowed to have needs and desires, but if he refuses to fulfill those desires and keeps lying about them, then it’s time for him to leave.

Remember, no matter what happens there are always options for your future; you can’t just sit in a corner feeling sorry for yourself, so step up and use your energy towards building your confidence and learning something about yourself along the way.

Also read: Questions to consider before enter into a fwb relationship

Here are a few Tips to maintain a friends with benefits relationship.

Don’t rush into it. Whenever you start a FWBs relationship, always be 100% sure that you are on the same page. I know that it’s kind of obvious, but don’t assume anything.

One or both of you might not actually be ready for it and rushing into something like that can ruin a good friendship and make the experience really awkward.

Make sure to talk things through with your potential friends with benefits before actually getting physical with each other; save yourself some time and effort and try to avoid potential drama by just laying all your cards on the table.

Also read: What does FWB Mean?

That way there won’t be any misunderstandings between you two! Plus, it’s always better to get to know someone properly before starting a physical relationship with them.

Also, it’s best to just cut ties immediately because if you start seeing someone else – then your friendship might get even messier.

Friends with benefits is a casual type of relationship so it’s not meant to last indefinitely or be used as a tool for repairing an existing relationship.

Basically, if you are looking for something long-term, friends with benefits is definitely not for you.

Also, if neither of you is ready to have anything serious and someone starts getting possessive or clingy – then that’s another sign that things probably won’t work out between the two of you.

Also read: What are friends with benefits?