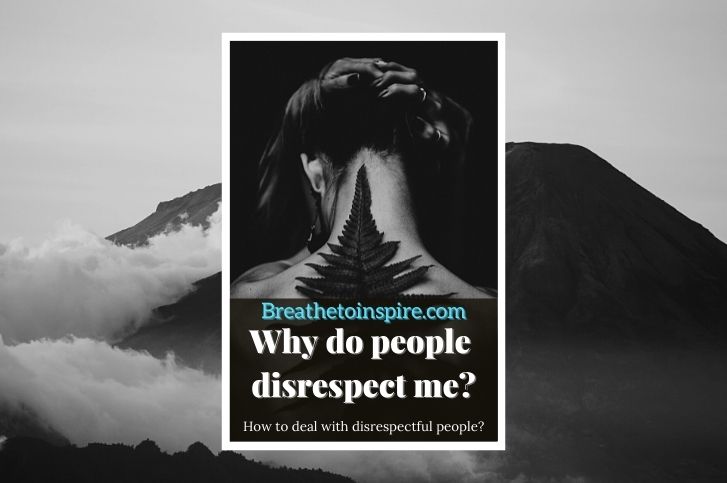 Respect is the fundamental goodness and highest value we can find in ourselves.

It is the driving theme in every work and every life story. It is what separates good people from great ones. It is what makes society function — why people work hard, why people learn and succeed, why families succeed, and why nations prosper – because everyone respects the other.

That basic decency is in danger today. Over time, the disrespect has come out of the closet and become common.

We see it everywhere: in our homes, on the street, and in business. And If we experience it personally, then we begin to question why do people disrespect me all the time?

Such common disrespect is seen as an acceptable way for some people to treat others as less than human.

However, It is important that we deal with the problem in a more constructive way. The best way to resolve this is with a clear understanding of why someone might have started disrespecting you in the first place.

Highly recommended related article: An Essential guide on how to stay calm and relax your mind in every situation?

So, What does disrespectful mean?

Disrespect is an interpersonal dynamic that occurs when one individual or a group of people treats another with indifference and in a way that makes him or her feel inferior.

It can be unconscious; most of us don’t think about what we do in terms of others. But disrespect is often deliberate, too.

When low expectations are set for someone or something, they may feel misunderstood or belittled.

To restore balance, we need to learn to respect people and institutions, even when we disagree with them. After all, the art of empathy is a mark of great personality.

What is considered disrespectful behavior?

Disrespectful behavior in a person has many shades of meaning –

Examples of disrespectful behavior may include:

These behaviors are rude and inhuman and show that a person has no regard for other people.

They may seem harmless at first, but they have the potential to build resentment and dislike toward you in the long run.

Those who condone disrespectful behaviors are usually ignorant about how they affect those around them.

However, disrespect is learned. We are socialized at a young age to respect others, and we learn from our families and peers what is acceptable behavior. Some people grow out of this behavior, but others need help getting rid of it.

The only essence is that we should not treat others with deference or make them feel that their opinions or beliefs are inferior.

Where does disrespect arises from?

Disrespect arises from a lack of knowledge or understanding or an incorrect assumption about the other’s point of view.

In short, it’s anything that lowers the esteem or lowers the perceived value of someone else.

The root causes of disrespect are often known to everyone, and often can be easily explained. But often they are not—and so we must be careful not to pass judgment until we have investigated fully.

When someone disrespectful to you?

There’s a good chance when people are disrespectful to you, that means they are trying to protect their ego by telling themselves, they’re amazing and mustn’t be criticized.

And the only way to make themselves feel superior is by attacking others’ weaknesses and make them feel low.

However,  this only makes you seem more important to them. So in light of this, be aware of how you feel and keep your cool.

When someone disrespects you in such a way as to hurt your feelings, notice how they react. Are they upset? Angry? Depressed? Churning with resentment?

Why do people disrespect me so easily all the time?

If you wonder “why do I get treated so badly” and “why does everyone treat me with disrespect?” Then the answer for that is obvious. Most people lack the ability to understand, empathize or show concern for others. They only see relationships as a winner takes.

It can be hard to know when someone is disrespecting you, but there are some common reasons. Here are some of them:

If people do not give respect to you.

How do you know when someone disrespects you? Here is the list of disrespectful behavior and common signs of disrespect from people.

Why do we allow others to disrespect us?

Very often, most people allow when someone disrespects you in your own home, in the workplace, in friendships, or in relationships.

A common reason for that is, that we allow it because we are emotionally incapable of hurting them back. And we know how it feels to get hurt. So, we don’t want others to feel similar pain.

Here are a few more lists of reasons why we allow others to disrespect us:

That said, we tell ourselves we won’t let others’ opinions bother us, that we’ll eventually get over it because we are no strangers to suffering, so we allow it anyway as we get used to it.

For some people, it’s their entire life. For others, it might be just a few months or a few years. Regardless of how long they’ve been suffering, though, they have one thing in common: they allow others to disrespect them.

How to deal with disrespectful people?

What to do when someone disrespects you?

There are times in life when it is necessary to take a stand and challenge a perceived authority.

In situations like when you do not know what to do when someone disrespects you, What should I do when my friends, family, or partner disrespect me? It is easy to become frustrated and even angry.

When someone disregards you, says something means to you, or shows you indifference, there is no right response.

In such cases, it may be necessary to ignore the behavior and remain silent. But that means taking a negative attitude toward others and putting yourself down.

It’s easy to get angry when others are hurting or having problems; it’s harder when someone else isn’t hurting, but you are. So the trick is to recognize when it’s appropriate to speak up or to remain silent.

Here are some tips and ways to deal with disrespectful people.

1. Ask the right questions and work on the solutions:

The first step is to ask yourself why this person is bothering you so much and being disrespectful to you all the time.

Is it because of your personality?

Does the way you act make them uncomfortable?

Is there something bothering you that they are not telling you? If the answer is yes, then you need to work on yourself to become a better human.

If the answer is no, then it is important to know where you stand with the person.

This will help you avoid situations that make you feel uncomfortable or cause you to worry.

When someone is disrespectful, it’s natural to want to defend yourself and attack the person. But this only makes the situation worse and makes you look as if you are not taking things seriously.

Remember, everyone has a limit on their acceptable interaction with other people. If you can’t set those boundaries, it is easy for people to get triggered and develop a negative view of you.

When this happens, the danger arises of becoming an emotional rabid dog who lashes out at people who haven’t even done anything wrong.

3. Stand up for yourself at least for your self-respect:

There are times in life when we need to step in, no matter how rude or ill-tempered someone may be.

When someone is being disrespectful towards you, there is nothing wrong with stepping in and telling them what you think of them.

No matter how old you are or have become, you have the right to speak up for yourself. A disrespectful person may not realize that their behavior has damaged other’s emotional life.

If you want to have a successful, happy, and peaceful life, you need to learn how to deal with disrespectful people. This doesn’t mean you ignore them or pretend you don’t see them.

4. Do not take things personally:

Sometimes when someone disrespects another person and you have the power to stop them from doing so, it’s easy to feel like you have no power at all.

That’s why when someone disrespects you it’s important not to take it personally.

Remember that everyone has the same basic instincts and desires in life.

Even if you’re non-confrontational and friendly you might well be signaling to other people that you’re not afraid to speak your mind or stand up for what’s right. Those signals get reset whenever someone disrespects you, but they won’t go away completely.

5. Choose people who are good for your soul and remove all other toxic relationships.

We all have the potential to be disrespectful, rude, and unkind to each other. It is natural to want to please others and get what we want from them. And, sometimes we need to be told what we’re doing wrong.

There comes a time when it is right to end a relationship if there is no going back. If you need to spend time with someone who is not ideal for you.

Put the thing you want on hold until you can get rid of them. And, if you think it would be difficult to find someone else, try making a list of qualities you value in a partner and filming yourself falling in love with them.

Try everything you possibly can to make yourself whole again.

Next time, when you ask yourself “Why do people disrespect me?”  And before making yourself feel low, just try to remember the above ways to deal with disrespectful people and implement them if you feel them useful.

Moreover, Disrespect is something we can’t stop from happening. People are there to criticize, demean and hurt others to make them feel better. And that’s their ignorance.

But, It is important to remember how you respond to each event that happens to you.

No one has the power to hurt you until you allow it.

So my suggestion is, it is better to know where you stand with the person. It is better to set boundaries and expectations in a polite way. You should not let anyone make you less important.

If they are making fun of you or discriminating against you, it is important to stop that at the beginning and not let it escalate into something worse.

Even if they don’t stop after being given too many chances, then the best solution is to cut them off from your life completely; at least protect your self-respect and inner peace.

9 shares
This page may uses affiliate links. When you click an affiliate link, we get a small compensation at no cost to you. See Our affiliate policy for more info.

1 thought on “Why do people disrespect me: Your deep guide to deal with disrespectful people”