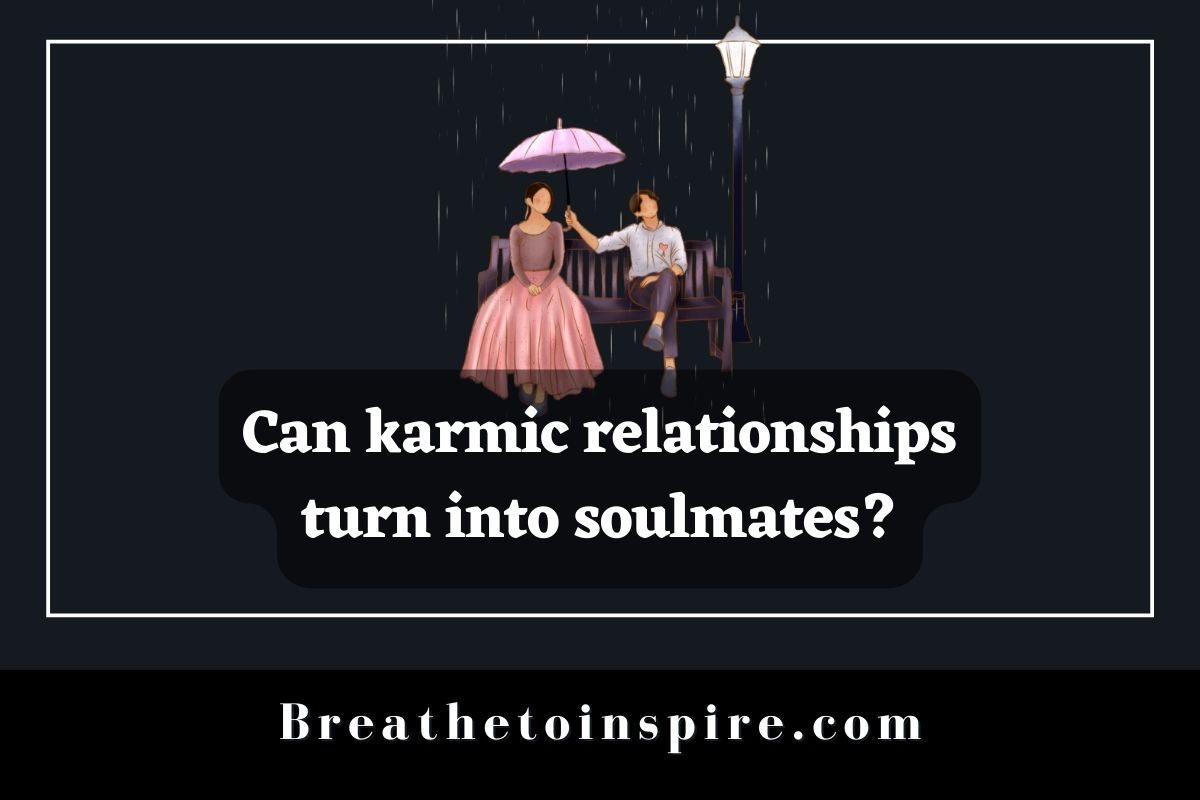 Karmic relationships begin with an attraction and can include intense emotions, chaos and turbulence but end up in two individuals realizing that they were meant for each other.

People who are involved in a karmic relationship tend to get so caught up in their relationship it can’t be endured.

Their passion for one another is so strong, that both partners may think that it’s never going to end.

When your relationship seems destined for a break-up you need some guidance now rather than later.

These kinds of relationships aren’t easy to handle and many couples find themselves hurting deeply after the split, but they don’t realize that they have been hurt before and this is part of karma (karmic relationship).

Before that let’s understand briefly about karmic relationships:

Karmic relationships are filled with excitement and conflicts, often at the same time. These passionate connections are more addictive than they are fulfilling.

There’s always a sense of urgency in a karmic relationship, which may feel satisfying for a while but eventually takes its toll on both partners. Because it’s not grounded in anything other than an intense physical attraction or emotional attachment.

In this type of love affair, you’ll find yourself getting close then pulling away over and over again until you reach an inevitable conclusion or break up for good.

It can be very confusing if you’re trying to figure out where your partner stands, since their feelings towards you can be so changeable.

The highs and lows make it difficult to get through everyday life without feeling exhausted.

Don’t get confused between both karmic soulmates and soulmates. These are just 2 out of many soulmates as per multiple soulmates theory.

However, here let’s understand the difference between these two types of soulmates. Karmic relationships enlighten you about the world and people. While your soulmates teach you to cherish yourself. In a soulmate connection, you feel whole, balanced, and content.

The most crucial thing to realize about karmic relationships is that your soul has decided to acquire this lesson in order to develop in knowledge, awareness, and understanding.

Your karmic relationship may teach you a difficult lesson that will likely give you a lot of suffering for now, but in the long run, it will help you grow as a person and bring you closer to inner peace.

Can karmic relationships turn into soulmates?

Although there’s a lot of passion in these relationships, there isn’t enough fulfillment to keep them going.

However, karmic relationships can be Karmic soulmates. But karmic soulmates are completely different from a soulmate. Soulmate literally means “a soul’ who made for the “other soul” and destined to stick forever no matter how much challenges come in-between.

Whereas, Karmic soulmates are people who have been coming back together throughout many lifetimes to teach each other lessons, help you evolve spiritually and eventually leave.

But, it’s very rare that karmic soulmates make their relationship successful. It may be possible only if their efforts are mutual and their desire of being together should be much more stronger than their tragic destiny; which is break up or divorce or death.

Also read: Can friends be soulmates? (Here is what research says)

Can you end up with a karmic soulmate? Yes. The spiritual belief behind karmic soulmates is that everything happens for a reason and we come into contact with certain people in our lives to learn what we need to learn – sometimes through difficult times.

If you feel like you were drawn to someone by fate but don’t end up together, then they could be your karmic soulmate.

If you believe in the concept of reincarnation, then your karmic soulmate can be your past-life karmic partner who is destined to meet you in this life and teach you some lessons and then disappear. That’s why you feel such a strong connection to them.

Your karmic soulmate might be another version of you in another dimension. They might also just be someone with whom you’ve crossed paths before who needs your help to get through something they’re struggling with now.

What matters most is that you recognize the red flags of this kind of relationship early on and take care of yourself first, especially when it comes to sorting out your own feelings.

Stay open minded and try to understand that this person will never be able to fulfill your soul. Maintain distance and don’t allow yourself to get too emotionally invested in him/her. Focus on self-love, and accept that you deserve better.

When you work on yourself, and make necessary efforts, eventually you will attract someone who matches your soul and make you whole with harmony, love and peace.

It’s essential to realize that they aren’t intended to be long-term commitments.

However, if both partners survive all the turbulence, toxicity, conflicts, and their tragic fate, it’s possible they can heal their past and rekindle their future together. They can start a new relationship but there is no certainty it will succeed too.

So, the only solution to make your karmic relationship work out successfully is to realize that you both are karmic soulmates.

Because, in the beginning you might not know that you are in a karmic relationship and you couldn’t have known what actually karmic soulmates are?

So, when you both understand that you were in a karmic soulmate relationship, things change. Both of you would want to become true soulmates.

That’s because, at this point, both of you can easily see the patterns emerging in your lives. You’ll find the reasons behind everything which happened between you two till date.

You’ll know that you need each other to complete each other and break your past-lives fate from repeating itself in this life.

And that’s only possible when you both are aware of the purpose of each other’s existence and realize the ultimate truth, i.e., No person, not even your soulmate is perfect. They can only be ‘perfect’ once you change your perception of perfection.

One thing to be remembered is that, “No eternal soulmate relationship can survive without working on it. I hope this helps. Good luck.