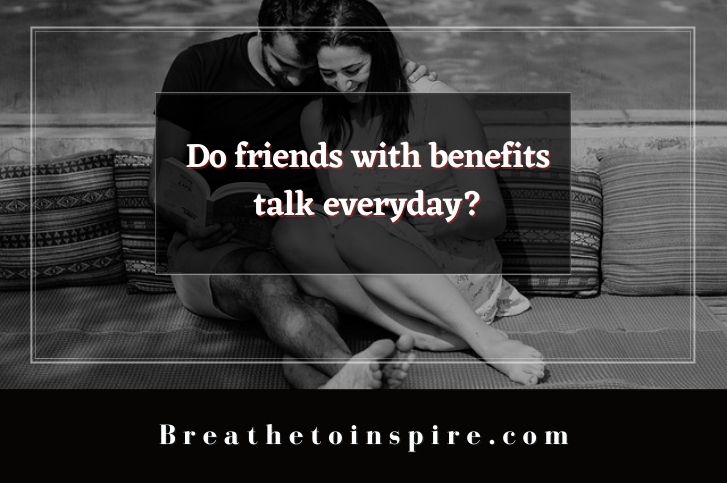 Do friends with benefits talk everyday?

Obviously Yes, If both friends are living together as they have to face each other every day. Also, if you live outside your friend’s town and country, then you can’t really avoid it.

You will certainly discuss details and plans for future meetings in detail via chatting or phone calls as there is no way that you’ll be able to avoid talking about how excited you two were for last night’s date or how much fun last weekend’s trip was.

Sure texting can play a part in a conversation, but most of it takes place during 1:1 conversations that simply cannot be avoided unless both people don’t actually want to see each other which rarely happens.

There can be occasional breaks but that depends on the situation.

Also read: How to be friends with benefits? (12 Steps)

If you see each other as more than just s#x buddies and consider one another as actual friends, you’ll probably spend plenty of time together outside of your intimate rendezvous.

As a result, chatting online or over text will be an inevitable part of your routine.

Because most people don’t want to feel like their partner sees them only for s#xual reasons (and vice versa), it’s important that both parties act nonchalant about what goes on behind closed doors.

Also read: What does friends with benefits mean to a guy?

Some FWB couples see each other on a weekly basis while others keep in touch on a daily basis. The main thing is that they are both enjoying their time together and can foresee future dates.

Talking every day isn’t necessary for FWBs since there’s no commitment involved.

If you find yourself spending more time on your phone than interacting in person, it’s probably time to reevaluate whether you’re still interested in having s#x or if it’s time for something else entirely – such as actually getting serious about your dating life.

Regardless of casual or committed FWBR, It really depends on each individual case.

Some FWB relationships might look more like friendships than casual flings, so spending an hour or two texting back and forth every day makes perfect sense for both parties involved.

On the other hand, a lot of FWBs keep it as simple as possible by not calling or texting unless they have already made plans in advance.

In any case, most people tend to get into a routine once they know what works best for them, so don’t be surprised if you start talking less frequently over time.

That being said, FWBs are no one-night stands, and keeping up conversations on a daily basis is not necessary or even expected for both parties – because, at their core, FWBs are all about fun, S#x and nothing more.

Like I mentioned before, there is no rule for how often you two should have s#x unless there’s commitment involved, but usually, FWBs meet more often than not.

Therefore talking happens more often as well which means spending time on 1:1 conversations that simply cannot be avoided unless both people don’t actually want to see each other which rarely happens.

On the other hand, if you’re just seeing each other for s#x from time to time and really don’t care about seeing your partner outside of that environment, then there’s no need for a close friendship.

The important thing is that both people know where they stand and enjoy spending time together even if they don’t see one another often.

In conclusion, whether Friends with Benefits talk every day or not really depends on the boundaries they set for each other.

FWB rules they have created before even they began their relationship and also it depends on each individual situation and what both parties actually want out of their physical affair.

Some FWBs have a tendency to spend time together outside of their intimate rendezvous, so you’ll probably see each other at least once every couple of days.

If you live together and see each other daily in person and don’t really need to chat via text messages, then obviously you won’t chat every day.

But if you are single and haven’t seen your FWB in a while then it might be perfectly normal that you both text all day long.