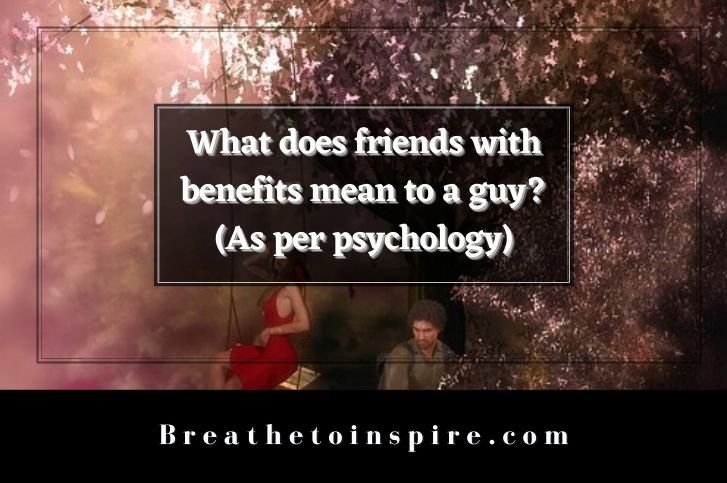 In recent years, several articles have been written on what motivates men and women to agree to a friends with benefits (FWB) relationship.

A lot of people mistakenly believe that men and women engage in these kinds of relationships because they enjoy casual s#x without any commitments or complications. That is true for some, but not all FWB relationships.

For some people, FWB relationships can actually work out into long-term and meaningful romantic partnerships that endure beyond a few months.

In this guide let’s explore all these questions along with some subtle signs that a guy wants a serious committed relationship with his FWB.

Do guys fall in love with friends with benefits?

Yes, guys can indeed fall in love with their friends with benefits. In fact, statistics show that most young men who engage in FWBs find themselves falling for their partner within a few months.

A study published in the Canadian journal of human s#xuality regarding friends with benefits relationship among Canadian undergraduates of 146 men and 135 women; ages 18-40.

A significantly greater proportion of men than women entered the relationship hoping for it to turn into a dating relationship and expressed desire to avoid an FWBR in the future.

Based on the results, gender differences in FWBRs are nuanced and confirm and depart from traditional gender roles.

In another longitudinal study of friends with benefits on 191 people conducted two online surveys that were one year apart. They found that only 15% of people are able to change from being FWBs to being in real relationships.

It is a known fact that men are easily led by their genitals, but we also know that they can develop deeper feelings for women that they have s#x with. In 2016, college students were asked how long it took for them to fall in love.

Their responses were as follows: Only one out of 10 people who had s#x on a first date said they fell in love at first sight. 15% said it took one month or less and 30% took six months or more.

However, over 50% of men who slept with their FWB admitted feeling s#xually attracted on a deeper level after just a few dates. So yes, it is very possible that both men and women could end up falling in love with their friends when having no strings attached s#x.

What usually happens when you’ve fallen for your friend with benefits?

The same thing that happens when you fall for someone else, exactly – because your friend has to eventually deal with everything other lovers bring upon him/her (irrational jealousy etc.) unless he/she wants to stay totally unattached all his/her life.

Friends with benefits just don’t cut it because there’s always been a part of yourself left unsatisfied when dealing with no strings attached situations.

What does friends with benefits mean to a guy?

As per psychology men and women view FWBs in a different way. Women see FWBs as lacking romance and commitment, but men see it as just another type of open relationship that allows them to explore their options.

A study conducted at NYU reveals: About 44% of men surveyed said they enjoyed having casual s#x with multiple partners while only 20% of women were comfortable doing so. So yes, both sides agree that there’s nothing wrong with being friends-with-benefits except when feelings get involved.

Guys often go for friends with benefits in order to avoid any entanglements, like commitment.

They fear that dating will lead them down a path of some sort, and they want freedom; freedom from pressure, from having to feel responsible for someone else’s feelings and emotions.

Also read: What does friends with benefits mean to a guy? (Full guide)

That’s why FWBs are so appealing – because you don’t have those commitments. Your partner isn’t pressuring you into exclusivity or feeling like s/he can demand more emotional investment than you’re willing to give.

It allows both partners total freedom in an otherwise highly intimate situation because it’s one thing when s#x is good and convenient but another when it’s good, convenient AND fun. The question of what do men look for in women who have no strings attached comes up all time.

As per FWB guys perspective, they view their FWB as attractive for many reasons: her s#xual prowess, spontaneity, un-invested nature etc. These aspects make your new friend unattainable, which makes him even more interesting to be around.

Men go after FWBs not only because they find them s#xually attractive but also because of their personality traits that bring excitement and novelty into his life. Yes, men fall in love with FWB eventually but do they want something real out of it?

Most men agree that while they might get emotionally involved at first, especially if she was the first woman he fell in love with (which happens quite frequently), eventually he’ll come back around to his senses and realize there’s nothing there worth pursuing other than amazing s#x.

Also read: How to be friends with benefits? (12 steps)

How to turn friends with benefits into a boyfriend?

Well, if you truly feel that there is chemistry and want things to move in that direction, ask your FWB out on a real date and see where it goes from there. But remember: he may not be interested just yet.

Even though you’ve been intimate together and enjoy each other’s company, s#x does not equal love for everyone. When deciding whether or not to take things further, it’s important to be honest about your expectations, so don’t get too attached too soon.

If he turns you down, consider keeping an open mind and seeing what happens when you bump into him next time.

Many people feel awkward around someone they used to have a casual s#xual relationship with; take advantage of that by chatting him up during social gatherings without making any formal plans beforehand.

If all goes well, maybe one day he’ll see you as something more than just a friend! If it doesn’t work out well, then at least it’s good to know before investing even more time and emotions!

10 Signs your fwb boyfriend likes you as more than a friend with benefits and might even want a relationship with you.

1. He’s more affectionate and friendly towards you when you meet in person – he will hug you, hold your hand, rest his head on your shoulder etc.

2. He flirts with you more in person than he does via text or over social media every single day.

3. He asks you a lot about your day and what you did when you were away from him for extended periods of time. He shows interest in your life, not just s#x or being around each other.

4. He acts like your boyfriend and protects you, instead of acting like a friend, who is always too busy to spend time with you. Being protective isn’t only about jealousy, but it shows that he cares for your safety and well-being.

5. He shares his personal life in detail and includes you in his future plans together. FWB usually don’t care about your long-term goals because they don’t expect anything out of a casual fling.

6. He becomes responsible for his actions and tries his best not to hurt your feelings. So he opens up his feelings gently so that you can come into a healthy FWB-to-relationship phase without hurting either of you emotionally.

7. He cares about your opinion and values it. Friends with benefits are usually not that concerned about what you think and whether or not you approve of their actions, because they can do whatever they want without thinking about consequences or hurting you emotionally or physically.

8. He takes you on multiple dates and holds your hand in public, tells his family about you, brings up marriage, children, etc. in normal conversation as just being friends is not enough for him anymore.

9. You can see genuine love, loyalty, and care in his eyes and gestures when he talks about you or looks at you even though there is no s#xual tension between you both anymore.

10. He makes you feel special, and important and he’s not afraid of expressing his feelings for you even though you are in a casual relationship together.

In conclusion, not only girls but men too can indeed fall in love with their FWBs, and sooner than you might think.

It really depends on how strongly each person feels about his/her partner and how much they are willing to put up with having s#x without an emotional connection.

Generally speaking, s#xual attraction alone is not enough for anyone – both men and women want closeness, chemistry, compatibility, and companionship as well.

This kind of arrangement could very well turn into something more serious than it seems at first sight if both parties involved are willing to make that leap from FWB/FWB to a real romantic relationship.

However, as always when we talk about such issues as relationships or feelings, one must understand that what works for some may not work for others.

2 shares
This page may uses affiliate links. When you click an affiliate link, we get a small compensation at no cost to you. See Our affiliate policy for more info.