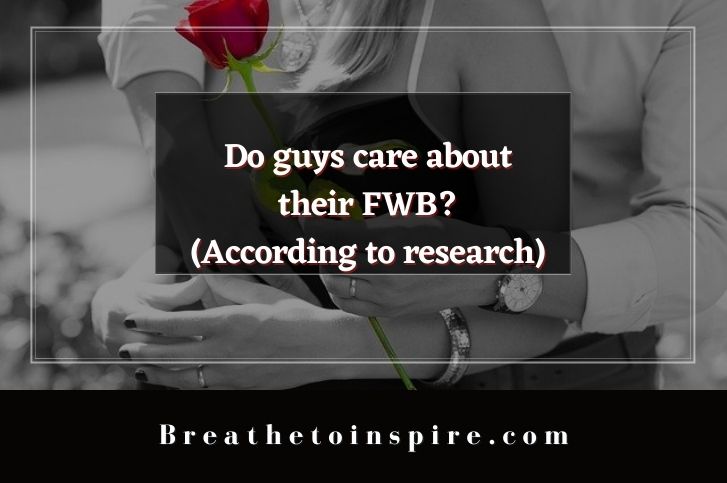 Do guys care about their fwb?

According to a study of friendship and physical intim#cy among U.S. undergraduate students conducted by Lehmiller (2012), about half of participants indicated that they had developed feelings for their FWB partners, while only 17% said they had not.

This might be because people have a tendency to de-emphasize potential problems in relationships that are emotionally satisfying at the time – which are more likely encountered when engaging in FWBs than dating or marriage.

Guys definitely think about how things will play out once they’re finally done having physical relationship with someone new.

However, In another online survey conducted by Lehmiller on 411 people ages 18 to 65 involved in “friends with benefits” relationships.

Also read: Do guys fall in love with their friends with benefits?

The survey participants included many het#ros#xuals, as well as some homos#xu#ls and bis#xu#ls. During their study, they found that s#x was more often the motivation for men rather than women to start “friends with benefits” relationships.

Women were more likely than men to have become involved with a partner because of their emotional connection.

According to the survey, more men hope their relationship will stay the same over time (i.e., they usually want to continue to be “friends with benefits” in the future).

In general, women preferred either a romantic relationship or reverting back to a simple friendship after a relationship transition.

Surprisingly, even though men perceive themselves as being less attached to their FWB than women do, men nonetheless want more from these kinds of relationships than just casual fling.

They expect their female partners to share personal information and develop genuine feelings for them; but, it’s been observed that most men don’t reciprocate.

It could also be because most men like to feel like they can easily walk away from a woman who doesn’t meet all of his needs—even if he doesn’t necessarily mean it.

Just know that you aren’t alone if you tend to end up feeling disappointed when trying to pursue any kind of s#xual encounter with men, particularly those who act uninterested and incapable of true love.

Find yourself a guy who likes you enough to treat you right! Most importantly, pay attention next time your so-called friend tries stepping outside your boundaries without getting your consent beforehand.

Don’t let anybody take advantage of you s#xually. A man worth keeping around will respect your wishes, values and opinions before expecting a roll in bed.

That includes refusing to put pressure on you for extra one-on-one time together when you’ve already set strict limits together.

If you’re worried that a guy may cross your comfort zone, let him know what you consider to be off-limits and stick to it.

Sure, they’ll still try to get more, but at least you won’t feel blindsided by violations. Friends with benefits should never make each other uncomfortable.

Being in control of your own body and s#xuality is a huge part of maintaining healthy relationships.

So always be sure to ask questions when necessary and insist that a partner follow your stated rules.

If you remain assertive in communicating with a FWB, there will be no misunderstandings about where you stand and what your expectations are.

No matter how tempting it is to accept phone calls, text messages and frequent invitations to hang out, resist following through with every whim of a partner who constantly interrupts your life.

Also read: What does friends with benefits mean to a guy?

Give yourself a break. Ultimately, FWBs are based on mutual benefits (no pun intended) rather than feelings. Thus, it would be wise to choose someone who won’t use feelings as leverage in maintaining control over you!