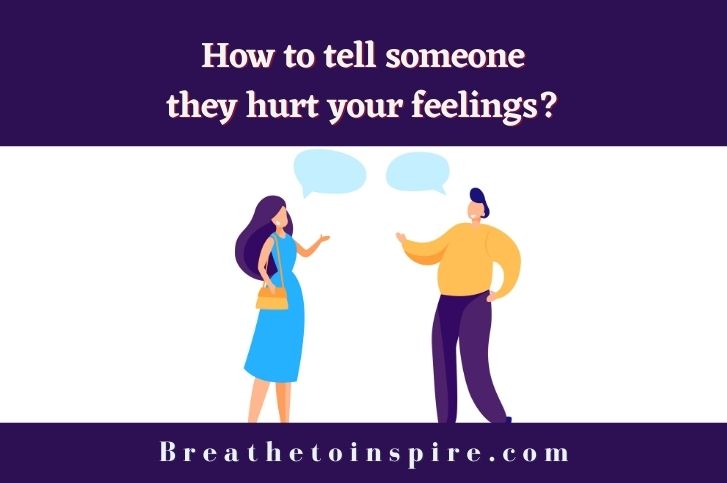 It’s not that easy to take criticism from other people, but it’s even harder to deliver criticism to someone else. How to tell someone they hurt your feelings without hurting them?

It can be hard to say these things, but at some point you might need to tell someone they hurt your feelings.

This can be tricky because you don’t want them to get defensive or offended, but there are ways to let them know that they did something wrong without causing any resentment or bad feelings.

If you use the right approach, you can be the better person while letting the other person know that their actions affected you negatively in some way.

Here are some tips on how to tell someone they hurt your feelings examples without making the other person feel worse than they already do.

Recommended reading for you: What to do when you are hurt by someone you love? (complete guide)

How to tell someone they hurt your feelings?

When you’re in the midst of an argument with your friend, it can be hard to know exactly how to express what you’re feeling without causing unnecessary drama or making things worse than they already are.

If someone hurts your feelings, don’t assume they know. We all make mistakes, but when we say something inadvertently insensitive it can really mess with a person’s feelings.

In these situations, it’s important to make sure that your message is clear and that your friend or partner knows exactly how their words have affected you.

Start by looking at their facial expression and body language—you may find clues in their reactions that suggest whether they realize what happened. If not, then give them a chance to apologize and change the subject if needed before explaining yourself.

To do so, however, you don’t need to say much—just asking them if they meant to hurt your feelings should be enough to get your point across!

Here’s how to tell someone they hurt your feelings without hurting them. Follow these 7 tips with examples.

7 Tips to tell someone they hurt your feelings: Examples

These are some steps you can take to make sure your discussion goes smoothly and leads to real change in your relationship.

1. Talk about your feelings.

It is important that we realize people can’t read our minds and know how we feel all of the time, so we need to communicate with them on a regular basis and let them know what is going on inside of us.

This way if something is bothering us then we won’t be holding it in and pretending that everything is okay when really it isn’t.

For example, if you are upset about something then it is okay for you to talk about it with them in a non-accusatory way.

They don’t have to feel bad just because you are unhappy with something that happened or how they treated you.

You can ask them if they understand how what they did made you feel and if not, ask them why so that they can learn from their mistake in hopes of not doing it again.

Maybe it isn’t even their fault but instead yours because of what your thinking at that moment was. Either way it doesn’t matter; we all make mistakes and we need to realize we aren’t perfect and neither is anyone else.

Telling someone that they are hurting you does not have to be difficult or uncomfortable, but at times it may seem that way.

You want to come across as confident but not overbearing while talking to your friend or loved one; only you will know what feels right for you both personally and within your relationship.

For example, you can say something like, When you didn’t return my call right away I felt sad and worried that you were mad at me. You don’t have to go into great detail about your emotions.

Simply letting someone know how their actions made you feel can be enough for them to understand what may need adjusting in future interactions.

This advice also holds true when addressing friends or family in more hostile situations. You don’t want to go overboard with accusations or threats of never speaking again.

Additionally, only you will know how far is too far for both parties involved. Just remember that everyone deserves an explanation.

If possible, don’t confront a person after an incident has just happened because there may still be emotions flowing through you.

Wait until everyone has had time to reflect and calm down before attempting any kind of conversation.

Also consider that sometimes people don’t realize their actions affect others negatively, so instead of saying things like you make me angry every day try starting off by saying I feel angry when…[insert situation here]. I wish you would stop doing xyz because…[insert why here].

For example, if you know that someone always pushes past you when you are trying to hold a door open for them.

Then explain how it makes you feel by saying I felt disrespected when I was holding open a door for you and then saw that you just pushed right on through without even noticing me.

Saying something like that should help show how their actions affect other people.

Cultivate empathy for your loved one’s situation: Make an effort to understand why someone is behaving in certain ways.

This can be done by trying to see things from their perspective or asking questions like Why do you think he/she acted like that? Listen carefully and keep an open mind; there might be reasons for their behavior that make sense.

4. Use I statements as much as possible.

When having a conflict with someone else using you statements comes off as attacking which causes defensiveness and keeps those involved from truly hearing each other out.

We want to avoid placing blame on anyone since it only leads to more fights and misunderstandings.

So we should make sure we always own up to whatever responsibility we played in whatever issue may be coming up between us at that moment rather than placing blame on anyone else.

It doesn’t change much in terms of what you’re getting at but it does help tone down hostility and might even draw out some empathy from them.

Because instead of feeling attacked or blamed they’ll feel like their own needs are being considered. Once there’s more understanding between both parties involved than fights can really be resolved properly.

5. Be present in that moment.

Make sure that when telling another person about their negative behaviors you remain focused on what you wanted to say and stick to it without getting sidetracked by anything else.

Remembering what you wanted to say will also help with step two (being direct) since focusing on exactly what needs addressing makes confrontation easier and less stressful.

Having said that, once we start addressing our problems we may find ourselves getting emotional and wanting to cry or lash out; feeling frustrated in these situations is normal and happens often in life! Our goal is still (and always) to stick to what we wanted/need(ed)to say without too much deviation so remember your plan!

For example, when you started talking about their negative behavior it might seem like an offshoot of what you wanted to say would be OK; but why do I always have to clean up after you? just popped into your head.

Although that’s an offshoot of what you wanted/needed to say, take a step back and remember that if it seems like it might get out of hand focus on staying with your original point!

Most people want us to succeed in our confrontations so they will hear our points even if we are emotional. When possible start with something positive or neutral so you can transition into how something negative made us feel without coming across as being overly emotional.

6. Explain how they can avoid situations like these in future.

Let them know exactly what behavior changes can come up next time so something like this doesn’t happen again.

Explain that forgiveness should not be mistaken for reconciliation and if that’s what they want then first and foremost, don’t make any promises; instead, allow them to express their feelings and listen without judging or interrupting.

Even if you say I forgive you, even though it is technically true as a fact, make sure that forgiveness is something you feel as well as something you say.

When your heart is filled with resentment, anger, bitterness or hatred toward someone who has wronged or offended us, it’s nearly impossible to really forgive them in an authentic way. Forgiveness doesn’t necessarily require reconciliation but both are usually aligned with each other.

For example, I can forgive that person for making me feel angry even though I still may feel angry. It’s not that I don’t have anger at all but I can find a way to make peace with my feelings toward them without allowing it to keep me stuck in an emotional prison of blame and resentment.

7. Avoid blame and Emphasize listening instead of responding.

Yes, there’s a very good chance that whoever wronged you probably didn’t intend to upset you and acted out because they too were uncomfortable.

However focusing on intentions and blame won’t get anyone anywhere — just accept what happened and take charge by owning your role in bringing up bad subjects.

Letting go of blame can be one of hardest parts but showing others why their behavior was hurtful does wonders for building trust! ​

If possible, get other people’s perspectives on things without immediately turning around to defend yourself or go on the offensive against them in return—no matter how tempting it may be!

Let them express themselves. Listen carefully to their response. Take some deep breaths and make sure your heart is open.

Make sure you should deal with these situations with a rational mind instead of completely emotional. Because most often people who hurt us don’t have empathy. That’s why you should align with their perspectives in order to understand why they behave the way they do.

Once you get into their personality you will come to know the reasons behind their actions and won’t allow their toxic behavior to affect you. This way, you can save yourself from so much emotional pain and hurtful feelings.

Recommended reading for you: How can someone say they love you and then hurt you?

What to do when someone hurts you emotionally?

How to deal with someone who hurt you emotionally?

1 thought on “How to tell someone they hurt your feelings? (7 Tips with examples)”