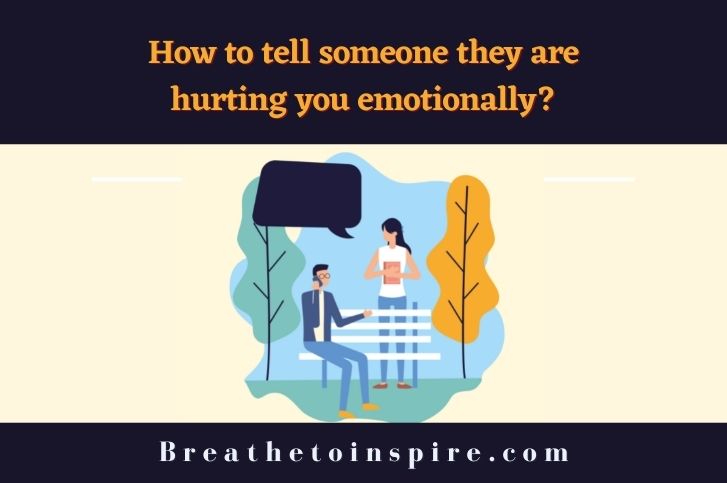 If you’ve been hurt how to tell someone they are hurting you emotionally? You know that it’s not easy to tell them how you feel about it, especially if you care about them and want to maintain the relationship.

Your instinct may be to ignore the situation, try to move on as quickly as possible, or hope that they never find out so that you don’t have to deal with an awkward confrontation.

One of the most difficult things to do when it comes to dealing with people in your life is telling them that they hurt you in some way or another.

Whether they hurt you intentionally or not, there’s always that lingering question in the back of your mind, Will they be mad at me?

Recommended reading: What to do when someone hurts you emotionally?

How to tell someone they are hurting you emotionally?

The best way to tell someone they are hurting you emotionally is by asking them right questions so that you can decide whether or not their actions are deliberate. For that, you can ask them about their intentions behind what they said or did instead of accusing them outright. This way, they can apologize if necessary and take responsibility for their actions without feeling attacked by you.

Meanwhile, you will get a chance to realize that you are too sensible to handle their intolerant behavior. To deal with someone who hurt you emotionally, you need to be constructive in your approach and be prepared with the rational mindset instead of completely oversensitive or emotional person.

To deal with such issue, here are some tips to help you tell someone they are hurting you emotionally.

7 ways to tell someone they hurt you

1. Tell them how it made you feel and why it bothers you.

In a gentle and kind way let them know how it makes you feel when they say or do what they did.

People have a hard time apologizing or forgiving themselves if we don’t explain how it hurts us, so really try to put your emotions into words.

The other part of letting people know how what they said or did made us feel is explaining why.

For example, let’s say a friend of yours was extremely rude and insensitive when you told them about something you cared about most.

Your goal in telling them how it makes you feel is two-fold: to explain your feelings so that the person will be able to acknowledge them and apologize if they were rude, and also so that if they weren’t being rude—but just didn’t understand what a big deal it was—you can explain yourself better next time.

If both of those things happen (which is totally possible!) then you know for sure that there will be no more misunderstandings in the future.

Letting someone know that something that was said or done caused you pain doesn’t mean raking them over the coals—unless their actions warrant it.

When first approaching a sensitive subject, avoid phrases like You always… and You never… as well as generalizations like No one else has ever made me feel like this before.

For example, instead of saying You’re a horrible friend, you might say I felt awful when I arrived at our last dinner party and realized that everyone had already eaten except for me.

Instead of You never consider my feelings, try I felt ignored during your discussion with Sally.

Be specific about how their actions affected you. This makes it easier for them to recognize their own behavior as well as take responsibility for it. In many cases, people aren’t aware of how their words or actions affect others.

3. Don’t be afraid of being vulnerable.

Tell them exactly what happened and how it affected you, no matter how embarrassing or silly that might seem to be at first—it will help them understand exactly where your boundaries are and how important those boundaries are for everyone involved

For example, if your partner is making fun of you and disrespecting you for who you are, say: I know you think my thoughts are silly but I can’t help feeling uncomfortable whenever we’re together. It hurts me and makes me feel like we’re not as close as we used to be.

While expressing yourself be firm but kind—kindness will go a long way toward helping them understand why what they did was so hurtful.

4. Talk about the consequence instead of blaming them.

Some people love apologies that start with I’m sorry and end with some form of but, while others need some actual words expressing how it made them feel for it to be really effective.

How can they know if something is offensive or hurtful unless you explain what being called awful does to your feelings?

If you really want to make them understand how their actions affect you, then an explanation of why that word triggered a strong reaction in you might actually help that person become a better person overall.

Talk about the consequences of their words, actions and behavior. If you express that without blaming them, it could even lead them on a path toward compassion.

Try saying something like, When you called me rude names, it really hurt my feelings because I already deal with enough negativity at work. The last thing I need is for my boss to be bullying me too.

If you’re just trying to give me constructive criticism then that’s fine, but I would rather hear that than feel even more awful than I already do.

Even if your explanation makes someone else feel bad about their behavior (like when a friend reads your reply and goes, Oh my god! That’s exactly how it came off!), keep in mind that not every apology has to start with I’m sorry.

You can lead up to an apology by laying out exactly what happened and how it made you feel before jumping straight into an admission of guilt.

5. Don’t show anger but approach with a rational mindset.

People will think you are overreacting when you get angry. But, our culture encourages anger among men while still discouraging women from showing any emotion at all other than happy-go-lucky enthusiasm about everything.

You are allowed to show anger when your boundaries have been violated. You are allowed to let go of any sense of politeness or kindness when someone insults you; after all, those social niceties shouldn’t keep anyone from speaking up against injustice!

For example, if your friend is making snide comments about someone else at dinner (it happens often, unfortunately), it’s OK for you to speak up and make it clear that what he’s saying hurts your friend.

Don’t let him get away with hurting others just because he thinks he has good intentions. Letting him know that his words are problematic can help him understand why anger or frustration might be justified in these situations.

Then, try not to overreact: Anger shouldn’t be an excuse for violence or verbally abusive language. It shouldn’t even be an excuse for harsh insults; again, other people will tend to turn on you if they think you are out of control.

Some people just aren’t good at apologies but many times they really want to try but just don’t know how. So when they offer an apology let them go ahead with it in their own way without critiquing or correcting them.

Other times, they may apologize and make excuses like I didn’t mean it like that, or try to come up with other reasons as to why they did what they did. That doesn’t matter. We should accept their apology but we don’t need explanations as to why they said/did whatever harm was done.

We only want them to recognize that they hurt us and then promise not to do it again (unless we give permission.)

Even once you forgive someone you aren’t expected to tolerate disrespectful behavior forever. In fact, forgiving means letting go of resentment so that it doesn’t fester inside you because forgiveness has nothing to do with condoning harmful actions.

We believe in giving everyone multiple chances to correct mistakes whenever possible; however, simply forgiving someone isn’t enough for everyone involved.

We always must remember offenses committed against us because forgiveness is about healing ourselves, not forgetting about someone else’s wrongdoings.

7. Tell them to take accountability and responsibility for their actions.

Whether they were aware of their actions or not, in an argument ultimately someone’s actions affect other people.

We always need to remember that although someone else may act in ways that make us angry or upset.

Some times they do it purposely and other times they don’t mean to make us feel that way. Therefore tell them and make them realize to take accountability or ownership over their hurtful behavior.

Responsibility goes hand-in-hand with taking accountability; as adults we need to take responsibility for what we said and did even if it isn’t entirely our fault (especially if).

If there’s one thing we all have in common, it’s that we’re human and we make mistakes. Because of that, it’s only natural that most of us end up hurting each other at some point or another.

And while most people want nothing more than for those around them to know when they’ve hurt them (because we care), we also do everything in our power to avoid having our own faults pointed out.

So regardless of how people’s irresponsible actions affect us, the key is to be understanding and move forward without carrying grudges or feeling like forgiveness isn’t possible.

Finally, the decision is up to you whether you want to correct their mistakes and make them better people. Or completely walk away from them.

Recommended reading for you: How to not get attached to people (complete guide)

15 situations when someone you love hurts you deeply

What to say to someone who has hurt you deeply?