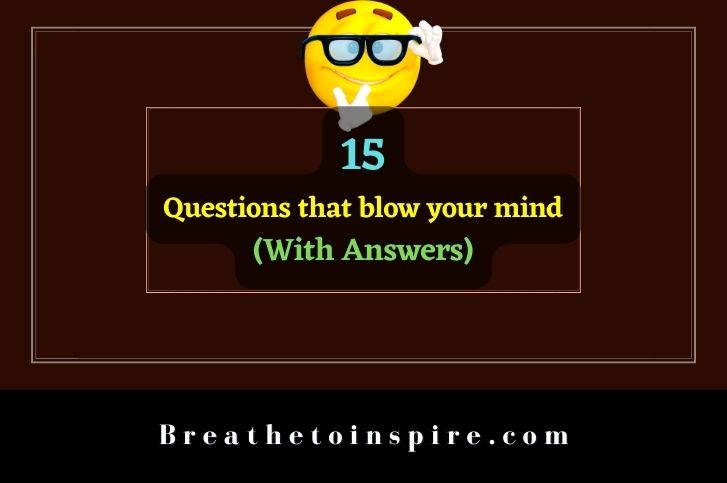 The questions that blow your mind are the ones that lead to new discoveries.

They are the ones that open your mind to new possibilities, and make you think about things in a way you never have before.

The best mind blowing questions are questions that push your boundaries and make you think outside the box.

They keep evolving and changing over time, as new information comes in or new technology becomes available.

Questions that will blow your mind are not only fun to solve; they can also help you become a better person. They give you an opportunity to explore your own creativity and expand on what you know about the world around you.

In this article, you will find a list of unanswerable questions that blow your mind (with answers)

Questions that blow your mind

Life is a mysterious quest. It just messes with our heads with its mind-blowing questions and twists, just like this question.

We can argue and agree and debate on this question but it’s the existence alone that knows the answer and it will keep on expanding, no questions asked.

2. Isn’t anything indescribable, describing it?

There are some things which can be described only in their simplicity.

Likewise there are some truths which exist in such complexity that they cannot be conveyed through language alone.

Also read: 37 Questions that mess with your mind

3. What would happen if you put somebody’s brain inside another person’s body?

That’s actually a very interesting question because people have been thinking about this for centuries.

Some say that the original person’s consciousness wouldn’t really take over. Others say that they would essentially be two people living in one body (or one person living as two).

Personally I’m more inclined to believe the latter because why else would people feel so different from day to day or from moment to moment?

Why do we change so much from when we were little kids versus when we’re adults?

If consciousness isn’t actually physical, then it makes sense that it might slip around between bodies like water or electricity

4. Who came up with the idea of Earth rotating around the sun?

It was proposed by Copernicus back in 1543. He argued that planets orbit the sun because he observed discrepancies in Ptolemy’s model.

His observations also showed him that planets are closer to Earth than what Ptolemy had shown them to be.

Basically Copernicus wanted to show that Ptolemy was wrong and he succeeded even though his work was met with fierce opposition at first.

In 1543, Nicolaus Copernicus detailed his radical theory of the Universe in which the Earth, along with the other planets, rotated around the Sun. His theory took more than a century to become widely accepted.

5. Who invented sarcasm? Can sarcasm invent itself?

Honestly nobody knows who invented sarcasm. I think sarcastically was born out of both necessity and amusement.

For instance, if someone said I’ve never seen rain before to a native Californian, the response could be Oh wow! You’re totally going to love it.

And so sarcasm was born out of giving someone a taste of how utterly amazing California is while simultaneously reminding them that they haven’t seen any other place in the world.

6. What if animals rule the world instead of human beings? What does that mean? Who decides that?

All these questions boil down to the same basic question: Is humanity really the best species to rule the planet?

Well, I guess that means humans need to stop making mistakes. Luckily we seem to be pretty good at doing that. After all, everything is turning out better than anyone could have ever imagined.

7. What is the sound of one hand clapping?

This question has puzzled philosophers and scholars for a long time. As far as we know, it is impossible to make a sound with just one hand.

With that being said, it is possible to create the illusion of a sound with nothing at all. This was famously done by the Zen monk Nansen in 1133.

8. What would happen if gravity stopped working?

If gravity didn’t work anymore, objects would be able to float off into space without coming back down again.

This is what happens during an earthquake where objects are lifted up and end up smashing into each other because they’re floating in midair.

We will never know the answer to these questions, and yet we spend our lives trying to find out. It’s a tricky thing, because we can’t answer these questions with logic and reason.

These are the mysteries that keep us awake at night and in constant pursuit of finding a solution.

Perhaps they are simply our purpose: to search for an answer that doesn’t exist, because that search is what gives our lives meaning.

10. We humans are all in pursuit of happiness but is it really possible to live happily ever after? And what if there is no such thing as happiness? What would you do then? What would you be happy with, or just contented with?

11. What is one thing humans have discovered about themselves since being alive?

Every new discovery about ourselves is usually met with resistance because it forces us to reassess who we are.

With every discovery comes the realization that there is still more to learn, which creates a sense of longing for knowledge and understanding.

Knowing this creates an immense pressure on human beings, which fuels anxiety, depression, and leads to many mental illnesses like addiction. But despite knowing this we persist in learning more anyway.

12. Who was the first person on earth?

There is no real evidence of when the first person on earth came along,

However, As per research, Planet earth has been around for over 4.5 billion years, but humans? For 99.998% of our planet’s history, humans were nowhere to be found.

It is estimated that Homo erectus evolved approximately 1.9 million years ago. On average, this ancestor had twice as large a brain as Homo habilis, and walked upright as well.

In addition to being the first direct human ancestor to leave Africa, Homo erectus also displayed evidence of using fire. More than a million years ago, Homo habilis and Australopithecus likely went extinct.

13. Is there any possibility that dragons and dinosaurs would re-exist in 20th century?

For example, fossils found in Siberia might belong to the world’s largest animal- ancestor of Triceratops and Tyrannosaurus Rex. Could this animal still exist today?

Since then, scientists have continued looking for physical evidence of these creatures roaming around modern day Earth- some believe sightings suggest that pterosaurs may actually inhabit remote parts of Papua New Guinea near Aitape even today.

14. What is the origin of the grass is always greener on the other side?

This phrase refers to an individual’s tendency to be discontent with what they have and want something that someone else has.

When things are going bad, it’s easy to start thinking about how good things would be if you were in a different situation.

Human means being rational, sentient (capable of feeling pain), and capable of speech- anything else that distinguishes us from animals is purely subjective. What do you think makes someone seem human?