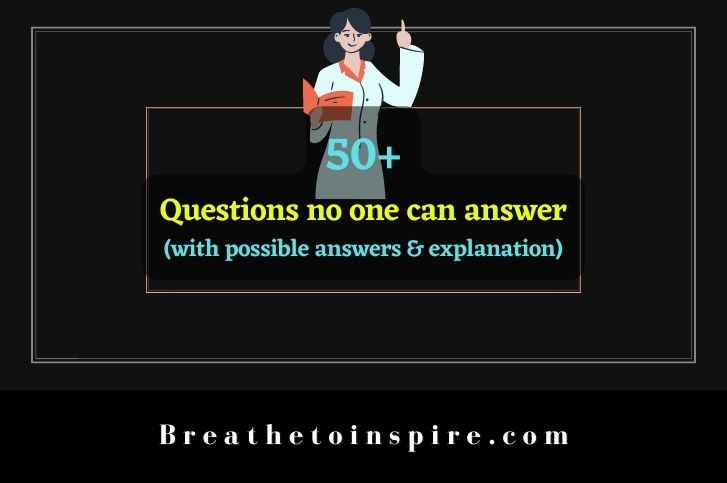 For as long as humans have been exploring the universe, we’ve continually uncovered more and more of its mysteries, and in turn, created more questions than answers.

These are so many questions no one can answer either philosophical or scientific or confusing questions that make no sense at all.

Some of them are the most puzzling unsolved mysteries in the world today that will likely never be solved due to their sheer complexity or lack of evidence, but that doesn’t make them any less fascinating.

In this article, let’s explore some of the most unanswerable questions about the universe and the life in general.

A few of these are funny, weird, serious and impossible questions that no one can answer.

I will provide some possible answers with explanations as per scientific research studies along with my personal views. Continue reading till the end and express your thoughts in the comment section.

50+ Questions no one can answer

1. Will the sun eventually explode?

This is a hard question to answer. But, the scientific community believes it will happen eventually. Scientists estimate that the sun is halfway through its main sequence lifespan.

According to NASA, after the sun has burned through most of the hydrogen in its core. In 5 billion years, it’s expected to expand into a red giant and start shrinking again until it becomes a white dwarf.

When the Sun starts becoming cooler, its outer layers may puff up again before they dissipate, forming what is called a planetary nebula.

2. Is there an afterlife?

Neither religion nor science can’t answer this question with certainty because there isn’t a definitive answer in the physical world. People’s thoughts and beliefs differ and what one person thinks might be wrong for someone else.

Also read: Questions that cannot be answered by science

3. Why is it happening whatever is happening now?

I think that question is probably something all humans struggle with, especially when they’re going through difficult times.

On one hand, you want to know what your future holds, on the other hand it may not be worth knowing because then you won’t be surprised.

So I guess we just have to keep living and try not to dwell too much on either end of the spectrum – whether it’s too much happiness or sadness.

That said, It is hard to know exactly why it is happening, whatever is happening now. These sorts of questions can only be answered by the universe itself.

Since we don’t know exactly what goes on inside a black hole, any information that’s around it gets lost once it crosses its edge, which is called event horizon.

So anything you send into a black hole, including light, will be gone forever. But if we find proof that time travel is possible then there could be a whole new set of possibilities when talking about what could go on at or near black holes.

Also read: 37 Questions that mess with your mind

5. Is there any other dimension beyond the third dimension?

Nonetheless, there is the mind-boggling possibility that there could be many more dimensions out there. As per string theory, one of the leading physics models of the past half century, there are 10 dimensions in the universe.

6. How deep does the ocean go?

The southern end of the Mariana Trench, which extends several hundred kilometers southwest of the U.S. territorial territory of Guam, is where the western Pacific Ocean’s deepest region, known as the Challenger Deep, is found.

7. Is space curved or flat, and why doesn’t everyone fall off the edge if it’s curved?

Under general relativity, space itself can curve, allowing the universe to take one of three forms: flat like a sheet of paper, closed like a sphere, or open like a saddle.

Despite its importance, astronomical geometry is not a trivial matter – it has a lasting effect on the fate of the cosmos.

Whether the universe will continue to expand forever or collapse, whether it’s finite or infinite – all of these questions have to do with its shape, according to Princeton University cosmologist David Spergel.

Space curvature has been proved by looking at gravitational waves coming from the collision of two black holes. But what actually causes gravity is still unknown and can’t be answered.

The simplest answer to this is, there is no absolute truth, even if it exists, as of now it is uncertain.

Truth can be subjective. We’ll never know what happened because everything that happened, whether it was a fact or fiction, had already occurred and there is no way to rewind time.

But we can’t stop asking the questions and there will always be new questions to ask because life is full of mysteries and contradictions that leaves us wondering what our true purpose in life.

9. What is our true purpose in life?

If there is a god, we can’t answer the question of what is his or her plan. Is life all about living happily ever after or just living day by day? What are our responsibilities as humans to save this planet? Why am I here anyway?

We don’t know why we’re here but maybe someday human consciousness or at least, science will find the answers.

However, the best we can do is to be content with life and be thankful that we are alive. All we can do is live in the moment and hope that things will work out.

Time is something beyond our understanding and anyone’s opinion, because time always continues to go on as per our perceived reality. However, Time might not exist, according to physicists and philosophers.

In the light of recent developments in physics, it seems plausible that time does not exist and suggests that we should take it seriously.

Scientists have tried their best to explain this phenomenon, but this is one of the questions no one can answer.

Although research suggests that space may not have always been that big, and today the universe is so big and empty because of its relentless expansion.

12. Will humans ever reach singularity?

Our understanding of the definition and possibilities of singularity may change over time and could lead to a discovery in how an AI would eventually overtake humans.

However, the director of engineering at Google, Ray Kurzweil, is one of the most confident experts predicted the singularity as a near-future event. We will reach it before 2045, according to this highly regarded futurist.

13. If ants can carry up to 50 times their own weight, how much would they be able to carry if they were human-sized ants instead of just little ones like they are now?

No one can answer such a question because no one has seen an ant as large as us yet.

The following are some questions that common people cannot answer and some of these questions cannot be answered by science too.

Simple questions no one can answer

Here is a list of easy questions no one can answer

4. Why do some animals have tails, some wings, and some neither?

5. Why can’t you taste things when you have a cold or allergies, or when you’re too old for wine to taste good anymore because your sense of taste has diminished with age?

6. Can owls turn their heads all the way around 360 degrees and see behind themselves?

7. Can dogs read your mind if they look deep into your eyes for a few seconds before sitting down next to you, wagging their tail enthusiastically, waiting for a scratch behind the ears?

Funny questions no one can answer

Here is a list of weird questions no one can answer funny:

1. Why do people say “bless you” everytime you sneeze?

2. How many people speak Spanish in Mexico City right now as I type this sentence out (because I don’t know)?

3. Do fish sleep underwater or on land?

4. Who lives at the North Pole?

6. Why does your heart beat?

7. Why are people scared of some spiders even though they’re not dangerous to humans?

8. Why do birds fly south for winter?

9. How does touching your toes help you get taller if it seems to just bring your feet closer to your head?

Hard questions that no one can answer

Here is a list of mind blowing hard questions that no one can answer:

1. How long will life exist on earth once we run out of fossil fuels to power everything like cars, planes, trains, boats, factories etc.?

2. How does gravity work?

4. What happens when you die?

5. Where did the Big Bang happen?

6. Why is there a North Pole and South Pole on our Earth while all other planets spin in a circle around their equator?

Best questions that one can answer

1. What are dreams made of?

2. How does water evaporate into vapor and become clouds, rain, and snow if it doesn’t have enough energy to break free from the surface of Earth or any other planet or moon?

3. How did Pluto lose its status as a planet?

4. What is dark matter made of?

5. Is infinity a number?

6. Why are there black holes in space that suck up everything around them including light?

7. What does lightning mean exactly and where does it come from when we see it during storms far away in the sky but never hear thunder with it here on Earth close by us?

8. What is the shape of the universe?

9. How many things are there on earth right now (not counting humans)?

10. Why are you alive today, but not yesterday or tomorrow or a hundred years ago or ten thousand years from now?

11. How fast does light travel through space from one end of our Milky Way Galaxy to the other end where Sagittarius A* resides at the center of a supermassive black hole that’s spinning at 100 miles per second but still hasn’t collapsed into itself yet even though it’s been doing that for millions of years?

Life questions no one can answer

Here is a list of trick life questions no one can answer:

4. How do I know if my life is meaningful?

5. What are some universal truths about life that transcend all religions and cultures, regardless of whether or not one believes in a higher power or afterlife–truths like loss, pain, suffering, beauty, kindness.

6. Why do bad things happen to good people and what can we learn from it–especially if it happens more than once in our lives.

7. How do I avoid regrets in my lifetime?