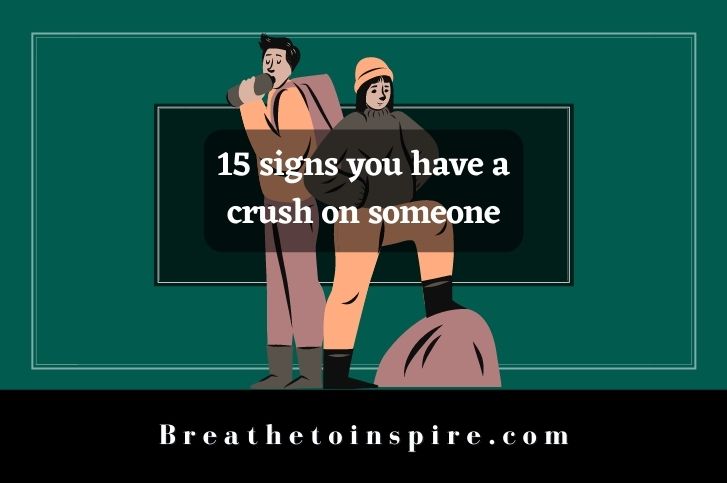 There are many ways to understand and describe crushes.

One classic definition is that a crush is “an attraction based on misplaced identification with an idealized other.”

In other words, we tend to choose the object of our crushes not because they’re perfect, but because we see them as the best version of ourselves.

In this article, let’s discuss different psychological and physiological signs you have a crush on someone, whether it’s a guy or a girl.

Also read: Why do we have crushes? (The science and psychology behind a crush)

If some of these feelings or behaviors seem familiar, it may be helpful to explore them further. Keep reading.

15 Signs you have a crush on someone

1. You feel an instant spiritual connection or a sense of a similar soul

It will happen instantly, and it’s a good way to tell if you’re really into the person or not.

The feeling will be so strong that it will almost seem weird, but don’t let that stop you from continuing with the relationship!

It’s like you’re soulmates. The feeling is so strong that no matter how hard you try to fight it, your feelings will always surface eventually.

2. Excitement at the sight of them

This is one of the most obvious signs you have a crush on a girl or a guy. When you see them, you feel excited and happy. You may feel energized and motivated to do something productive.

The sight of him or her can trigger your brain to release dopamine, which is responsible for pleasure, motivation, and reward-seeking behavior.

This is why you might find yourself smiling when you look at them or think about them when they are not around.

3. A desire to spend time with them and get to know them better

When you really like someone, it’s natural that you would want to spend more time with them and learn more about their personality.

It’s not necessarily about getting into a relationship with them right away – it’s just about spending time together in order to get to know each other better.

So that there will be no awkwardness later on if things do progress into something more serious down the road.

4. A desire for reciprocation of your feelings (even if this is not what you want)

This is perhaps one of the most obvious signs that someone has a crush on you — they will make it clear through their actions that they like you back.

It’s important not to confuse this with wanting something serious though — sometimes people just want attention from them.

If you are constantly hoping that they will return your feelings, or think that it would be nice if they did, then this could indicate that you have developed feelings for them.

5. A feeling that your crush’s opinion matters more than others’ opinions

You may not realize it but you’re probably subconsciously looking for signs that your crush likes you back.

If someone asks you for your opinion about something and you can’t stop thinking about it, there’s a chance it’s because you care what this person thinks of you and want to impress them with your knowledge and skills.

Some people are very good at hiding their feelings, but most of us aren’t. If you’re crushing on someone and don’t know it, then you’ll probably be more interested in what he or she thinks about things than you usually are.

You might spend hours obsessing over what he said about a movie or what she thought about your new haircut.

6. A sense of sharing everything with your crush

There is a certain sense of comfort that comes from sharing all those little things in life such as food, music, books, and movies with someone who has similar interests to yours.

You feel like this person understands all the little things about you that no one else does.

They might even have a unique perspective on things that allows them to see things in a way that no one else can!

When someone catches your eye romantically, it’s because there is something about them that makes you feel like they understand you in a way no one else does.

Your shared experiences are simply deeper, richer, and more meaningful when you’re together.

When you’re crushing on someone, there doesn’t seem to be anything that’s too personal or too private for them to know about your life.

You want them to know all about what makes you tick both inside and out.

Because they bring out the best parts of yourself when they’re around and because it feels good to share who you are with another person who cares about getting to know the real you better over time as well.

7. You miss them when they go away for short periods of time

There is nothing wrong with missing someone but if they haven’t left yet and you still miss them, it means that there is something more than just friendship behind your feelings for them.

This could mean that you like them and are afraid to admit it because of what others might think about it or maybe because of fear of rejection.

When two people share something in common, they can be drawn closer together.

It’s like finding a missing puzzle piece that fits into your life perfectly and makes everything else easier to understand!

Sometimes this happens because we tend to fall for people who look like our parents (even though we don’t realize it).

9. You feel they are your whole world

This is also one of the important signs you have a crush on a guy or a girl. You involuntarily feel they become the center of your world and everything seems to revolve around them.

This happens because they mean more to you than anyone else in the world, including family members and close friends.

Sometimes, people can become jealous or angry when they notice this behavior in their friend or loved one who has developed feelings for someone else.

However, if this person is right for them, then these negative emotions will disappear and they will simply want what’s best for their friend or loved one instead of trying to keep them from finding happiness elsewhere.

Also read: What does it mean to have a crush on someone?

10. You get butterflies around them

You get butterflies in your stomach when you think about him or her.

When someone we like enters the room, our nervous system kicks into high gear so we can interact with them more effectively — but sometimes our emotions go overboard and give us the jitters.

When this happens, we feel like our heart is beating out of control and we start sweating profusely as if we were running on a treadmill at full speed.

11. You think about them all day long (even when they’re not around)

You want to see the person all the time. You keep thinking about him or her, even when you’re trying to focus on something else.

You may even find yourself daydreaming about this person, imagining scenarios where he or she loves you back and lives happily ever after with you.

12. You want to spend more time together and do things together.

You don’t have much interest in other people anymore. Your crush has captured your attention so thoroughly that other people seem dull in comparison.

You don’t even think about dating anyone else because your mind is so preoccupied with thoughts of your crush!

13. You feel excited every time they text you

There is nothing worse than getting a text from someone and feeling like you’re going to vomit all over your phone from how excited you are.

If this happens when texting with someone new, then chances are you have a crush on them.

There is a huge difference between texting out of boredom and texting because you want to connect with them.

If you are feeling excited when they text, it’s a good sign that the feeling is mutual.

You can’t wait to see their name pop up on your phone, and you’re always thrilled when it does. The feeling of excitement is like no other, and it’s a great way to know if you have a crush on someone.

14. They make you feel confident and happy about yourself

You know when you’re really into someone when they can make you feel like the most confident person in the world just by being around them.

They make you feel, you want to be with them 24/7 because when they’re not around, something feels off and incomplete.

You’re more outgoing when they are around, and you feel like your best self when you’re with them.

This is another sign that you may have a crush on someone because their positive effect on your life makes it hard not to be attracted to them!

When we’re around people we like, we tend to feel better about ourselves because we know that they think highly of us as well.

This makes us want to be around them more often because we enjoy their presence so much.

If this person makes you feel good about yourself, then there’s a good chance that it’s more than just friendship at play here!

15. You want to be physically close to them at all times (hugs, hand holding, etc.)

If they’re not touching you at all times, then something is wrong with your relationship — or at least that’s what it feels like if there’s no physical contact between two people who are dating or in love with each other.

A good rule of thumb is that if there’s no physical contact (e.g., kissing) after a few months of dating, then it’s likely that one of two things has happened: either there’s some sort of major problem.

When you’re around this person, it’s impossible not to want to touch them or hold their hand, which is another sign that they might be all yours (or at least worth pursuing).

You might even get butterflies in your stomach every time they touch you or look into your eyes!

Being physically close to someone is one of the best ways to tell if there is chemistry between two people or not.

If this person makes your heart race or butterflies appear in your stomach when they touch or hug you, then there’s definitely something going on between

Regardless of the reason, crushes often leave individuals feeling like they’re in a trance-like state.

They might develop physical symptoms such as sweats, rapid heartbeat, and increased blood pressure while they’re talking to or thinking about their crush.

They also tend to obsess over their crush, which can lead to difficulty sleeping, eating, and focusing on work or other tasks at hand.

Each individual shows different signs depending on their psychological condition. However, most of these are common signs you have a crush on someone.