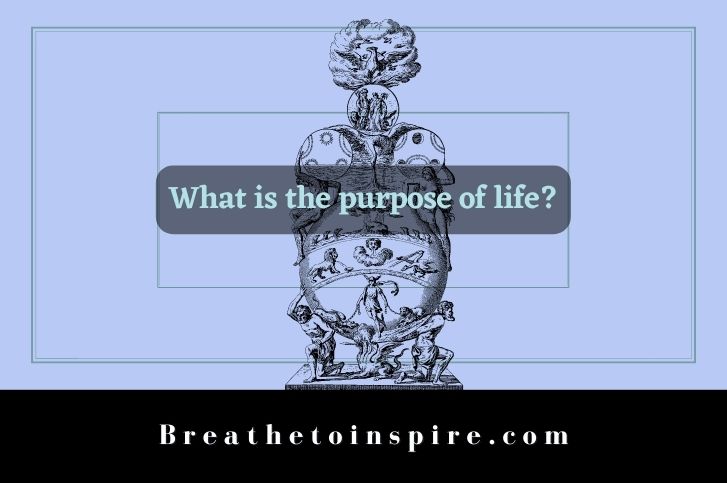 What is the purpose of life is a question that has troubled many great thinkers, philosophers, scientists, and religious thinkers, who have developed diverse theories about the role of humanity in the universe.

The Life purpose as we know it may be different for other creatures or even for extraterrestrial beings. It does not necessarily refer to just human existence, but rather to any form of existence, including non-living entities.

Contemplating wisdom from different cultures and religions can help us form our own conclusions about the meaning of life.

According to Greek philosopher Socrates, “An unexamined life is not worth living.” The idea here is that we should all strive to understand ourselves and those around us better in order to lead happier, more fulfilling lives.

This might seem like a pretty big task, but Socrates believed it was worth devoting your entire life to.

Socrates was not alone in his pursuit of self-discovery; he was just one of many great philosophers throughout history who believed that it was possible for humans to unlock the secrets of life itself through careful study and contemplation.

In the article, let’s examine different perspectives on what is the purpose of life.

What is the purpose of life?

What is life purpose? The question is as old as humanity itself. Why are we here? What is our purpose? But perhaps more importantly, how do we find it?

We can look at history for answers.

The first known expression of a purpose to life comes from the Epic of Gilgamesh, written in Mesopotamia around 2,000 B.C.

In it, Gilgamesh seeks immortality but learns that he must first conquer his own mortality. The story ends with him accepting death as a fact of life and becoming at peace with who he is and what his place in the world is.

Other ancient cultures had similar thoughts about life’s purpose. The ancient Greeks believed that all things had a telos — an end or goal toward which they were striving.

They believed that man’s telos was to live a virtuous life, one where he followed the path of moderation and reason rather than excess or emotionality.

This meant living according to reason and not allowing oneself to be overcome by emotion or vice — which they saw as “weakness” that led away from wisdom and virtue or vice versa towards corruption and evilness.

If someone asks you, “What is the purpose of your life?” This may seem like a silly question to some people, but it’s actually quite complicated to answer.

Moreover, there are many different answers to this question, but most people agree on some basic points. Many people believe that life has no meaning at all and that we just exist as part of the universe doing whatever we want to do while we can.

However, there are others who believe that there is a purpose for our existence and that it is our duty to find out what that purpose is.

Some people believe that our lives have no meaning at all; they believe that there is nothing more than the material world around us.

Other people believe that there may be something more than just this material world around us but they cannot prove it yet so we must simply wait until someone does prove it for us.

Still, others believe that there is a higher being or force in control of everything in this universe and he/she has given each person his/her own purpose for living out their lives here on Earth (or wherever you live).

Most people who believe in God or some sort of higher power would say that this higher being has given each human being their own unique purpose for living out their lives here on Earth.

Life evolved from non-living matter about 4 billion years ago.

Scientists have been trying to figure out what made complex, self-replicating molecules come together and start creating organisms ever since.

Recent evidence points to a chemical reaction called polymerization as one of evolution’s early driving forces.

Polymerization works by taking simple organic compounds and joining them with each other in chains, rings, or three-dimensional networks of shapes—depending on what chemicals are being joined together.

These formations can be seen in many naturally occurring phenomena including DNA.

In fact, DNA is nothing more than long chains of nucleotides joined together in specific ways—and life exists because certain polymerizations can replicate themselves.

But why does life want to replicate itself? The answer likely involves keeping up with competition between cells and species for limited food sources.

Without replication, any single organism will eventually run out of energy and die off.

Of course, if we take death into account, we realize there has to be some mechanism for disposing of old cells so they don’t continue to eat up valuable resources unnecessarily while providing no benefit whatsoever.

So what determines when an organism should live and when it should die? It turns out that a lot of environmental factors affect which living thing gets selected in nature.

All of these processes play a role in determining whether or not an individual lives or dies. They also tell us something about Earth’s history.

Since different forms of life succeed under different conditions, we know that conditions on Earth have changed dramatically over time, causing populations of different species to wax and wane as conditions change.

Keep in mind that all life experiences highs and lows naturally—not just living things but everything from civilizations to weather patterns go through ebbs and flows as time marches onward towards infinity.

So, how does all this relate to, what is the purpose of life? After all, if evolution favors reproduction, wouldn’t this imply everyone would get along better if their ultimate goal was to create more offspring?

Maybe. . . maybe not. It depends on whether or not survival of the fittest fits your definition of a good outcome.

Let’s look at some examples. Staying alive is certainly a good outcome, but what about happiness? We all seek to achieve happiness in life—but to what extent?

If I told you that doing whatever makes you happy—whatever provides maximum pleasure—would leave society worse off, would that discourage your pursuit of personal pleasures?

Or what if I told you that doing whatever makes society better—even if it didn’t help you personally at all—would lead to universal misery, leaving no one feeling fulfilled or satisfied.

Would you trade in all of your worldly goods for a guaranteed spot in hell?

So how do we resolve these apparent contradictions? The truth is, we can’t. or at least not without sacrificing one of our goals.

Our purpose in life might be to pursue whatever it makes us thrive and build a better future, but it’s also to survive—and in some cases, these goals might actually be incompatible.

This is a major reason for social strife throughout time and around the world.

So, the ultimate purpose of life is not to be discovered—it is unknown. Not only does it vary from person to person, but it can even vary within a single individual depending on his or her state of mind.

But fundamentally at least, in my opinion, the only purpose of life is death. Whether we accept it or not, we’re all heading straight towards the grave and the journey between life and death is pretty uncertain.

So, no matter wherever you are in this so-called journey just take a moment, be calm and be grateful that you are fully alive, and keep going.

Here are some quotes on the purpose of life:

“Sooner or later in this journey, every traveler faces the same question: Are you a human intending to be a god, or a god pretending to be human?”

“Awareness is the power that is concealed within the present moment. … The ultimate purpose of human existence, which is to say, your purpose, is to bring that power into this world.”

“The purpose of life is not to be happy. It is to be useful, to be honorable, to be compassionate, to have it make some difference that you have lived and lived well.”

“The purpose of life is to live it.”

“You were ordered to obey to Allah, and you were create to perform good deeds.”

“To think what is true, to sense what is beautiful and to want what is good, hereby the spirit finds purpose of a life in reason.”

“Most men have no purpose but to exist, Abraham; to pass quietly through history as minor characters upon a stage they cannot even see. To be the playthings of tyrants. But you…you were born to fight tyranny.”

Also read: 22 Philosophical and wise quotes on suffering in life

We are all here to live our lives to the fullest, experience love, and be happy. We are also here to make a difference in this world by adding value to it.

Our purpose in life is to be happy and make others happy. We can achieve this by following our passions and dreams, helping people around us, and making their lives better.

We all have dreams that we want to achieve in our lifetime. These are the things that will make us happy.

But we need to realize that happiness does not come from outside sources but from within ourselves. If we are not happy with our current situation then we must change it so that we can achieve happiness.

By changing your environment you will be able to change your perspective about life and thus lead a happier lifestyle.