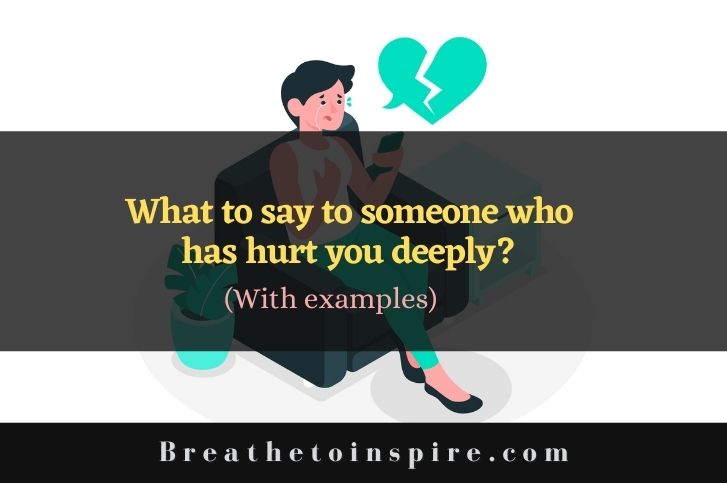 Recommended read for you: 15 Situations when someone you love hurts you deeply. (Your guide to deal with them)

What to do when someone hurts you emotionally and also hurts your feelings deeply?

The answer to the question of what to do when someone hurts you emotionally depends on several factors. First, it’s important to understand why you felt the way you did.

Was the person’s behavior truly abusive, or was it just misguided?

Did you misunderstand what the behavior meant?

Did you misinterpret their compliment?

Or did the person simply not care about your feelings?

It’s also important to consider the nature of the hurt. Did they hurt your ego, self-respect? Was it a physical and emotional wound, or did you suffer a financial or professional loss?

When you find yourself tempted to say, “Just forget it,” remember that it’s the hurt that’s important. Talking about your feelings with the person who hurt you may not heal the wound, but it might help you to understand the core of the problem and reduce your stress.

Although, it’s never easy talking to someone who has hurt you deeply. Yet, there are times when you need to.

But, at some point, you will have to talk to that person again. And you will need to be brave enough to ask that person what’s the reason behind their toxic behavior, at least to clear that whether your own actions made them hurt you.

In general, having a girlfriend or boyfriend is a great thing, but when a relationship starts to go wrong, it isn’t.

The relationship that you have with your boyfriend, girlfriend, or spouse can become difficult when one person is hurt or upset. You need to learn how to communicate with this person and work through the problems.

If you want your person back you need to tell him/her that you are willing to do whatever it takes to make the relationship work.

Here are some ways you can communicate with someone you love who has hurt your feelings:

A heart-to-heart communication with someone who has hurt you deeply can turn out to be a disaster or a healing experience.

It’s a difficult conversation to have, but it’s necessary. When someone you care about hurts you deeply, it can require a great deal of courage to ask that person how he or she feels.

Yet that courage is well worth it. Because no matter how difficult the conversation is, hearing how someone feels about things can go a long way toward healing the wounds that the relationship has caused.

Before you talk to someone who has hurt you, here are three things to keep in mind:

1. You are not to blame yourself for the other person’s actions.

2. You are not responsible for how the other person feels.

What to say to someone who has hurt you deeply?

In a relationship, it can be difficult to admit that a partner (or spouse) is hurting you emotionally. It’s easier to pretend everything is fine, or hope that the other person will change.

Unfortunately, being in denial about the realities of your relationship won’t make it better. In fact, ignoring a problem or suffering in silence only makes it worse.

When your partner hurts your feelings, don’t react immediately. Depending on how emotional it makes you feel, you may take a deep breath, count to ten, or walk away.

When you’re ready to talk, avoid making accusations, saying “You’re …” or “You’re always …” Instead, try saying, “I feel hurt when you …” or “I feel angry when you …”

When you express your feelings, your partner may react with anger or criticism. If this happens, don’t back down. Instead, respond with empathy, saying something like, “I’m sorry you feel that way.”

Don’t bring up past hurt, and don’t blame your partner for the hurt you’re feeling today. Be direct, saying, “You hurt me when you …” or “I hurt when you …”

Even though it’s painful, it’s critical to be honest about your feelings. Often, a spouse or partner will react by apologizing, either by words or by actions. Just accept that apology, but don’t accept their excuses or rationalizations, and don’t make promises to change in the future.

If your partner refuses to acknowledge or apologize for hurting you, you need to be firm. State your feelings calmly, and tell your partner that you aren’t going to accept being hurt.

If your partner does apologize, don’t make it worse. Just be understanding that we’re all humans, we all make mistakes but also we’re capable of realizing them and working on them. So, just forgive and forget. After he/she is the person you love most.

Best ways to communicate with someone who has hurt you deeply.

There’s no perfect way to respond to a situation in which you’ve hurt or disappointed someone. But at the very least, make sure you’re saying the right thing.

Sometimes that’s as simple as showing some remorse for how your behavior affected another person. But other times, you may discover that the person who’s hurt you is suffering from some deeper psychological issues. In that case, you’ll need to address more than just your words.

It’s tough when someone you love has hurt you deeply. When a friend who used to be close suddenly turns on you, it’s easy to feel hurt and betrayed. And you can accidentally hurt people without even realizing it.

“You’ve hurt my feelings.” “You’re so thoughtless.” “I can’t believe you said that.” These phrases may sound gentle, but they can be unsettling or even insulting.

“Why did you hurt me?” is a good place to start. Many people don’t like this question, or the implied accusation that they’re doing something to hurt others. But it’s important to be able to express your hurt feelings to someone who hurt you.

“What you want to accomplish by hurting me?” is even more important. If you understand the motivation behind a hurtful action, you’re in a better position to respond appropriately.

For example, if you understand why your friend is suddenly angry, you may be able to calm her down with a gentle explanation. “I can see you’re upset with me right now,” you might say. “What’s going on? Did you say something I shouldn’t have?”

“I just told you the truth. It was a simple statement of fact. It hurt me when you made it, and I’m sorry. But I can’t change the truth.”

No one is perfect, and it’s normal for friends to disagree from time to time. But it’s important to be able to express your feelings without insulting the other person. It makes you a better person.

Chances are, this person isn’t looking for advice. Many people who hurt others do so out of their own pain — not because they want to be punished. That said, don’t be surprised if they try to turn the conversation into a lesson.

When someone hurts you emotionally, you really want to hurt them back, and you desperately want them to change. But all too often, you’re handed an “I don’t care” response.

You end up feeling like you’re wasting your time arguing with them, because no matter what you say, they won’t listen. But that’s the worst thing you can do.

When you give up on someone, you give up hope. You give up caring. You give up trying to win them back. But you don’t have to give up.
Here are seven things you can say to someone who hurt you deeply:

Now, compassion doesn’t mean you have to jump into every relationship, but you must be willing to put yourself in the other person’s shoes.

3. Be direct. Express how you feel, and state what you’ve lost.

Taking the time to say something to someone who has hurt your feelings can be difficult. However, expressing your hurt feelings can be one of the most important things you can do.

While everyone’s hurt feelings are different, here are some tips, if you don’t know what to say to someone who has hurt you deeply:

Be direct – When you show your pain, you show that you care. This can make it less likely that they’ll hurt your feelings again.
Say “sorry.” Apologizing lets them know that what they did hurt your feelings, and that it’s wrong. Even “I’m sorry you feel that way” works, because it doesn’t indicate anger, and shows respect for their feelings.

Be specific – Instead of saying “you hurt my feelings,” say exactly what they did that caused you hurt feelings.

Be real – Don’t make up stories or try to justify what happened. Apologize for things you actually said or did, and show that you understand how they hurt you.

Show remorse – If they’ve hurt your feelings, let them know that you understand why. Sometimes a simple “I’m sorry” isn’t enough — you may need to say, “I’m sorry you feel that way” more than once.

Be supportive – Offer to give them a second chance if they change.

Don’t get defensive – Showing that you understand their feelings doesn’t mean agreeing with them.

Don’t try to justify your actions – If you’ve hurt their feelings, then you’ve acknowledged that what you did was hurtful, and there’s nothing more you can say.

Don’t criticize – Saying “you shouldn’t feel that way” is an attack, and they’re not likely to listen.

5. Listen. Let the other person talk

If someone hurt you and you feel angry, frustrated or hurt, it can be tempting to lash out. But it’s far better to let the other person vent first.
Once you’ve heard them out, you can respond in kind.

One of the most painful experiences in life is having a relationship with someone who hurts you, and you want that person to go away. Perhaps you don’t believe all the accusations, and you’re also hurt because you believe the person truly cares about you.

It’s tempting, especially when you’re in a bad mood, to bring up some ancient history and remind the other person of all the ways they’ve hurt you, but this isn’t helpful. Even if the other person does something awful, you can’t expect to never be hurt by them again. You may never get

Though you may want to get right to the nitty-gritty, research shows that bringing up the past only strengthens negative feelings.

If you keep your head pointed toward the future, you can work toward making those things happen. Though the person won’t be part of your life forever, that doesn’t mean that you’ll be alone forever.

When you’ve forgiven someone, you’re letting them off the hook for their behavior, and you’re also giving them permission to move on. This doesn’t mean you’re excusing bad behavior. It means you no longer hold a grudge.

When you forgive someone who hurt you, you’re removing all the negative energy you’re holding on to, and you’re moving forward with your life.

If you have been through a painful past relationship and the other person is no longer in your life, you might be left feeling as though nothing you do or say will make a difference. But by taking the time to articulate your feelings and process what happened, you can transform your relationship with this person.

What to say to someone who has hurt you deeply?
0 shares