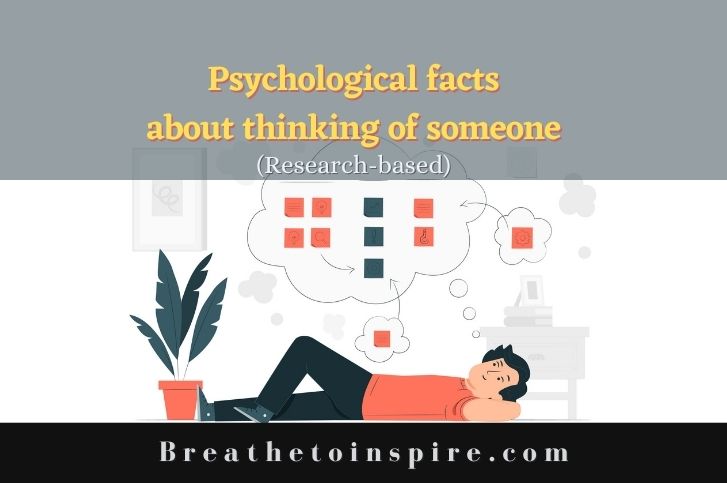 Human psychology is a very complex thing. It is a combination of personality, culture, experiences, and emotions, which together work in a way that makes each individual’s mind unique.

Because of it, two people may react completely differently to almost identical stimuli. The same applies to situations where you are trying to think about someone.

Although we believe we all behave similarly when we miss our loved ones, there is an element of irrationality involved in it.

That’s why we have to take different psychological factors into account when analyzing how exactly do we think about an ex-partner or friend who has left us and how can we deal with such an emotional state.

Understanding these factors might help us avoid emotional pain, at least to some extent.

There are some general psychological facts about thinking of someone else. These can be very effective in helping people understand what people think and how the human psyche works.

Also, they guide you to communicate with people once if you know what you are thinking about someone and how accurate your thoughts align with your assumptions.

Here is the list of psychological facts about thinking about someone.

Psychological facts about thinking of someone

Thinking about another’s perspective does not enhance our capacity to judge how another person thinks or feels.

A study found no evidence that the cognitive effort of imagining oneself in another person’s shoes, studied so widely in the psychological literature, increases a person’s ability to accurately understand another’s mind.

In a series of experiments, researchers found no evidence that imagining oneself in someone else’s shoes increases a person’s ability to accurately understand how the other person feels.

The study looked at a wide range of psychological literature and found that such thinking does not improve the ability to understand another’s mind.

In fact, perspective-taking decreased accuracy overall, while occasionally increasing confidence in judgment, according to researchers.

When we imagine another person’s perspective, we might feel like we’re making better judgments. Nevertheless, it doesn’t actually make us better at judging how someone feels or thinks.

The results did not differ by gender. The majority of men and women are not able to put themselves in another’s shoes very well when trying to guess their perspective.

Even when their insights were incorrect, they had an increased sense of self-confidence in their predictions.

Understanding the mind of another requires perspective getting, not perspective-taking.

Fortunately, the same research has found a simple, practical way to improve our ability to understand someone else’s thoughts more accurately.

When people are given the chance to talk to a person about their opinion before making predictions about that person, they are substantially more accurate in predicting how they might feel than those who are told to take another person’s perspective or given no information.

Researchers call this technique “perspective getting” as opposed to perspective-taking.

The studies finally suggest that perspective getting allows gaining new information rather than utilizing existing, sometimes biased, information about another person. So, in order to understand what others think or prefer—don’t guess, ask them directly.

Recommended reading for you: Psychological facts about soulmates (Research-based)

Thinking of someone you love (partner) while listening to love songs can intensify emotions and enhance psychophysiological responses.

In new research, love isn’t defined as a single emotion as before, but rather as a mix of fast-moving feelings that have different meanings depending on the individual’s experiences and personality.

Recently, neuroscientists have concentrated their research on its neural bases in an attempt to determine how various emotions combine to form love.

They found that romantic love activates specific brain regions, some of which are also activated during sexual arousal and in the reward system.

They used a model called the “love induction task” At the time of the experiment, the thermal imprints of forty-four people in love, relationships, or both, were also recorded.

Thermographic data were collected on six regions of the interest-the tip of the nose, the upper nose, and the peripheral region. Subjects were randomly assigned to two conditions – love or control.

For the first task, participants were first asked to think about their partners, then continue doing this while listening to a song about their relationships.

Also read: 21 Psychological tricks to get someone to like you

In the second, they were asked to think about someone else’s relationship and to keep doing this while listening to a song with positive content, but which was unknown to them.

In addition, the data showed that music produced a much more intense peripheral response.

Listening to the love song while thinking about their partners resulted in higher peripheral (nose temperature) and subjective responses than listening to the unknown happy song.

As a result, it could suggest that while the positive-content song induces positive emotions, the effects of the love song are much more intense.

Thinking of someone you love can reduce your need to reconnect through anthropomorphism.

According to a new study, reminding the people you love or care about can reduce your tendency to anthropomorphize objects out of a sense of social connectedness.

If you don’t know what anthropomorphism is, it means treating or perceiving non-humans such as animals, objects, or divine supernatural beings as if they are human in appearance, character, or behavior.

At some point during our lives, almost all of us will feel lonely. The feeling may be permanent or temporary. It’s natural for us to feel disconnected from others.

A 2008 study led by psychology researcher Nicholas Epley and colleagues showed that people may try to feel connected by anthropomorphizing inanimate objects, such as pillows or alarm clocks, to help them feel more connected.

The research team conducted an experimental study online with 178 participants, who completed established questionnaires designed to assess attachment anxiety and avoidance, loneliness, self-esteem, and the emotional need to belong.

Participants in both groups were then asked to read descriptions of four gadgets, including an alarm clock that rolls off your nightstand when the alarm goes off, and they rated the objects based on social and nonsocial attributes.

Significantly, the results showed that participants thinking about someone they were close to were less likely to anthropomorphize the objects compared with participants who thought about an acquaintance.

The participants who reported feeling lonely were more likely to associate the gadgets with human characteristics than were non-lonely participants.

Furthermore, they found that attachment anxiety was associated with anthropomorphizing more than loneliness.

Research like this one highlights how important feeling connected to others is to people. It illustrates how far people go to feel connected when they feel isolated, and it reminds us of the value of our close relationships.

Also read: 10 Psychological reasons behind why you can’t stop thinking about someone.