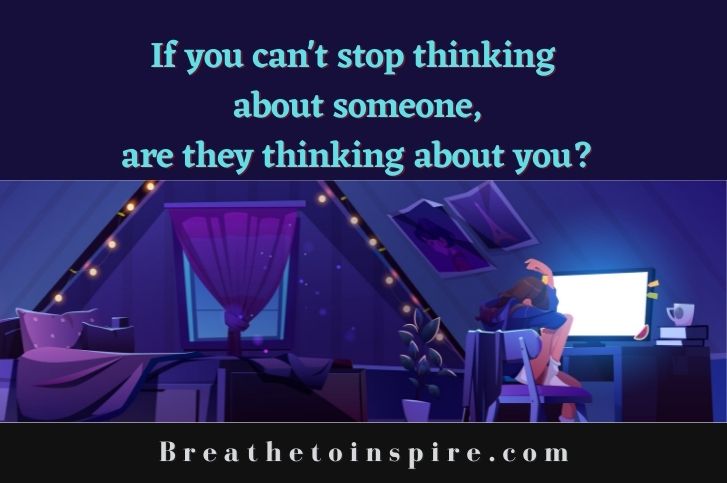 recommended reading for you: Psychological facts about thinking of someone.

If I can’t get someone off my mind are they thinking about me? This question is not easy to answer, because there is no clear scientific evidence as thoughts are very complex and science is still in its early stage to discover more about the human psyche.

Most people think and mind wondering about all unrelated things all the time, and they think about other people, too. But it’s certain to say that thinking about someone — even just for a few seconds — means that person is thinking about you.

What does it mean when you can’t stop thinking about someone?

What does it mean when you can’t get someone off your mind? According to psychology, when you can’t stop thinking about someone – if the nature of your obsession is constantly thinking about the person you love or intimately related to, then it means that you are dealing with attachment anxiety, loneliness, self-esteem, need to belong and heightened sensitivity to social cues of rejection.

According to new research, love isn’t defined as a single emotion as before, but rather as a mix of fast-moving feelings that have different meanings depending on the individual’s experiences and personality.

Recently, neuroscientists have concentrated their research on its neural bases in an attempt to determine how various emotions combine to form love.

They found that romantic love activates specific brain regions, some of which are also activated during sexual arousal and in the reward system.

It simply means then your thoughts and emotions are more intense to the person you are deeply attached to or in love with. But less intense to your friends, acquaintances, and family.

If someone is on your mind are you on theirs: psychology

In reality, someone who is emotionally attached to you is often thinking about you, too. In fact, they may be thinking about you constantly but only if your feelings are mutual and you shared a deep relationship before.

So, when someone can’t stop thinking about you, it’s a sign that they are interested in you and also you are on their mind all the time.

Why You Can’t Stop Thinking About Someone?

Mind drifting (or mental wandering, wandering mind, daydreaming, etc.) is a cognitive phenomenon in the brain wherein one’s attention becomes distracted from the task at hand and strays into unrelated thoughts

Why do I keep thinking about someone from my past?

Researchers have found that cognitive drifting is more prevalent among people who have developed emotional attachments to people, and who tend to have stronger memories about people.

For example, psychologists have found that people who have experienced trauma are more likely to drift toward memories of traumatic events.

These researchers also found that people who drift toward memories of a person’s past are likely to behave very intensely and this can help strengthen emotional bonds.

People also tend to keep thinking of people they admire, because it helps them feel closer to that person. For instance, thinking about your crush or favorite role model can trigger mind wandering because it makes the admired person seem almost perfect one ever existed.

So, you keep thinking about someone from your past because

1. The person you keep thinking about either caused you extreme trauma in the past or created extreme joy in your life.

2. You are not thinking about the person but you are missing those moments you had spent with him/her.

3. You keep thinking about that person because you are emotionally attached and so far you haven’t found any better person than him/her.

4. You have a fear of connecting with new people that’s the reason you keep thinking about some from the past and want to seek your past relationship because you are familiar and feel comfortable with that person.

What does it mean when you can’t stop thinking about someone you barely know?

Cognitive drifting can also happen among people who don’t know the person they’re drawn toward, but who share similar traits with the drifting person.

Psychology Professor Dr. Julianne Holt-Lunstad conducted a study asking subjects to think of someone they were attracted to. Then, she measured brain activity using functional magnetic resonance imaging (fMRI) to see if those subjects’ brains responded to the object of their affection.

What she found was that, as subjects were thinking about the object of their affection, their heart rates spiked. The brain’s response to the object was so strong that Holt-Lunstad was able to detect the heart activity.

Holt-Lunstad wasn’t surprised. Research indicates that our biological responses are triggered when we think about something, no matter what it is. The desire we feel for someone is biologically based.

Of course, there’s always the possibility that the person you’re talking to doesn’t think about you at all. He or she might be caught up in the moment and unable to focus on you. There could also be another explanation for her behavior.

Even if you can’t stop thinking about someone, it doesn’t necessarily mean that he or she thinks about you. For the vast majority of people, thinking about people is a way of making social connections — it’s how we make friendships. That’s why people do think a lot about their friends or close relationships.

When someone is heavily on your mind?

Someone is heavily on your mind when you are so preoccupied by another person. Sometimes you don’t even recognize it as the mind wandering happens subconsciously because of your unhealthy attachment style.

That kind of obsession is relatively rare, but it happens. “It’s also possible for someone who’s obsessed with you to have thoughts about you that aren’t positive,” Dr. Farley says. “For example, he or she may think, ‘I hope she doesn’t think of me like that!’”

Of course, there are all kinds of ways to think about someone, even if you can’t stop thinking about them. Maybe the person reminds you of someone you used to be close to, or maybe you’re motivated by their bad qualities.

Not necessarily. Opposites do attract, but most of us are far more attracted to those who are similar to us than we are to people are wildly different.

This may be because our brains seek comfort and familiarity. Given that, it makes perfect sense that if my brain is thinking about someone romantically, it’s going to seek to identify that person as similar to me. And I’ve got plenty of built-in cues for how to do this.

For example, if we like someone, we’ll spend time trying to understand how they think and process information. We pay attention to the details of their appearance, their speech, and the way they hold themselves.

But just because someone is “like you” doesn’t mean they’re “your type.” Indeed, what makes someone attractive isn’t necessarily how similar they are to us but rather how dissimilar they are from the average man or woman.

This may be why so many people are obsessed with finding their ‘soul mate.’ Dating someone with similar tastes and values to our own is comforting, but dating someone very different can make us feel like we have something to offer. And, as we all know, variety is the spice of life.

So if you’re having trouble finding someone who’s similar to you, try to expand your horizons.

What to do when you can’t stop thinking about someone?

As per a study, there is no evidence that imagining oneself in another person’s shoes increases one’s ability to understand another’s thoughts.

In a series of experiments, researchers determined that putting oneself in another’s shoes did not help a person understand how the other feels more accurately. In a review of a wide range of psychological literature, it was found that such thinking does not improve understanding another’s mind.

When we imagine another person’s perspective, we might feel like we’re making better judgments. However, this does not directly improve our ability to recognize how someone feels or thinks.

The results did not differ based on gender. It is very difficult for most men and women to put themselves in another’s shoes when trying to guess their perspective. Even when their insights were incorrect, they kept a sense of self-confidence in their predictions.

So, if you don’t know what to do if you can’t get someone out of your head, then my advice to you is, either stop thinking about someone constantly or bring courage to yourself and approach them by expressing your thoughts and feelings for them.

Only this way, you can bridge the gap between both of your interpretations and put an end to your anxiety.

How to stop thinking about someone?

Here are some helpful tips you need to do if you can’t stop thinking about someone.

1. Don’t assume, your thoughts are not actual facts. Keep that in mind always.

2. Talk to the person directly so that most of your assumptions will become clear. And you can have a better understanding of the true situation.

If they have similar thoughts or feelings for you then plan for a series of dates to know each other better. Otherwise walk away from them permanently.

3. Divert your mind by focusing on the things you value and the people you care about. Especially take care of your body, mind, and health. Focus on your life and become better at your perspectives.

So that similar-minded people eventually encounter in your life, if you keep improving yourself.

4. Be optimistic about the future. Just realize that time is a very crucial and limited resource anyone can have. The time you just simply wasted thinking of someone you can’t have will not serve you at all. So, instead of making yourself stuck in the past, think about a better future. And use your time wisely.

5. Take some help from your friends, family, or an expert to deal with the issues. If your thoughts are very obsessive and completely destructive then they will cause you serious mental health issues.

Recognize your kind attachment very soon and receive some help from professionals. That way they will guide you to stop thinking about someone you can’t have.

Recommended reading for you: What does it mean when you can’t stop thinking about someone you barely know?