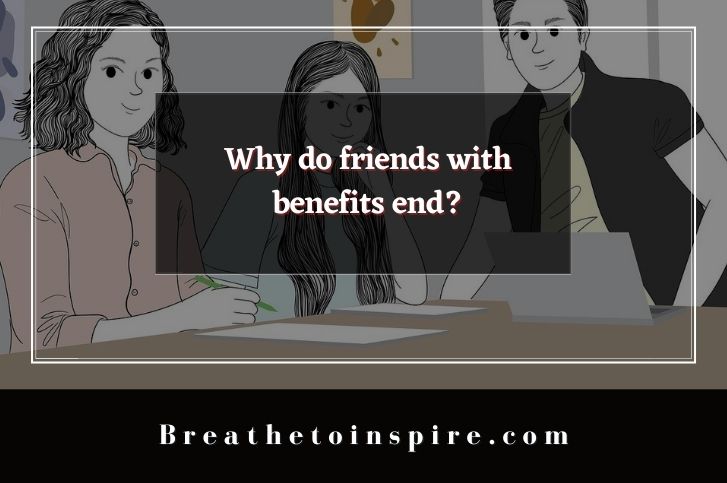 Having a fwb is different than having a friend—it’s more than two people hanging out and hooking up. For some, it’s a part of an ongoing s#x-only relationship.

A study published in The Journal of S#x Research suggests that between 40 and 50 percent of young men and women have had one.

Why? When it comes to casual relationships, especially when they involve s#x, there are no hard-and-fast rules for ending them, which can make things complicated.

What if you don’t feel like you want to see your fwb as often anymore? How do you know when or if it’s time to end things? Is breaking up easier said than done?

Sure, breaking up may be simple when you’re talking about what most consider a traditional romantic relationship; but why do fwb end? trying to navigate friendship dynamics (especially s#xual ones) can get tricky fast. Let’s discuss more in this simple guide.

Why do FWB end?

I’d say that most FWBs end when one or both partners realize they want something more serious out of a relationship – which is completely normal.

Over time, if either or both of you get attached, things could get messy. When both people involved have their own set of emotions and feelings, drama can easily arise.

People who enter into a FWB don’t always communicate well enough to work out potential problems before they become major issues and that can really tear apart an FWB. And there are also times when one person develops feelings for someone else or just falls out of love.

Also read: How to turn friends with benefits into a relationship?

But even though FWBs aren’t always a good idea for everyone – some people actually thrive in them! When used as intended (as no-strings-attached relationships) then having several FWBs at once is often a positive experience for many individuals.

The key here is to make sure not to let yourself develop any strong feelings for your FWB and that you keep communication open. Whether it’s s#x only or something more, communicating your needs from both perspectives will allow everyone involved to get what they want.

And on top of all that, remember: FWBs are bad because we believe it so. Unless it works for everyone involved, it’s never recommended that anyone jumps headfirst into a FWB relationship – especially when considering how hurtful some breakups can be.

You might have heard countless stories about partners getting emotionally attached and feeling betrayed by their partner after discovering he/she has been seeing multiple people without protection – which goes against what was originally agreed upon. Don’t let these situations happen to you.

Also read: How to be friends with benefits without catching feelings?

20 Reasons why do friends with benefits relationships end

In order to have a successful and fun FWBs relationship, both parties must remain emotionally detached from one another. They shouldn’t let their emotions get in the way or risk ruining everything between them two.

This doesn’t mean that they don’t want to hurt your feelings on purpose; it just means they know how it feels and don’t want things to get too complicated because of something so silly as a friend-with-benefits relationship.

3. One party has no interest in s#x without emotional attachment:

While some people prefer just having pure s#xual relationships without any kind of emotional attachments involved, some others do not feel comfortable with it.

4. One party has been recently hurt or cheated on by their partner:

It’s understandable if someone is hesitant about getting into a FWBs situation after having just been cheated on or hurt really badly by someone else – especially since everyone wants to make sure that what happened to them previously does not happen again.

Any kind of relationship that deals with toxicity has to face the consequence of its nature. Friends with benefits has no exceptions.

Also read: Why friends with benefits is bad?

If one person shows toxic behavior and torture his/her fwb partner for their selfish reasons. Then definitely FWB relationships come to an end.

Some people find it easier to approach situations like these when they have nothing invested; when all they lose is time.

For example, approaching someone at a bar who looks interested is one thing, but asking out your best friend who you’ve always admired might require some extra courage.

Sometimes individuals enter into FWBs relationships because they are not quite sure where they stand on their s#xuality.

Again, it’s perfectly fine to explore your s#xuality and see if you are indeed attracted to members of your own gender. But there’s nothing wrong with taking a step back to figure things out first.

8. Nobody wants pressure or expectations:

Everybody hates being told what to do – even by themselves. When entering into a FWB arrangement, nobody should expect anything from one another; nobody should tell each other what they should do , nor force each other to conform to certain requirements.

Of course trust is important in every healthy relationship, regardless of whether it’s short-term or long-term. In a friend-with-benefits relationship, however, both parties may worry that they will be used in one way or another. Nobody wants to feel vulnerable only to end up getting hurt later

10. Only one party is committed:

Having a chat with your current partner to discuss your thoughts on starting a FWBs agreement is often necessary. Each person’s commitment level needs to match up in order for such an agreement to work out.

Having clear cut rules makes everyone happier  in a FWBs relationship. Without established boundaries, it’s common for one party to start feeling used or taken advantage of

Similar to uncertainty about their s#xuality, some people enter into FWBs situations due to uncertainty in regards to their feelings for another person.

Similar to fear of rejection, if someone is scared to bring up their feelings and desires, then perhaps they are not yet ready for a FWBs relationship.

Maybe one person communicates more openly than the other; maybe talking about certain topics makes either individual uncomfortable. Miscommunication is probably every couple’s worst nightmare.

It causes anger, resentment, stress and anxiety among partners. All of which lead to them becoming miserable in their s#xual lives.

To avoid it, you need to make sure both of you are on the same page about what exactly your friendship entails before anything s#xual takes place between you two – especially if one of you wants things more serious while another prefers a fling.

If miscommunication arises , then learn how to talk about it without losing your cool.

15. Not knowing when it works anymore:

Not every couple knows exactly what signals indicate that it is working anymore – not only s#xually, but also romantically.

A good sign would be when one person feels so comfortable around his or her partner, that they don’t feel like there is a need for any sort of communication because they know each other well enough to read each other ‘s minds.

That said, it would be naive to assume that there will never come a time when something needs further discussion. In such situations, it helps when both parties understand how an argument can ruin intimacy – and do whatever they can to prevent those kinds of situations from happening.

Different expectations are common in FWBs relationships because neither party expects much beyond physical pleasure.

They’re relaxed with each other and have no problem laughing at or making fun of themselves. This allows them to remain laid back , open-minded and willing to try new things.

17. Lack of respect and trust:

Another common problem found in FWB scenarios is lack of respect and trust between both parties. In order for anyone to successfully have an FWB relationship , he/she needs absolute trust in their partner.

Relationships (and friendships) fall apart because people can’t trust each other enough to tell them stuff freely. When that trust disappears , then everything falls apart too – including s#x.

Having an adult friendship with someone who has deep-rooted issues is likely to create problems in general regardless of whether it’s a friendship or a FWB situation.

You can try your best to be understanding and nice all you want, but some people simply cannot change even after they’ve seen first hand what damage their behavior is causing others’ lives.

Going into a FWBs relationship as revenge against somebody else puts unnecessary pressure on yourself and your friend.

As long as you keep that relationship confined to being a simple, casual affair , and do not let it mess with other aspects of your life, it should turn out fine.

However, many couples choose to get into a FWB relationship when they themselves are going through a tough patch in their relationship.

While these types of relationships may temporarily distract both partners from dealing with any underlying issues in their main relationship , they can sometimes work to solidify marital troubles.

S#x and dating are subjects that sometimes require an individual to reveal bits of information about himself or herself.

For example, if you decide that you want to experiment with both s#xes, then it’s not unreasonable for you to expect your girlfriend/boyfriend to be supportive of your decision.

Similarly, experimenting with one’s s#xual preferences is entirely a personal matter – and should not become a means of pressuring your partner into doing something that they are not entirely comfortable with.

On similar lines, telling each other about things like emotional affairs can sometimes force your relationship partners into taking sides. Such decisions need careful thinking over rather than arbitrary arguments.

In conclusion, FWBs aren’t necessarily a bad idea – they just aren’t for everyone. It’s important that you think over your decision carefully before entering into any sort of romantic or s#xual relationship.

And even if you do decide to engage in them , always use protection and communicate well with your partner(s).

FWBs are just not right for many people but that doesn’t mean it wouldn’t be a good fit for you. If nothing else, remember: no matter what – it’s never okay to pressure anyone into doing something they don’t want to do.

Don’t ever take advantage of someone else who has feelings for you or try making someone feel guilty about saying no.