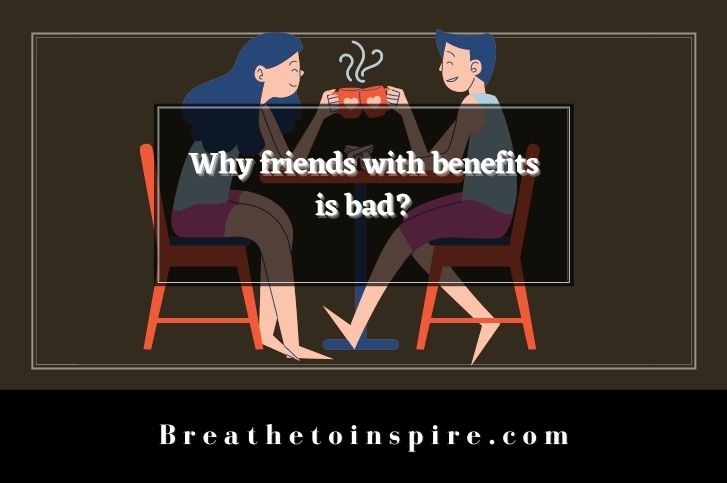 Friends with benefits is a type of relationship. Most often short-term (but not always), physical relationships between friends or acquaintances where participants are free to see other people and are usually available for spontaneous and casual fl#ng.

On one hand, it would seem easier than most other relationship types since you already know and trust each other, but on another hand, it’s much more complicated than a simple friendship.

Even if you think that you can handle your feelings after ending your friends with benefits-relationship, most likely you will fail if you actually try to do it.

Being with friends with benefits relationships can be really good, but it’s also really bad.

One of the reasons why friends with benefits is bad is, if one person is using another, whether or not they are aware of it, there will eventually be a huge problem that needs to be addressed.

Using someone for his or her body and knowing that you have no intentions of following through on your commitment by becoming lovers is wrong.

On top of that, jumping into bed with someone you barely know isn’t smart at all.

Be careful when approaching a friend who you think could benefit from being friends only because their feelings might get hurt if they’re truly interested in pursuing something more serious.

Here are some things you should know why friends with benefits is bad.

Why friends with benefits is bad?

The reasons why FWBs aren’t always a good idea are fairly straightforward. First of all, FWBs might not be able to satisfy your emotional needs because you’re not supposed to have any sort of feelings for them.

You should never feel pressured into doing anything you don’t want to do and if you suddenly find yourself becoming more emotionally attached then it’s time for things to come to an end.

Also read: What are friends with benefits?

On top of that, FWBs are supposed to be no-strings-attached relationships so they aren’t really made for anyone looking for a committed relationship or someone serious in their life – even just as a friend.

If you find yourself hoping that your FWB will one day turn into something more – then that’s not how things are supposed to go! Another big problem related to FWBs is a disease.

When you sleep with multiple people without protection, there’s a very high chance that something will happen.

And on top of that, many partners who engage in FWBs tend to neglect using protection. Even if both parties are clean from diseases, not everyone has s#x without protection.

Just keep in mind: when engaging in risky s#xual activities – protection is always essential! And there are also moral issues connected to having an FWB.

Some people may find having more than one partner at once disrespectful towards oneself and towards others; others may just prefer being monogamous by nature. Whatever your stance on these issues may be.

When a FWB turns into something more than just intimacy, it can really mess up your existing relationships.

Having an FWB is completely normal and there’s nothing wrong with that, as long as everyone understands what they’re getting themselves into.

However, when you start developing feelings for someone that you know you can’t have a real relationship with, things can get problematic pretty quickly.

The moment one party starts feeling emotional for their friend-with-benefits, everything changes.

This is where boundaries are really important – at least then everyone will be clear on what their expectations are from each other.

If either of you is unwilling to move on after your FWB has turned into a romantic relationship, then now would be a good time to call things off before anyone gets hurt in any way.

Friends with benefits aren’t supposed to make anyone feel used or objectified – it’s about two people getting together just because they want some fun.

At times serious, but however, it might turn out that both parties involved actually want something serious, but aren’t brave enough to come out and say so directly.

Again – setting clear boundaries beforehand can help avoid misunderstandings like these. Who wouldn’t love someone who was single and wanted them exclusively?

Your job is to ensure that neither you nor your friend with benefits expects too much from each other.

Even if it’s consensual and feels great at the moment, a friends-with-benefits situation shouldn’t make either of you feel taken advantage of or alone.

If you’re not careful, you could end up hurting your feelings or getting hurt and that’s no way to treat someone you care about.

Also read: What does friends with benefits mean?

People in relationships tend to make all kinds of sacrifices for their partners: they go out on cold days when they would rather stay home and turn down opportunities to see their friends because those are times when their partner would rather spend time together.

The relationship will fizzle out after a while because there’s no dedication or reason behind it – just a fling and nothing more.

Making physical love is fun in short bursts, but if you do it over and over again eventually one or both of you might start feeling used or even abused.

This feeling will only lead to resentment. So, how long should you maintain a FWB relationship before calling it quits?

It depends. If you don’t feel as though your partner is holding up his/her end of things then it’s probably best to let him/her go before you feel resentful about them.

However, if both parties show commitment and respect towards each other then FWB relations can last indefinitely without any negative feelings involved.

Also read: Can friends with benefits turn into a relationship?

If you truly enjoy spending time with someone, chances are you’re going to end up feeling attached to him or her after a while.

Once that happens, it can get very difficult for you to have an intimate encounter without getting jealous and wanting something more than just intimacy in return.

This will only lead to problems and hurt feelings if your friend-with-benefits situation starts turning into a real relationship but one person decides they don’t want anything serious and that’s definitely bad for your emotional health.

That being said, however, it doesn’t mean that you shouldn’t be romantically active before entering into a committed relationship.

When making out with someone who has no romantic intentions towards you or asking him/her on dates when both of you know what your relationship really is.

Try taking things slowly at first so as not to get too emotionally involved in the case he/she isn’t looking for what you’re looking for at all.

6 reasons why friends with benefits is bad

It means that you do not have a commitment with your FWB and there are no obligations toward each other in any form or shape, including monetary ones.

In addition, when starting a friends-with-benefits relationship, it is important that both parties discuss what they expect from such a relationship before diving into it head first.

Some people may want to be involved physically without having a romantic connection, while others might only be interested in an exclusive romantic partnership.

Because of these differences in wants and needs, there might be conflicts between each other.

2. Sometimes manipulating and using another only for a physical relationship:

It is a situation where one person gives and receives, while another receives only.

If you are giving all or most of what you want in terms of contact, attention, and other elements that make up a friendship, but your friend isn’t giving back on any levels, it’s no longer fair to call it a true friendship.

Friends provide support for each other during difficult times, both emotionally and physically.

Thus, if your FWB doesn’t step in when he or she should consider ending it. Some people will abuse their power by taking from someone who gives too much.

This shows that they don’t care about you at all, so give them their walking papers.

However, do not feel guilty about ending a friends-with-benefits arrangement because you are simply not getting as much out of it as you would like — everyone deserves more than one-sided relationships.

You never really know if your partner is being faithful, especially when he or she has multiple dating partners also.

Is it worth losing trust over? Is it worth sacrificing your own happiness? If you can’t say yes to those questions, then please walk away from his or her life now.

4. The beginning might seem fine, but often emotions grow unbalanced as time passes:

He/she may claim that he loves spending time with you so much that he feels jealous whenever you spend time with others – even close friends.

While I’m sure many women reading this would love to hear these words at some point, remember: Men always find ways to manipulate situations in their favor.

So unless a guy truly has these kinds of feelings towards you – ones founded on respect and admiration rather than selfishness – all of these words are meaningless and won’t help stabilize your relationship moving forward.

5. There is a high chance of catching a physically transmitted disease:

These days it is quite common to contract conditions you have never heard of, let alone had to deal with.

And although some are easily treatable, others require lifelong treatments that can be expensive and hard on your body in general.

Additionally, several STDs can cause cancer or infertility, which means that if you catch one through s#xual activity with a new partner that you’re intimate with regularly, you’ll probably want to reconsider the said relationship.

That said, relying on consistent use of cond#ms is generally a good idea regardless of your previous history or frequency of s#xual activity.

Also read: Signs your fwb is over

6. Waste of your time, efforts, money, and energy for a short-term fling

Like it or not, most girls want to be wined and dined and showered with gifts before they will ever allow you to sleep with them. This kind of relationship is just a waste of your efforts and time.

Being honest about your intentions from day one is something that can ruin what you have with a girl. At times, being casual works better for some people, but on average that does not last for very long – you know what I mean here, men.

But if things go beyond one hookup, it would be wise to sit down with your partner and have a discussion about whether he/she thinks s#x is something they want out of a potential relationship.

In conclusion, FWBs are not always a good idea. Whether it’s because you’re feeling yourself becoming more emotionally attached or because you want more commitment from your partner – in both situations, that’s a sign of something going wrong and it’s just not sustainable.

It may feel easy to find a friend who’s up for having some fun, but if you’re serious about finding someone who can fulfill all your needs and wants, then taking things slow is probably what will work best for you.

Also read: 100+ Questions to ask your friends with benefits

1 thought on “Why friends with benefits is bad? (6 Reasons)”