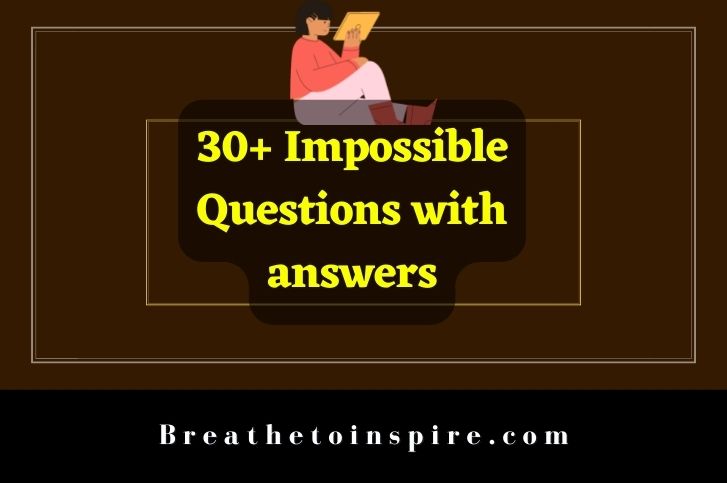 Ever ask yourself what it means to be human? How can we know anything about ourselves, the world, or even the universe? Can we ever truly define something as abstract as love or justice?

If you’ve ever found yourself wondering about these kinds of unanswerable questions—and seeking impossible questions with answers?—then this article is for you.

In this guide, you will learn about some of the most thought-provoking and impossible questions with answers that you might never find the answers to.

They will also make you think long and hard about what makes us who we are and where our world came from. Enjoy!

Here is a list of impossible questions with answers that mess with your mind:

The proof that Aliens exist is undeniable. Many people claim to have had contact with extraterrestrials in a dream or vision or in real life.

What makes them so special? Is it their exposure to UFO’s and Extraterrestrial matters which made them able to see these beings?

There have been numerous accounts about sightings by pilots, air traffic controllers, military personnel and police officers.

Can you explain all these encounters with aliens as mere hoaxes or imaginations from imaginative people who love indulging in scientific topics related to UFOs and extraterrestrials?

So, the mere suggestion that we are alone in the universe must betray some sort of philosophical objection to the astrophysical reality that we are not alone.”

Also read: 30+ Questions that are impossible to answer (Very deep and funny)

2. What is the meaning of life?

Life’s meaning can be different for each person, but it’s ultimately up to us to decide what it is and what we want it to be.

It’s important for us to remember that this isn’t a finite sentence- our lives are infinite, which means there are no hard and fast rules about what we should do with them.

Every single one of us is born with the same purpose, which is to create and grow. Life is a continual process, it has no final destination. So what can we do in this life?

That depends on the choices we make and how well we apply our talents. Our greatest achievement in life is what we will leave behind when we die.

3. How is life on earth going to become extinct?

In order for life on Earth to die out, humans must either become extinct or move away from Earth.

A third possibility is that an asteroid or comet might collide with Earth and destroy all living things.

The fourth possibility is that our sun could turn into a red giant in about 5 billion years which would likely make Earth uninhabitable as well as any other planets orbiting near us because they would get fried by solar flares.

The fifth possibility (which I personally don’t think will happen) is when the Milky Way galaxy collides with Andromeda Galaxy in about 4 billion years which might create two new galaxies.

This event would most likely not affect planets orbiting either galaxy too much unless there was some kind of supernova explosion from one of them destroying everything nearby.

Also, One day they may be poisoned by their own atmosphere or frozen by ice caps as they shrink because of global warming.

And then again there are also some who think that aliens might have an idea in this matter which leaves us clueless about how life on earth is going to end.

There are endless possibilities that life on earth is going to become extinct. But these are some very strong predictions by the scientific community.

4. What is the oldest known object in the universe?

Scientists estimate that the Universe is 13.8 billion years old. There are objects in space older than this age, which means they existed before the solar system formed.

Objects like asteroids and comets formed from dust-like particles and ice grains clumping together over time within dark interstellar clouds of gas and dust during an era called pre-solar nebula.

5. When did time start existing? What was there before the beginning of time?

The concept of time is complicated and is something that people are still trying to understand.

Science hasn’t provided any solid answers to this question, but theories include a number of possibilities, including that time didn’t start existing until after the Big Bang.

6. Where do dark matter and dark energy come from?

Dark matter is thought to comprise 25% of the mass-energy of the observable universe and it appears to interact gravitationally with normal matter (luminous matter).

Although it neither emits nor absorbs light (radiation). Even though it is called dark matter, you can still see it every night as faint smudges in astronomical images.

One theory is that it’s to communicate our exhaustion to others.

When one person yawns, an entire group can yawn as well. When empathic people watch others yawn, brain imaging studies show that areas associated with social function are activated in the brain; this could lead them to yawn more easily.

By yawning, we are informing others that we’re tired and need a break- not just for ourselves, but for the group.

This has been seen in lab experiments, where yawning subjects had decreased heart rates and cortisol levels, indicating they felt less stressed and relaxed afterwards.

8. What makes life worth living?

9. What is the longest word in the English language?

The longest word in the English language is Pneumonoultramicroscopicsilicovolcanoconiosis.

However, this word contains 44 letters and yet it doesn’t appear in any dictionaries.

This suggests that there are words with more than 44 letters which do appear in dictionaries, but for which it’s unknown what they are.

10. What determines our fate?

This question goes back to Aristotle’s four causes: material cause, formal cause, efficient cause, and final cause.

11. What is the ultimate truth about life?

Well, according to many religions, the ultimate truth about life is that it ends up in heaven or hell. For example, Islam teaches that on Judgment Day Allah will resurrect all humankind to account for their deeds during their lifetimes.

Muslims teach that those who have led righteous lives and believed in Allah’s revelations will receive their reward in heaven; others will go to hell.

Christianity teaches essentially the same thing – all who die in Christ shall live with Him forever.

However, as per philosophy and scientific view, the ultimate truth about life is that “Not yet known”

Science teaches us that every living organism consists of cells, which keep reproducing themselves indefinitely to maintain their original size.

The most interesting fact here is that cells don’t last forever because they get damaged over time due to environmental factors like free radicals, harmful radiation, exposure to chemicals etc.

While DNA keeps degrading gradually leading to premature aging. This is the reason that the body ages, and eventually dies.

One of the mysteries about life is that it starts out small and becomes big, then it becomes small again.

For example plants have chlorophyll and absorb energy from sunlight through photosynthesis; animals require oxygen for breathing;

But how and why did different types of life forms exist in the first place? Scientists have put forward many theories to try and answer this question.

One theory suggests that because different parts of Earth offer various conditions.

It led to the development of many kinds of organisms-more varieties are found in wet regions where there is plenty of water while fewer varieties can be found in arid regions with limited water supply.

Another theory suggests that life emerged from chemical reactions on Earth during ancient times when oceans covered much more land surface area than they do now.

Yet another theory is that life emerged from a primordial soup or ooze consisting of hydrogen, ammonia, and methane.

These ideas sound plausible enough to answer the question of Why is there not just one form of life? but then again, no one can say for sure what really happened.

Impossible questions with no answers

Here is a list of impossible questions without Answers:

1. What happens to consciousness after death?

2. How does the brain process death?

3. What is the proof of soul leaving the body after death?

4. Is there life on other planets?

5. Is there such thing as free will or are we all just puppets in some cosmic show?

7. Can we travel through time and change things?

10. If we die what becomes of us, do our souls leave our bodies, where do they go?

12. Is karma real and if so what exactly is it?

13. What was before the Big Bang that started everything?

15. Why do bad things happen to good people and vice versa, how can anyone be sure about anything anymore with so many questions that no one can answer?

Also read: 50+ Questions no one can answer (with possible answers and scientific explanation)

Here is a list of impossible trivia questions with answers:

1. What was originally developed as a torture device in the 1800’s, but today many people use them daily?

2.What does a recent survey show 1/3 of people do while driving?

3. 11% of people have this as their new year’s resolution?

4. What do 6 out of 10 Americans say they want to change about themselves?

5. The average person eats three of these every day?

Answer: Potato chips. People can be as different from one another as night and day, but they all share one thing in common; they need someone to love them.

But sometimes life just gets so busy that it is hard to make time for loved ones. Luckily there are some simple things you can do to reconnect with those you care about most.

Also read: 50+ Deep, thought provoking and hard questions with Answers about everything.