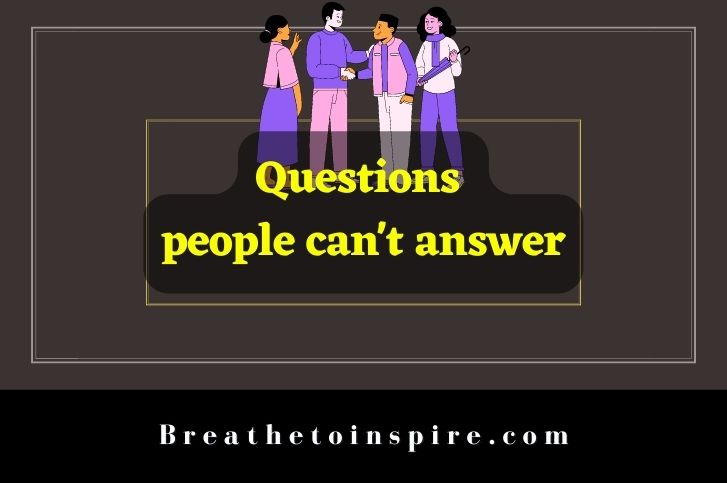 Humans are really curious and want to know everything, yet we still encounter some mysterious and mind blowing questions people can’t answer no matter how hard we try.

Can people change their own fate? Why do humans act like demons and gods? What does death feel like?

These questions are some of the most mysterious we have come across so far, and they’ll remain unanswered until the end of time.

We might think we know the answers to these questions, but we’re actually only scratching the surface of what life is really all about.

In this article, you will learn more such questions that people can’t answer, and have no idea how to riddle them. Leave your most fascinating question in the comment section below. Keep wondering and seeking!

Here is a list of questions people can’t answer:

1. Is death final or does it lead to something else after all?

Death is such a mysterious destiny of life. Often overlooked and taken for granted until someone near us dies and then we suddenly start questioning the whole idea.

Questions like is there any afterlife? come rushing to our minds. But then again, this question itself is pretty difficult since no one can answer it.

2. Why does reality exist?

You see, our reality – as we understand it – is based on senses, which are like filters: each sense has its own limit, its own borders and so nothing from outside these borders ever reaches us.

So then how can we possibly imagine what exists beyond our own limits?

3. What will happen to us when we die?

Do we simply cease to exist after our physical bodies have perished or do we live on in some other form?

There’s plenty of debate on what happens to us when we die and if there’s an afterlife or not.

This thought often arises when someone close dies, leaving their loved ones behind to question whether or not they still exist somewhere else.

4. What’s the point of everything?

With billions of galaxies and trillions of stars, the earth is a small little rock orbiting a tiny sun that sits inside our galaxy among billions of other galaxies.

When it comes to the great mysteries in life, many people get overwhelmed by trying to figure out why things happen at all.

So much so that they forget to look back at what already happened and enjoy what is happening now.

This question is answered most commonly with a response of God made God.

People can speculate on the identity of the Creator, but no one can prove it and it is unknown who created the Creator.

6. Why does the existence of intelligence in some of us make others feel inferior?

This is a question many people have asked themselves. Intelligence is one of humanity’s most remarkable qualities.

Yet it can also be incredibly divisive, making other people feel left out and inferior.

One theory as to why humans are so intelligent is that our ancestors lived near water sources such as lakes or rivers, where food was easier to find than in arid or forested areas.

7. Are the questions we are asking intelligent enough to find the mysteries of the universe?

The universe is remarkably complex and will probably never yield its secrets to our limited minds. However, if there is any hope at all, it might just lie in the curiosity of humankind.

For many people, ghosts are taken as a given – most believe in their existence and that they walk among us every day.

Others, however, aren’t so sure whether they exist or not.

Ghosts remain one of life’s great mysteries: if they do exist, then who or what are they and why don’t we have any reliable methods of detecting them?

9. Why does society function with unfair social structures?

Why do humans allow dictatorships to continue when democracies show better outcomes? These questions go unanswered.

However, thankfully science has shown that humans need fairness and democracy just as much as they need food, water, shelter, and love.

The world needs more people asking these unanswered questions so that someday the answers may be discovered.

10. Does consciousness reside in the body or in the mind?

Consciousness is one of the biggest mysteries in the world and scientists are constantly looking for a solution.

11. Why is time measured in the past, present, and future?

Time is such a crucial part of the human experience, yet it remains unmeasurable and cannot be grasped.

Philosophers and scientists have tried to find an answer to this question for centuries, but none were able to come up with anything conclusive.

12. Why are some of us lucky and others aren’t?

13. Is there heaven and hell, how does one know?

This is also one of the questions that people can’t answer. The idea of hell and the devil is born in the fears of man.

As far as heaven goes, it’s one of humanity’s oldest beliefs and it speaks to our desire to escape the sorrows of this world.

In the Bible, Satan is called the father of lies and the god of this world. He was once an angel who rebelled against God and fell from Heaven.

But in the end, it’s unclear exactly what he did to cause his expulsion.

This is another question that people can’t answer – the reason that the sky appears blue is because of oxygen molecules in Earth’s atmosphere scattering light from the sun.

Stars are giant balls of gas and dust from which energy and light radiates mostly made of hydrogen and helium.

Scientists often use the word star to describe individual stars within galaxies, such as our sun, though they are aware that the word star has other meanings such as celebrity status.

Stars have several properties including mass, luminosity and temperature but scientists cannot confirm that stars are actually living beings.

They can guess that since they give off light they must be doing something internally but who knows?