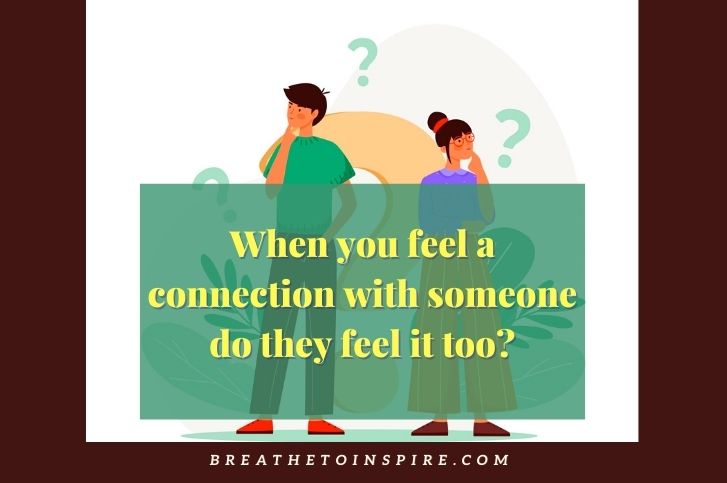 When you connect with someone, it can be an amazing feeling. It can also be confusing and painful at the same time. Notably, when they don’t feel the same way as you feel towards them.

It happens because your brain records up all the data from your senses and combines it with the information from the other person.

If you’ve ever been in love or deeply attached to someone, you know what I’m talking about. Whether it’s with a person, a pet, or something more spiritual, connecting with other beings can be an amazing and confusing experience.

Intimacy is the heart of human connection. After all, it’s not every day that we get to know someone deeply, intellectually, or spiritually.

Especially in this day and age, social media has created an unprecedented opportunity to connect with people across the globe and make new connections.

But it can also be frustrating when things are new and unfamiliar. Even if you barely know someone or are friends for years;

But the real question is that when you feel a connection with someone do they feel it too?

Wouldn’t it be wonderful if we could just get on and chat or talk and be connected instantly? Generally, connecting with someone requires rapport, which is built on trust and authenticity.

Though that’s the foundation for creating any deep relationship, that’s not always the case.

Some connections don’t take that long. So, let’s dig deep and find out how people connect with each other and whether it is mutual or from one side? And How to know when someone really shares the same bond with us?

Suggested read to you: How to stop being emotionally attached to someone?

When you feel a connection with someone do they feel it too?

In short, Yes! It happens, but the chances are very rare.

In order to feel such a mutual instant connection. The two individuals must be highly intuitive and shared the chemistry of the same empath bond to read each other’s minds, feel each other’s emotions, and understand each other’s motives.

However, sometimes, when you feel a connection with someone, they may not feel the same way instantly because of personality incompatibility. And in other cases, there are chances for both to develop similar feelings.

But it requires both your time and effort to connect with each other and make the relationship successful.

Often when we feel a connection, it’s more instinctive than conscious. This is one reason it can be hard for others to understand just how deeply rooted certain feelings are if they are not as sensitive and intuitive as you.

Also read: What does it mean when you can’t stop thinking about someone you barely know?

As per the research studies, most people find that when they connect with someone intuitively, the other person feels it too. But it’s not necessary for a relationship to turn into love.

However, you could just as easily be friends with someone and later discover you have more in commoner than you realize.

Or you could join a club or an online community and find out that you have more in common with others who share your values than you realize.

Later, if it works both for you, then you can take your relationship to the next level.

According to another relationship theory, people who people believe in an instant and intuitive connection consider themselves soulmates. They also believe he or she is the right partner for them.

In the same study, another set of people believes successful relationships take time and effort and this theory is called the “Work-it-out theory.”

Also read: What is it called when you care too much about what others think?(10 tips on how to not care what people think)

However, in each case, there is no guarantee of permanent marriage. Their study discovered that soulmates who believed that they found the right partner in their life had highly satisfied with their relationship.

But they also had a high divorce rate when they felt they were not soulmates and are not meant to be together.

We all have moments of connection with people. When we meet someone new, we instantly feel a bond formed between us, no matter how small it is.

And that raises many self-doubts and questions, such as when you feel a connection with someone do they feel it too?

But the fact is, such a feeling of connection between two people can’t be explained. It’s only felt instinctively and happens naturally. The more you try to grasp for it, the harder it becomes.

The feeling of connection is stronger the closer you are to somebody. And even more so when you completely attach to them emotionally.

When this happens, it can be hard for us to accept the fact that these bonds do not last.

The interesting thing is that there is no law that prevents us from falling in love again, even after the first time. The strongest bond is the one that has never been broken.

My best advice is that, don’t force or rush any relationship. If both of your feelings and connection are genuine, authentic, and mutual, instinctively you will come to know.

Also read: Psychological facts about thinking of someone (Research-based)

Pay close attention to your guts and act accordingly. No matter whether or not you both are soulmates, relationships require care, attention, support, time, and effort to make them successful.

Just be confident in your approach and express your feelings before you lose him or her.

Sometimes, due to low self-esteem or introverted nature, we shy away to communicate our genuine interest in them. And the same applies from the opposite side too.

So, if you both hide each other’s feelings because of fear of rejection and confrontation, you both are going to lose the opportunity to make beautiful and pure love. Be thoughtful, but listen to your intuition and act accordingly. Good luck.

10 Psychological reasons behind why you can’t stop thinking about someone.