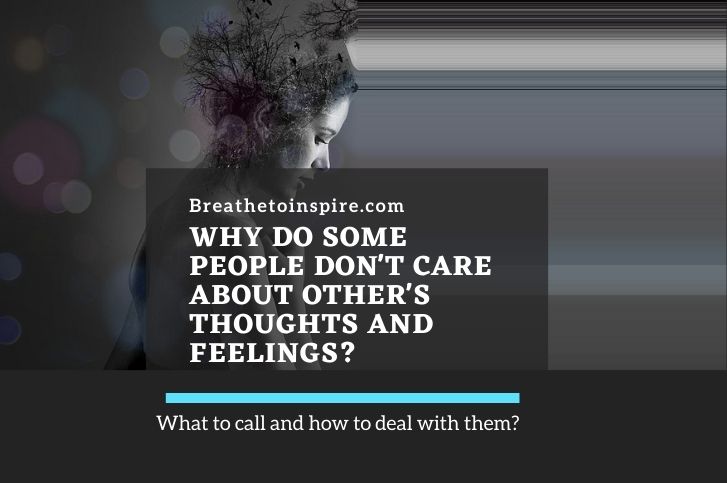 We all know a lot of people who do not care much about others’ opinions and feelings. They can be rude, insensitive, and even unkind at times.

When you do your best to treat people with respect and kindness, being ignored or taking your good intentions for granted feels really bad. But what’s even worse is trying to figure out why they have such a negative attitude towards others.

People who ignore your feelings can only be understood from their perspective. There is no single cause that can explain why some people behave the way they do and act in accordance with their nature.

Also read: How to tell someone they hurt your feelings? (7 Tips with examples)

Understanding why do some people not care about others feelings? And the reasons behind insensitive behavior will help you better manage your expectations from others as well as stop wasting time on fruitless attempts to change a person’s attitude.

People often don’t care about the feelings and the opinion of others. But why? There are several reasons:

Let’s explore some of the human nuances and their behaviors in detail below.

Highly recommended related article: What is it called when you care too much about what others think? (10 tips on how to not care what people think of you graciously)

Why do some people not care about others feelings and what they think?

In order to view something from a broader perspective, we can’t come to one particular conclusion why a person behaves the way he or she does.

The way we perceive reality depends on our social status and life experiences. It’s very difficult to agree with a particular behavior or to judge someone without having lived in the same circumstances.

When you are involved in a situation, it’s easy to forget why some people behave the way they do, it’s easier to condemn them, and it’s harder to understand them.

An important thing to remember is that everyone around us is going through a life journey, and not everything will add up in our minds.

Some people believe that it is their right to do or say anything they want without caring about the feelings of others.

For example, they may take offense at things that are not offensive to most people and feel free to tell others off for no apparent reason.

There are some who believe that people lack empathy because they have a deficit in their serotonin levels. Others say it’s because of our culture and how we’re taught to be less sensitive to others’ feelings.

Nonetheless, We can say one thing about each type – those who care are more self-aware and have a subtle understanding of the world around them.

Whereas others are fighting to figure out their own identity and desperately to show how powerful they are in their own ignorance.

But, considering scientific and psychological terms experts call them particular names depending on their psychological conditions.

Word for someone who doesn’t care about others feelings

“Apathetic” is the word for not caring about others’ feelings.

Relatively, there are also other words, in psychology, for people who have a lack of empathy – “Sociopath” and “Psychopath”.

Traditionally, in psychological terms “Sociopath” and “Psychopath” are two words for someone who doesn’t care about others’ feelings. This is due to their anti-social behavior and lack of empathy traits.

If you want their meanings, let’s understand their definitions briefly:

In psychology, sociopathy can be termed Antisocial personality disorder(ASPD).

Whereas the Definition of a sociopath: “A sociopath” is a term used to describe someone who has an antisocial personality disorder (ASPD).

People with ASPD can’t understand others’ feelings. Sometimes, they’ll break rules or make impulsive choices and decisions without feeling guilty for the harm they cause.

What is psychopathy? and the definition of a psychopath.

By definition, a psychopath is an unstable and aggressive person who is suffering from a chronic mental disorder with abnormal or violent social behavior. Which manifests itself in callousness, antisocial behavior, absence of moral values, and extreme egocentricity.

Psychopathy, which comes from the Greek roots psykhe, which refers to the mind, and pathos, which means suffering, has shifted in the popular meaning over the years, but it has always been associated with mental sickness.

Also read: How to stop overthinking?

“Psychopaths are known to have no morals, standards, ethics, and values, while sociopaths may be able to feel some empathy and remorse, but only to a limited extent. Psychopaths follow social norms when it is convenient for them.”

Here is the list of more differences between sociopaths and psychopaths:

Also read: What to do when you are hurt by someone you love?

Word for someone who doesn’t care what others think

A person who doesn’t care what others think is someone who values themselves.

The meaning of this word is very interesting and the traits of a word that doesn’t care about others can be found in many people around us.

It could be as simple as not caring about what other people will think about your clothes or your skin color.

It also could be as deep as not caring how society views you because you know that you’re the best version of yourself.

A handful of words come to mind when someone thinks about a bad person. Terrible, evil, and vile are just a few words that come to mind.

Also read: What to say to someone who has hurt you deeply? (8 Tips with example conversation)

When you think of someone who doesn’t care what others think of them, the list shrinks significantly. The word that is most common is “arrogant”.

The word “arrogant” has an interesting history. It comes from the Latin word “haut” which means haughty and proud.

This refers specifically to people with a haughty and proud attitude who will not bend in their thinking or behavior because they feel that they are better than everyone else.

In modern-day society, there are many synonyms for this word such as self-centered or conceited.

How do you know when someone doesn’t care about your feelings?

One way to know if someone doesn’t care about your feelings is if they invalidate you.

When people invalidate you, they deny the validity of what you are saying and what you feel. Invalidation can be subtle or blatant.

It can also be a result of people who don’t want to deal with emotions or things that make them uncomfortable.

Invalidation can be something as simple as telling someone how they should feel after a certain situation has happened, which is not very helpful at all because it avoids the emotion from happening.

Invalidation can also be things such as telling someone that their feelings are wrong or just telling them to “get over it”.

Also read: Why do people disrespect me: Your deep guide to deal with disrespectful people

Signs she or he doesn’t care about your feelings

How to deal with a person who doesn’t care about anything?

Some people are simply not built to be empathetic. It’s not that they don’t care about others, but rather that they can’t understand why someone else would feel any emotion other than the one they’re feeling themselves.

There are many reasons for this, including a child’s environment (for example, if they grew up with parents who did not model empathy), brain chemistry issues, and even Autism Spectrum Disorder.

While it may be frustrating when someone doesn’t have empathy for you, there are ways to handle the situation.

First, think about the relationship between you and the person you’re dealing with. If this is a friend or family member who has always been lacking in empathy, try not to take it personally.

If this is someone new in your life, try to think of it as something that might be interesting about them—a quirk that could make them special or unique in their own way.

The key thing here is to remember that this is something that defines them on an intrinsic level; it’s not about you at all.

If you want to change your relationship with the person for the better and build more understanding between the two of you, try adopting techniques that other people use to get through to those without empathy.

Needless to say, it deeply hurts when a person whom we love shows no affection in return, represents no human emotion, and disrespects, disregards, and demean without caring how it would affect someone’s overall physical and psychological health.

There are many reasons why people put up this facade. They may be insecure, ignorant, or have. The only way to deal with such people is to leave them alone if they hurt you purposely.

Otherwise, these people are not worth your time, energy, and patience. You should cut them off, as they will not reciprocate your efforts with anything of substance for you.

A person who doesn’t care about anything might have a sense of entitlement that they can do whatever they please to get what they want.

These are the people who give you the impression that nothing in life matters to them and that they just take what comes their way without any resistance.

Eventually, soon or later this sort of mindset leads them to their own destruction.

However, If these whom you can’t leave but have to face anyway, then it is worth considering, they really need some professional or psychological help.

Also read: How to deal with someone who hurt you emotionally?

Tips to deal with people who lack empathy

1. If they do not change, try your best to move away from the people who are toxic and not good for your health.

2. Make Peace with yourself and the Truth that – they don’t care for you.

3. Accept your feelings and go through the pain until you realize there is no point in punishing yourself for someone else’s ignorance.

4. Take a break from the normal life and focus on self-care and give enough space and time to heal from your wounds and bounce back.

5. Forgive yourself for punishing yourself and never blame yourself regardless of your choices if you were true and sincere with your intentions and actions.

6. Share your thoughts and feelings with someone whom you intuitively feel comfortable with and ease your heaviness.

7. Just fall in love with yourself and take care of your body, mind, and soul.

Also read: 15 Situations when someone you love hurts you deeply