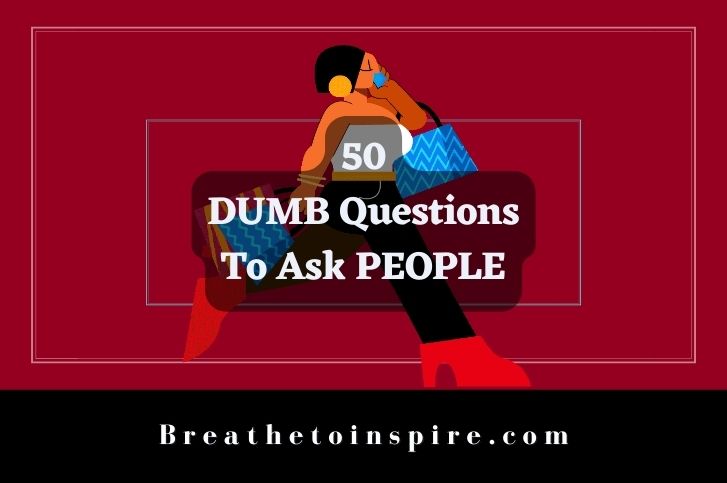 Questions give you the chance to know and engage with people. Without it, you would just get bored to death alone all your life.

Deep questions do the great work to spark such interesting conversation, However, sometimes it’s better to consider dumb questions to ask people for fun to keep the discussion going.

Everyone loves to talk about themselves, how others are different and how we can get along.

These are so many stupid and dumb topics for engaging communication,

In this article, we’re going to take a look at some of the dumbest questions to ask people.

They’re fun and make no sense in their own way, but they aim to push beyond normal conversation to something more interesting and entertaining.

Here is a list of very stupid and dumb questions to ask people:

1. When you are alone, why can’t you see everyone?

This is such a dumb question, but it makes sense in a way if you think about it.

When we’re surrounded by other people, we tend to focus more on them than ourselves.

But when we’re by ourselves and not looking at anyone else, all we can see is our own reflection!

2. If you sneeze with your eyes open, do they come out?

Very funny to say yes and watch their reaction as they try to figure out whether you were serious or not.

3. Is There A Probability That Cats Understand Us Better Than Dogs?

The cat-human relationship has been a popular subject for many years due to the differences between us and them.

However, dogs have been found to understand human body language better than cats, so this seems like a great debate to have with cat lovers.

4. What Would Happen If All Bats Disappeared From Earth?

The bat population across the globe is declining rapidly, which means there will be consequences in our ecosystem.

We would notice things like less bugs around during summer months, which would make agriculture difficult.

And bats pollinate plants and trees that produce fruit crops humans rely on for food sources; without them pollinating crops like bananas and pineapples, crops could die off too.

It doesn’t sound very good does it? Though this question may sound dumb, but it is the real problem happening around the world.

That’s a pretty weird thing to think about, but I don’t know if it’ll eat itself.

Wouldn’t it be its favorite meal? Consider this dumb question to ask people and get to know what their unpopular opinion about it.

6. What language would plants speak?

There are plenty of different languages on earth, and it might seem like the most likely option is English (Joking!).

But it is possible that they communicate through smell and touch, which might explain why you can never seem to get a plant to grow.

7. Have you been dead before you came to life?

The idea of this question is confusing and can be debated, but it’s a silly enough question to get a laugh.

This is such a dumb question, but it makes sense in a way if you think about it. When we’re surrounded by other people, we tend to focus more on them than ourselves.

Also read: 100+ Questions to ask people to get to know them better (good, funny, interesting)

8. Have you ever met a person who never existed?

The question is, did this person exist or was he/she a figment of your imagination?

If they did exist, then where did they live and if they didn’t, why do you think you imagined them in the first place?

A few possible explanations are that you had a bad dream about them, or maybe it’s your subconscious telling you to be careful.

Either way, this question can get really deep really fast.

A moon is an object that orbits a planet and reflects light from the sun onto it.

This is why we have phases of the moon: full, new, waxing, waning. The shape of our natural satellite is slightly elliptical, and changes in size depending on how close or far away it is from Earth.

So can we create our own moon in orbit, who knows whether it will be possible? Just ask this interesting question to people to know what they might have to say.

This is such a dumb question to ask people and doesn’t even make sense even if you think about it.

Even though this question is dumb, it keeps us awake all the night, if we are completely obsessed with it.

Dumbest questions to ask people to spark a great conversation

The following are some of the dumbest questions to ask people to keep the conversation going:

11. Is it bad luck for a bride to see her groom before the wedding?

12. How many animal bones can fit inside one human body?

13. Who decides what time zone we live in?

14. Can anything be heavier than lead?

15. Why can’t we tickle ourselves?

16. Does every insect bite feel exactly the same as every other insect bite on my body, or is there some kind of variation?

17. Do most jellyfish sting humans and die right away, or do they keep stinging until they die?

19. Which sentence contains the most words with six letters: The quick brown fox jumps over the lazy dog or Shooting pandas from helicopters is illegal in Scotland?

Here is a list of dumb questions to ask dumb people:

21. You mean both feet go to the left side of your brain?

22. How do pineapples grow?

23. Were chickens around before dinosaurs were extinct?

24. Why did you start eating instead of finishing it?

26. Am I too old to wear a onesie without looking weird?

27. Is lip gloss made out of beeswax good for your lips?

28. Why am I always so tired during work hours?

29. What would happen if someone who was born blind suddenly became able to see?

30. Could you imagine living life without ever being able to taste your favorite food again?

These are a few hilarious and funny dumb questions to ask random people:

31. What color is a rainbow on the other side of the world?

32. Is it possible for me to break this jar using only my voice alone, even though I’m not Hulk Hogan?

33. What is the difference between a ghost and a spirit?

34. What makes it difficult to walk across wet grass?

35. Why do my fingers smell bad sometimes, but my nose doesn’t?

36. Why do we need to consume water if it’s just going to end up coming back out of us anyway?

37. Why do my fingers smell bad sometimes, but my nose doesn’t?

38. Why do we need to consume water if it’s just going to end up coming back out of us anyway?

39. Why do I often hear a ringing in my ears, but I can’t find the source of the sound?

40. What is the real point of cornflakes?

Here is a list of weirdest stupid questions to ask people:

41. How can you tell if a woman is wearing high heels?

42. Why do clouds in the sky turn different colors throughout the day?

43. What is the best way to lick an envelope?

44. If a doctor has to amputate my arm, will I still be able to play guitar and paint with it?

45. How do we know if a star is in the process of becoming a black hole?

47. Why do I have to go to bed before my parents if they have to wake up earlier than me?

48. What is the square root of two hundred ninety-seven thousand four hundred eighty-eight?

49. How long can you leave your makeup on before it becomes unsafe to use?

50. What does it mean when you don’t know what it means?