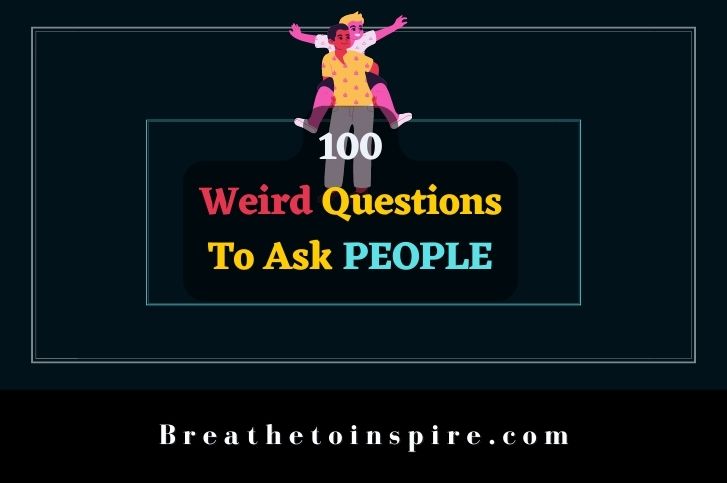 Sometimes random conversations can be really boring. After all, there is not enough stupid and strange topics to ask someone.

You may ask someone a question and they will respond very succinctly, but it’s seldom fun.

You need something to open up the conversation — maybe a few weird questions to ask people for a fun conversation.

You may want to spice up your next date or with a group of random people with a different kind of conversation — one that will quiz you on things you never thought about.

If you’re really bored of small talk, what should you do? How about asking people weird questions to create a fun environment.

This is a list of 100 weird questions to ask people which might help you learn something new and also have some fun in doing that.

The following is a good list of weird questions to ask people:

1. What Unwritten Rules Will You Add To The Law To Make You Exempt From A Certain Crime?

People may sometimes have some personal tendencies that the law may not agree with. Find out what they are and see what kind of man he is inside.

2. What would you do if you found an alien in a store room?

Some people say they will try to befriend the alien while others say they’ll run away screaming. There are so many different reactions to this question, so find out which one is yours!

3. Would you rather have no hair or no private parts?

This is such a crazy question that most people wouldn’t answer truthfully. Still, it’s worth asking because you may be surprised by the answer.

4. Why do Bigfoot and the Loch Ness Monster never show themselves?

What about the Yeti? Isn’t it their responsibility to show everyone what they are? If people are so curious, and all of these creatures exist, then where are they?

5. If You Could Choose One Supernatural Being, Who Would It Be And Why?

Some Godly superpowers can be interpreted differently depending on who you ask.

6. If You Had Enough Money To Bury Yourself In Any House In The World, Which Would You Choose And Why?

Is he more interested in location or square footage?

This is a good way to find out how much they want for themselves or his family in terms of needs vs. wants.

7. What Happens When We Die?

This is a weird and interesting topic to talk about.

Do People Really Believe In An Afterlife Or Reincarnation? Now, this is just creepy but still interesting! Also, ask them whether they believe in ghosts?

8. If You Were To Become President, What Would You Change?

This is a great conversation starter that gets to know someone on a whole new level.

They may be more interested in world peace than they let on initially or they may care deeply about improving conditions in third world countries.

Weird questions to ask a group of people

Here is a list of weird questions to ask a group of people:

9. How do birds actually pee?

10. How old was the oldest person you’ve met so far?

11. Where is all your money currently located?

12. Do you believe in zombies?

13. Are socks becoming extinct due to online shopping?

15. When did you last speak with someone and realize that they didn’t care about anything except themselves?

16. When did you last cry because you couldn’t sleep?

17. Did you know that Mount Everest is made of snow, ice, rock, and dirt?

18. What’s the most expensive thing you own?

19. Would you rather live a long life without children or never get married?

20. Have you ever been attacked by a cow?

22. Have you ever tried absinthe?

23. Have you ever tried using fake eyelashes?

24. What words does YOLO stand for?

25. Does being bilingual affect intelligence levels?

26. Is there any evidence that Sasquatch exists?

27. Has anyone told you that you look like someone famous before and who was it?

28. Could men survive pregnancy if they adopted their mother’s uterus as their own uterus to carry the baby during pregnancy?

Weird questions to ask people to get to know them

The following is a list of Weird questions to ask people to get to know them:

30. Have you ever stuck your finger in a socket?

31. What is the worst possible answer to the question, What’s your favorite food?

32. What are three of your least favorite colors?

33. Do you think that someone should be entitled to three wishes if they find a genie and they use them wisely?

34. If there was no gravity, would we float off into space?

35. What is the craziest nightmare you have ever had?

36. If a tree falls in the forest and there’s nobody around to hear it, does it make a sound?

37. What would be your response if someone punched you in the stomach?

38. Do you think aliens exist?

39. What would you do if you found out your best friend was a serial killer?

40. What’s the first song that comes to mind when I say the word Dinosaur?

42. If you could be anywhere in the world right now, where would it be?

43. Do you think humans are born good or evil?

44. Which animal scares you the most?

45. Have you ever talked to a psychic?

46. If you had to choose between living in the wild and living in a zoo, which would you choose?

47. What are some of your earliest memories?

48. Have you ever broken someone’s nose before?

49. Do you think that the world is overpopulated?

50. Have you ever ridden on the back of a motorcycle before?

Also read: 100+ Questions to ask people to get to know them better (good, funny, interesting)

Here is a list of Weird questions to ask people for fun:

51. What’s your least favorite type of pie to eat?

54. the ocean or the mountains?

56. When was toilet paper invented and who invented it first, Koreans or Americans?

58. In what country does ser not mean anything?

59. What year was the Statue of Liberty given to America by France?

60. Which state is shaped like a rectangle and includes Alaska, Hawaii, Nevada, California, Oregon, Washington State, Idaho, Montana and Wyoming?

61. How long ago did Christopher Columbus set sail on his voyage to America from Spain?

63. Would you rather eat with chopsticks or fork and knife?

64. If you knew a family member was going to die tomorrow, would you tell them today?

65. Would it bother you if all the trees in your city were purple instead of green?

67. How would you describe what the world looks like to someone who has never seen it before?

68. Would you wear glasses if everyone else did?

69. Does having money make life easier or harder?

71. When you were a kid, did you try growing up faster so that adults thought more highly of you than children did?

72. Did you consider sleeping as a profession?

73. Has anyone ever offered to buy anything off of eBay from you and then never paid for it?

74. What was the last thing you spilled on yourself?

75. What song will always remind you of high school?

77. If I showed up at your door as a stranger and asked for some food, would you give me some?

78. What did you order off the dollar menu today?

79. If somebody doesn’t know who Santa Claus is, does that mean they’ve never been naughty or nice?

80. Where does milk come from?

81. Would you rather be a lion or a gazelle?

82. What is the length, breadth and height of your pubic hair?

83. What is the first word that comes to mind when you read yam?

84. How much sugar do you put in your coffee?

85. Can you tell me what day it is right now without telling?

86. What are your thoughts on cannibalism?

87. Have you ever gone skinny dipping?

89. What’s the grossest item in your fridge right now?

90. What is the weirdest noise you have ever heard?

91. What sound would you make if you were a dolphin?

92. What would you do if you saw a rat outside of your house?

93. What is the grossest drink you’ve ever tasted?

94. What’s the craziest thing you’ve ever done in public?

95. If your house was burning, what three items would you grab before leaving?

96. What is the hardest decision you have ever made?

97. What if you suddenly gained the ability to speak to animals? What would you say?

98. If you could be any animal, which one would you be and why?

99. Have you ever felt like someone else was living inside of your body, controlling it like a puppet master with strings attached to your fingers and limbs?