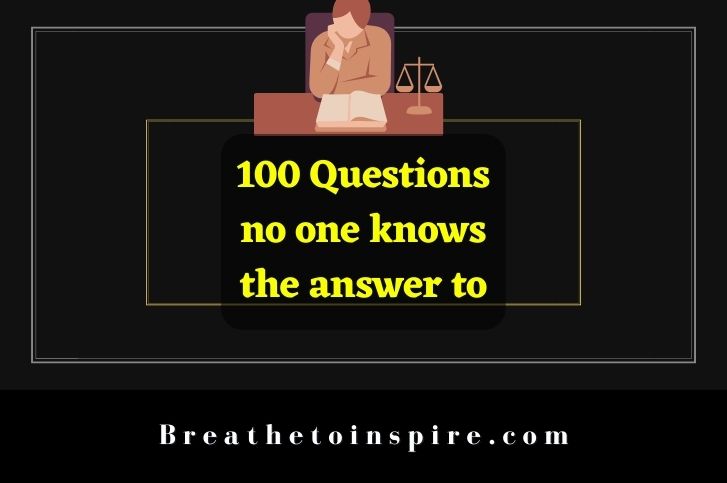 What happens if we discover the elixir of life? What is the purpose of the soul? These are some mind boggling questions that no one knows the answer to including some unanswerable questions like what is the ultimate fate of the existence and why did consciousness emerge?

We’ve all been there. Someone has asked us a question that we’re absolutely positive doesn’t have an answer, and we’re not sure how to respond in an appropriate manner.

Some mysteries are so strange that it’s hard to believe anyone could even think them up.

There are many life’s mysteries and unanswered questions that have baffled scientists and scholars alike. Some of these mysteries date back centuries, while others were only discovered within the last decade or so.

Either way, it’s safe to say that there are plenty of unanswered questions still left in this world, and it can be interesting to reflect on them from time to time, particularly when there’s nothing else to do but sit around and wait for something interesting to happen.

Here are 100 such questions—some are deep, philosophical and scientific, and some are funny, weird, stupid, and dumb—that no one knows the answers to yet.

100 Question that no one knows the answer to

Here is a list of most thought provoking and mind blowing questions no one knows the answer to:

1. If I am just going to die anyways, why does anything matter at all?

The need to give meaning to life while struggling with the fear of death is a deep-rooted phenomenon that has been observed throughout history, from religious concepts to existentialist philosophy.

It’s no wonder that most religions posit the notion of an afterlife; for some believers, this makes them feel more confident in living their lives fully here on earth because they know there’s something waiting for them afterwards.

That said, what if there is no such thing as life after death? Then this question remains unanswered forever and make it possible to believe that there is no meaning for life itself. What do you think?

2. How did everything begin? And where will it end up?

As per a scientific theory we know that everything began with a big bang.

However, we may not know where it ends up – if science progresses enough and we finally reach absolute truth.

But today this remains one of humanity’s great mysteries, impossible to be solved because of our limitations (although scientists are trying).

Some say that the yeti is a creature that inhabits the Himalayan region of Nepal and Tibet.

This creature is known to be covered in long brown or reddish hair, to walk on two feet, and to stand over 10 feet tall.

Some eyewitnesses report that this creature leaves behind large footprints in snow, mud, or dirt.

Over the years many expeditions have been made in order to find evidence of this elusive animal but none has yet succeeded. And still, no one knows the answer to this question.

Also read: 100 Questions no one ever asks (deep, funny & weird discussions about random things in life)

4. What is the color of dark matter?

Dark matter accounts for 27% of the total mass-energy content in our universe, however we don’t know what it actually consists of.

Scientists assume that it’s not composed of baryonic particles, but the vast majority of it is still unknown.

5. Did any other writer help and publish Shakespeare’s works?

We know for sure that William Shakespeare was a famous playwright and poet in 16th century England.

Many experts have speculated who he might have collaborated with on his work or if he didn’t, in fact, write any of his plays himself. One thing is for sure: we’ll never know the answer to this question.

6. Are there things in reality we’ll never know?

Some say we can never really know anything at all, while others say some things will always remain a mystery. What’s your opinion on whether or not we can ever really understand everything?

7. What is the sound of one hand clapping?

This is a Buddhist riddle. A lot of people have come up with answers to this question, but nobody knows the correct one.

Some say it’s not possible to clap with one hand and others say that the sound of one hand clapping is silence.

Death has become a very important topic since antiquity, and no matter what religion or culture we come from, it’s a reality that affects us all.

Our eventual death – and what comes after – remains shrouded in mystery.

9. What is inside the human consciousness?

It’s a question that has baffled thinkers for centuries.

On one hand, it’s believed that we can’t know the contents of the human consciousness.

Because we cannot experience what it is like to be someone else and therefore we don’t have access to their thoughts and feelings and where do they actually come from?

On the other hand, there are those who argue that it’s possible to gain insight into a person’s internal world through reading about their life or by empathizing with their experiences.

But even if this were true, would understanding what is inside another person’s mind tell us what is in our own?

This is a question that most people have asked themselves at least once in their life.

For example, we imagine different outcomes and then choose one of them, or maybe the impossibility becomes possible when it’s imagined.

If you can answer this question, share your imagination in the comments to let others know how your mind actually works.

Deep Questions nobody knows the answers to

The following are some of the toughest and deep questions nobody knows the answers to:

1. Why is there so much violence and war in this world?

2. Are we living on borrowed time or giving time back?

4. When will humans be able to fly?

5. Should we let machines take over our minds?

7. Who would win in a fight between aliens and humans?

8. Why do some people prefer introversion while others prefer extroversion?

9. What is happening with today’s youth?

10. Why do people get attracted to each other?

11. Would an android make a good friend?

12. How did human beings evolve from nothingness?

14. What determines how things happen?

Funny questions that no one knows the answer to

Here is a list of Weird questions that no one knows the answers funny:

1. If olive oil is made from olive, then what does baby oil come from?

2. How can a five-year old be going on four?

3. If someone with multiple personalities threatens to kill himself, is it considered a hostage situation?

5. Why didn’t Noah swat those two mosquitoes before they bit him and caused all that trouble with insects getting onto both of his shoulders at once?

7. What was God doing before he created heaven and earth?

8. What color is an orange in the dark?

9. Why do we have eyebrows but not eye brows?

10. When you remove your socks after a long day, why do your feet feel so much colder than when you put them on in the morning or afternoon?

Stupid and dumb questions no one knows the answer to

Here is a list of dumb and stupid questions that no knows the answer to:

1. How did Nero know there were Christians to persecute?

3. Why are tables round in a round table conference?

4. How many licks does it take to get to the center of a Tootsie Pop?

5. What goes around in circles but never moves?

6. Can you call 911 on an AT&T phone by accident without having any credit or calling plan activated?

7. Why do people usually skip Friday the 13th?

8. What happens to a person who forgets how to breathe under pressure?

9. Who came up with Daylight Savings Time anyway?

Random questions no one knows the answers to

Here is a list of Very random questions no knows the answer to:

1. What is a white hole made out of and where does it lead to in space-time continuum theory?

2. Where do dreams come from?

3. What is the evolutionary goal of life on Earth?

4. Is humankind evolving too fast?

5. How can science solve ethical dilemmas?

6. What is the relationship between culture and science and technology?

7. Where did humanity originate from originally as a species?

8. Why are some people more intelligent than others, is it genetic or an accident?

9. What is the essence of being alive?

10. What happens before life?

Science questions no one knows the answer to

Unsolved mysteries have been baffling us since the beginning of time, and new questions continue to pop up every day. Do you know the answers to these mysteries?

Here is a of scientific questions no one knows the answer to and even these questions that cannot be answered by science:

1. What is The Singularity and what will it mean for Humanity?

2. Who creates The Singularity?

3. What will be the future state of AI?

5. Does death have a purpose?

6. What is the ultimate fate of human consciousness

8. What is the meaning of everything that happen to us?

9. What is the truth about destiny?

11. Is there a higher power controlling us?

12. What is quantum physics and can it explain human behavior and mind processes?

Also read: 30+ Questions that are impossible to answer (very deep and funny)

Philosophical questions no one knows the answer to

The unfortunate thing about life is that we never know what the future holds for us. We could die tomorrow, or we could live for another hundred years.

But the one thing that remains certain is that we’ll never know what’s going to happen next.

Here is a list of Mind boggling, Intellectual and philosophical questions no one knows the answer to and questions that make you think deeply:

1. Is there something else to life, after death or prior to birth?

2. Why do people always seem to gravitate towards negative thoughts and emotions instead of positive ones like joy, happiness, peace, etc.?

4. How surreality affects the human brain?

5. Why do people want to know what they don’t already know?

6. Is there a plan for human evolution in the cosmos?

7. How can we better use science and spirituality to understand and explore the human mind, body, consciousness, energy and existence?

8. Who decides that certain things happen or don’t happen in life?

9. What does it take to have a meaningful life?

10. What is the function of existence?

11. How to achieve ultimate enlightenment?